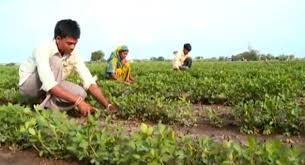 The last one decade appears to have witnessed a major change in Gujarat’s rural scenario. While there has been a sharp rise in the number of agricultural workers, perhaps one of the highest in India, there has been a simultaneous near-stagnation in the number of cultivators in the state. While it would be for economists and other experts to conclude what exactly this trend suggests, clearly, the latest Census of India data for 2011, released in early May 2013, go to suggest that there has been a sharp proletarianization of Gujarat’s rural areas, unprecedented in recent decades.

By “main workers” is meant “those who had worked for the major part of the year preceding the date of enumeration i.e., those who were engaged in any economically productive activity for 183 days (or six months) or more during the year”, to quote from an expert source. As against this, “marginal workers were those who worked any time at all in the year preceding the enumeration but did not work for a major part of the year, i.e., those who worked for less than 183 days (or six months)”, adds the source (Indian District Database, University of Maryland).

What is particularly significant is that, during the decade in question (2001-11), the total number of those who had farming as their main activity – “cultivators” in the Census of India terminology – rose from from 47 lakh to 48 lakh, a rise of just about 2.13 per cent.  This suggests that the number of those who depend on farming as their activity has stagnated – rise of was of just about 0.21 per cent per year. This is against the rise in population of Gujarat by 19 per cent in the decade, from 5.07 crore to 6.04 crore – which shows an annual rise of less than two per cent.  Significantly, the total number of “main workers” in Gujarat also rose by about the same proportion as the state population, 19 per cent, from 1.70 crore in 2001 to 2.03 crore in 2011.

Equally important is the fact that the number “marginal cultivators”, whose activity is farming for less than six months a year,  rose  very sharply, from seven lakh to 11 lakh, a rise of a whopping 57 per cent, suggesting a sharp marginalization of the workforce in Gujarat’s farm sector, which is increasingly moving towards a capitalist form of agriculture. Studies have suggested that as and when capitalism takes its hold in agriculture, the cultivators either stagnate, or get marginalized. There is reason to believe that a huge labour supply in the state’s rural areas is a major reason why agricultural wages in Gujarat are low.

A Cambridge University Press publication on agrarian capitalism and rural labour in the context of Chile, by Claudio Robles-Ortiz, argues how this happened in the South American continent. He says, it resulted in the marginalization of the peasant enterprises operated by tenants and the gradual proletarianization of the agricultural workforce.

Of course, in Gujarat and in India, things may have not taken the way these had in Chile, starting with the early 20th century, when the development of agrarian capitalism transformed the collective action of rural workers, which assumed modern forms such as strikes and unionization, and thus became significant in national politics. However, there is reason to believe that as time passes, there may be a rise of wave in rural conflicts. This should be understood the context of emerging rural working class in the agrarian expansion of capitalist modernization.

Meanwhile, economists have noted the inability of the industry to “absorb” the workforce released in the agrarian sector as a result of proletarianisation process, especially in Gujarat. Prof Indira Hirway says, for instance, that “The rising capital intensity of the industrial sector is a striking feature in the state. In the year 2007-08 Gujarat ranked first among the 20 major states in terms of fixed capital investment, second in terms of total invested capital and fourth in terms of total number of factories, but the rank dropped to 18th in labour-capital ratio”.

She further says, “The employment generated per crore of capital investment as well as employment generated per crore of output in the industrial sector (ASI) has consistently fallen in the state. In the factory sector, where fixed capital investment has grown by 7.7 percent per year during 1998-2008 and when the total invested capital has grown by 9.1 percent, the number of workers has increased only by 2.8 per cent. “

In fact, she notes, “Between 2004-05 and 2007-08, one finds broadly similar trends in employment status in Gujarat and India: In rural areas marginal decline in regular workers, increase in casual workers and (3) decline in self employment – all indicating an increase in the share of wage earners in rural areas. The super high rate of growth of agriculture is not much reflected in the employment status in Gujarat. In the case of urban areas one observes almost stagnant situation in India, while decline self employment and increase in wage labour in Gujarat. Both regular as well as casual wage labour has increased in urban Gujarat.”