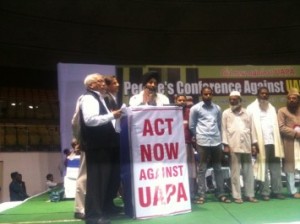 Statement at the end of a hearing in Kizhikode at the People’s Tribunal demending the repeal Of a draconian law:

A two day’s People’s Tribunal was held on cases mainly under Unlawful Activities (Prevention) Act (or UAPA Act) in Kozhikode. The programme was organized by the Solidarity Youth Movement July 14-15. The tribunal heard a range of cases under which people have been booked mainly under UAPA. The accused, family members of the accused as well as lawyers presented facts, documents as well as their experiences to the tribunal. On the basis of these presentations, and after perusing the police and court documents, the tribunal made a few recommendations. The tribunal heard several cases. Important ones among them were:

1. Mavelikara Maoist Case: On December 29, 2012, police picked seven people including two minor girls from a lodge in Mavelikara for their alleged Maoist links. Later police released two minor and registered the arrest of five people under Unlawful Activities (Prevention) Act 1967. Police alleges that Rajesh, Bahuleyan, Shiyas, Devarajan and Gopalan, members of a banned organization, Communist Party of India (Maoist), kidnapped two minor girls Ami and Savera and took room in a lodge in Mavelikara and tried to make them members in the student wing of the above said banned organization and conspired to do unlawful activities. The National Investigation Agency (NIA) has taken over the case.

2. Hubli Conspiracy Case as against Yahiya Kammukkutti: Yahiya is accused number nine in Hubli conspiracy case. Police accused that, being a member of the banned organization SIMI, he allegedly attended a meeting conducted in Castlerock (Karnataka-Goa border) which was attended by around 30 members including SafdarNagori, leader of the banned organization in 2007. Yahiya allegedly spoke about Jihadi activities and was allegedly involved in a conspiracy meeting to conduct blast in some important institutions like Kaiga Thermal power plant, Infosys, Dell etc in Karnataka. He has been in Dharward Jail as an undertrial for last five years. Even though the apex court has ordered several times to finish the trial expeditiously, the trial court continues to hear the case at a snail pace.

3. Kalamasseri Bus Burning Case (against SufiyaMaudany): Sufiya Maudany is accused number 10th in Kalamasseri bus burning case. The incident is said to have happened on September 9, 2005. A bus belonged to the Tamil Nadu Transport Corporation was burnt near Kalamasseri on that day allegedly in retaliation to the continued detention of Abdul Nasar Maudany in Coimbatore jail. The case was handed over to NIA. The trial is not yet started.

5. Panayikulam SIMI Case: On August 15, 2006, 18 people from Panayikkulam were picked by the police accusing them of conducting a secret meeting under the banned organization SIMI. After completing a primary level inquiry, police released 13 people and registered case against five. Later, the police included the earlier freed 13 people in the accused list, as one of them became approver. But the organizers denied the police version of the secret meeting. It is claimed that the programme was held as a public speech on the Role of Muslims in Indian Freedom Fight which was organized by a well-known local cultural group called Islamic Youth Movement.

6. The 2008 Banglore Blast Case as against Abdul NaserMaudany, SakariyaMohammed Shemeer, Manaf and Sharafudeen: The Bangalore bomb blast occurred at in Banglore on July 25, 2008. A series of low intensity bombs exploded at various places in which one woman got killed. Among the 32 accused, 26 people are Malayalees, including Abdul NaserMaudany. Maudany has been in jail for the last four years as under-trial. Despite of his critical health condition, his bail applications were continuously being rejected.

7. K K Shahina’s Case: This prominent journalist in Kerala was being accused of threatening two prosecution witnesses against Abdul Nasser Maudanyin 2008 Banglore blast case. Shahina had interviewed two witnesses, Rafeeq and Yogananda in Kodagu, Karnataka, for Tehelka. The report published in Tehelka stated that the witnesses had spoken to Shahina, contradicting the police version.

8. DHRM, Varkala Case: Some members of the Dalit Human Rights Movements (DHRM) were accused in a murder that took place in Varkala in Thiruvananthapuram, in 2009. This was followed by widespread news against the organization in the media which even tried to portray it as a terrorist group.

The tribunal worked out several recommendations.

The draconian law, Unlawful Activities ( Prevention Act) 1967 should be repealed for the following reasons: (a) It violates the basic human, democratic and fundamental rights provided by the constitution of India to its citizens; (b) This draconian law is widely being misused all over India; (c) UAPA has been extensively misused against human right activists, social activists, members of minority community,  the marginalized, the Dalits and the Adivasis; (d) Its application creates communal disharmony and widens disparities and discontent among people, denying the right to dissent, at same time making them criminals.

There is a need to provide adequate compensation to those who had been acquitted in UAPA related cases and wrongfully detained in Jail or were in police custody. Bar associations and bar councils should direct all advocates on their rolls not to keep away from defending the accused in UAPA-related cases for the reason that they have been treated as terrorists. Concerned governments should prosecute all police officers and Officials who have been responsible for fabricated cases against innocent persons terming them as terrorists, Maoists or insurgents and recover the compensation paid to the victims of false Imprisonment or Illegal detention from them.

The governments in charge should place cases before the respective courts within 90 days from the date of the arrest or the detention of the accused, and in the event of failure to do so, the accused should be released on bail.  The governments should make auditing of accounts of all central intelligence and investigating agencies compulsory. They should regularly publish white paper on all cases registered under the UAPA, as also an action taken report.

Apart from the tribunal there was an expert panel consists of Mehmood Pracha, a lawyer who has fought more than 70 terror cases across the country, including the cases of Mirza Himayat Beg who was convicted to death sentence by sessions court of Pune in German Bakery Bomb Blast case; journalist Muhammed Ahmed Quasimi’s case of Israeli Diplomat Car Bomb Blast cas; Father Cedric Prakash,  a human rights activist and a Jesuit priest based in the city of Ahmedabad in western India. He is the director of Prashant, Ahmedabad-based Jesuit Centre for Human Rights, Justice and Peace.