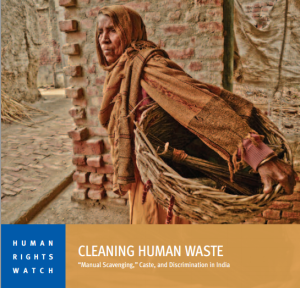 The practice of manually cleaning excrement from private and public dry toilets and open drains persists in several parts of South Asia. Across much of India, consistent with centuries-old feudal and caste-based custom, women from communities that traditionally worked as “manual scavengers,” still collect human waste on a daily basis, load it into cane baskets or metal troughs, and carry it away on their heads for disposal at the outskirts of the settlement. India’s central government since independence in 1947 has adopted legislative and policy efforts to end manual scavenging. In recent years these include commitments to modernize sanitation so there is no further need for manual disposal of feces, and prohibitions on engaging anyone to do this work.

However, because these policies are not properly implemented, people remain unaware of their right to refuse this role, and those who do refuse may face intense social pressure, including threats of violence and expulsion from their village, often with the complicity of local government officials. Manual scavengers are usually from caste groups customarily relegated to the bottom of the caste hierarchy and confined to livelihood tasks viewed as deplorable or deemed too menial by higher caste groups. Their caste-designated occupation reinforces the social stigma that they are unclean or “untouchable” and perpetuates widespread discrimination.

Women usually clean dry toilets, men and women clean excrement from open defecation sites, gutters, and drains, and men are called upon to do the more physically demanding work of cleaning sewers and septic tanks. Ashif Shaikh, founder and convener of the Rashtriya Garima Abhiyan, a grassroots campaign against manual scavenging, explained the systematic discrimination that emerges from this practice:”The manual carrying of human feces is not a form of employment, but an injustice akin to slavery. It is one of the most prominent forms of discrimination against Dalits, and it is central to the violation of their human rights.”

In Kasela village in Uttar Pradesh state’s Etah district, women from 12 families manually clean toilets with the full knowledge of village authorities. After spending the morning manually removing excrement from the toilets, the women return to the houses they cleaned to collect leftover food as payment. They are given grain donations at the harvest and old clothes at festival times, but receive no cash wages. Munnidevi told Human Rights Watch she stopped going to homes where she was not given any food, but says she returned to work after her employers warned that she would not be able to enter community land to collect firewood or graze her livestock. “I have to go. If I miss a single day, I am threatened,” she said.

On September 6, 2013, the Indian Parliament passed The Prohibition of Employment as Manual Scavengers and Their Rehabilitation Act, 2013 (the 2013 Act), committing itself yet again to ending manual scavenging. Seven months later, on March 27, 2014, the Indian Supreme Court held that India’s constitution requires state intervention to end manual scavenging and “rehabilitate” all people engaged in the practice. This meant not only ending the practice but also ending the abuses faced by communities engaged in manual scavenging. The government’s recognition in the 2013 Act of the historically rooted and ongoing injustice faced by communities engaged in manual scavenging is important, but also points to failures in implementing previous laws and policies to address the problem.

Recent examples from communities engaged in manual scavenging in the states of Gujarat, Madhya Pradesh, Maharashtra, Rajasthan, and Uttar Pradesh highlight the failures of previous government attempts to end manual scavenging and eliminate the entrenched attitudes and discriminatory practices that still bind members of affected communities to this degrading and unnecessary occupation. For instance, several women who sought to leave manual scavenging told Human Rights Watch that local authorities failed to intervene when they faced threats from the households they served.  As retribution for leaving, they were denied access to community land and resources or threatened with eviction, frequently with the backing of village councils and other officials.

While the central government enacts laws, state representatives in panchayats, elected village councils, and municipal corporations too often not only fail to implement prohibitions on manual scavenging by private households, but also perpetuate the practice. In Maharashtra state, for instance, panchayats have recruited people to manually clean toilets and open defecation areas on the basis of their caste, even denying them other jobs for which they are qualified within the panchayat. While panchayats compensate families that clean dry toilets, drains, and open defecation sites with housing and wages, many of those employed told Human Rights Watch that they are denied regular wages and have been warned that they will be evicted from their houses if they refuse manual scavenging work.

The panchayat in Nhavi village in Maharashtra’s Jalgaon district hired nine women and men to manually clean open defecation sites. Bimal told Human Rights Watch that she does not want to clean excrement, but has continued to do so because she fears her family will be thrown out of the home where she lives: We have farming and labor work, but then if I go for farming work I get threats from the panchayat—“If you don’t work, empty the house. I am afraid to lose my house. If I had a place to live I would not do this dirty work.” Bimal’s husband, Kailash, has a college education, but began manually cleaning toilets in Nhavi in 1989 when he was unable to find alternate employment. He said, “I studied commerce and banking, but I couldn’t find work. Even though I am educated, the panchayat hired me to clean toilets because I am from this community.”

Human Rights Watch also found some instances in which women and men from the Valmiki caste are engaged by urban municipal corporations, both directly by the government and through contractors, to manually clean excrement. A municipal corporation worker, who has worked as a safai karmachari, or sanitation worker, for the Bharatpur municipal corporation since 2004 explained her work: “I clean my area, these two lanes. I clean twice a day because it is so dirty. I sweep the roads and I clean the drains. It is extremely dirty because the houses here flush the excrement from the toilets directly into the drains. I have to pick out the excreta, along with any garbage from the drains. I have to do it. If I do not, I will lose my job.”

Some women said they faced threats of violence when they refused to practice manual scavenging. In November 2012, when Gangashri along with 12 other women in Parigama village in Uttar Pradesh’s Mainpuri district voluntarily stopped cleaning dry toilets, men from the dominant Thakur caste came to their homes and threatened to deny them grazing rights and expel them from the village. Despite these threats, the women refused to return to manual scavenging. Soon after, some 20 to 30 upper caste men from Parigama confronted the community. Gangashri recalls: “They called our men and said ‘If you don’t start sending your women to clean our toilets, we will beat them up. We will beat you up.’ They said, ‘We will not let you live in peace.’ We were afraid.”

Such threats have been particularly effective in binding communities to manual scavenging because the affected communities face extreme difficulty in securing police protection. They are especially vulnerable to police refusal to register complaints due to caste bias by police and local government officials. The rights abuses suffered by people who practice manual scavenging are mutually reinforcing. Constantly handling human excreta without protection can have severe health consequences.

Superseding the 1993 Act, the 2013 Act goes beyond prohibitions on dry latrines, and outlaws all manual excrement cleaning of insanitary latrines, open drains, or pits. And, importantly, it recognizes a constitutional obligation to correct the historical injustice and indignity suffered by manual scavenging communities by providing alternate livelihoods and other assistance. However, women we spoke with who left manual scavenging, even those who had the support of community-based civil society initiatives, reported significant barriers to accessing housing, employment, and support from existing government programs aimed at their rehabilitation.

Notably, under the 2013 Act, rehabilitation provisions are left to be implemented under existing central and state government schemes—the same set of programs that, to date, have not succeeded in ending manual scavenging. India’s Supreme Court has ruled that the practice of manual scavenging violates international human rights law, including protections found in the Universal Declaration of Human Rights (UDHR), the International Convention on the Elimination of All Forms of Racial Discrimination (ICERD), and the Convention on the Elimination of All Forms of Discrimination against Women (CEDAW). India is also a party to other international conventions that reinforce obligations to end manual scavenging. In May 2014, Indians elected a new government.

During his campaign, Prime Minister Narendra Modi highlighted the importance of modernizing India’s sanitation system, saying that building toilets was more important than temples. While modernizing India’s sanitation is an important step in ending manual cleaning of excrement by some of India’s most marginalized communities, investment in sanitation alone is far from sufficient to end the social and economic exclusion faced by these communities. The government’s continued inability to provide individuals the support necessary to leave manual scavenging predictably will undermine the renewed government effort to promote modern sanitation. This is especially true if decisive steps are not taken against local officials who themselves employ people to work as manual scavengers, lessening the urgency of modernizing sanitation practices in their localities.