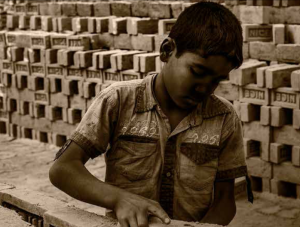 Australia-based Walk Free Foundation, in its new report, “The Global Slavery Index 2014”, has identified India as ranking fifth out of 167 countries of the world in severity of modern slavery. It defines modern slavery as involving “one person possessing or controlling another person in such as a way as to significantly deprive that person of their individual liberty, with the intention of exploiting that person through their use, management, profit, transfer or disposal.” Modern-day slaves, it adds, include children denied an education by being forced to work or marry early, men unable to leave their work because of crushing debts they owe to recruitment agents, and women and girls exploited as unpaid, abused domestic workers. The report estimates, there are 35.8 million people living in some form of modern slavery globally. This is what the report has to say about India:

India’s modern slavery challenges are immense. Across India’s population of over 1.2 billion people, all forms of modern slavery, including inter-generational bonded labour, trafficking for sexual exploitation, and forced marriage, exist. Evidence suggests that members of lower castes and tribes, religious minorities, and migrant workers are disproportionately affected by modern slavery. Modern slavery occurs in brick kilns, carpet weaving, embroidery and other textile manufacturing, forced prostitution, agriculture, domestic servitude, mining, and organised begging rings. Bonded labour is particularly prevalent throughout India, with families enslaved for generations. There are reports of women and children from India and neighbouring countries being recruited with promises of non-existent jobs and later sold for sexual exploitation, or forced into sham marriages.

In some religious groups, pre-pubescent girls are sold for sexual servitude in temples. Recent reports suggest that one child goes missing every eight minutes; it is feared that some are sold into forced begging, domestic work, and commercial sexual exploitation. Bangladeshis and Nepalese, particularly women and children, migrate to India in search of work. Young Nepali women banned from traveling to the Gulf for domestic work also pass through India as an alternative route. Some of these migrants then experience abuse and exploitation. Other migrants are fraudulently sent by recruiters to India to be transported to jobs in the Gulf, only to remain in India in positions of forced labour or commercial sexual exploitation.

Given the scale and complexity of the response required in India, it is significant that the Indian Government has taken steps to better communicate key elements of its anti-trafficking response. In 2014, the Ministry of Home Affairs launched the ‘anti-trafficking portal’, which includes information on criminal justice statistics, anti-trafficking police units, government and law enforcement training, the anti-trafficking legislation, and reporting mechanisms, including the ChildLine hotline number. The portal does not appear to provide information about forced or bonded labour, which reflects a broader institutional separation between responses to bonded labour, which is the responsibility of the Department of Labour, and human trafficking, which is the responsibility of the Ministry of Justice. On paper, criminal justice reforms specific to human trafficking are the strongest component of India’s response to modern slavery.

In 2013, the government amended the Indian Penal code to include specific anti-trafficking provisions. In 2014, the government expanded the number of police anti-human trafficking units across the country to 215 units, aiming to establish a unit in 650 districts. The judiciary and over 20,000 law enforcement have received training on victim identification, the new legal framework, and victim-centered investigations. The government’s victim compensation scheme extends to human trafficking victims, however, the amount and efficiency of dispersal is largely dependent on the State administration, and is not available country-wide. Although bonded labour is criminalised, it is still a significant issue.

The government response to bonded labour is monitored by the National Human Rights Commission that reviews existing policies and practices, and provides training to district Magistrates, Deputy Commissioners, and other government officials. Reports suggest that most States are yet to implement the Supreme Court Order which required District Vigilance committees to undertake surveys to identify and release those in bonded labour, as already required by the Bonded Labour Act. The State of Karnataka is an exception and has made progress on the Order. Efforts need to be directed toward expanding and improving victim support services.

The Ujjawala project is a victim support programme that provides rescue, rehabilitation, and reintegration services for commercial sexual exploitation victims, and trafficking prevention initiatives. In addition, the SWADHAR GREH scheme provides temporary accommodation and rehabilitation services for women and girls, including survivors of trafficking. While government shelters are required to register, there are no standards attached to registration, and no inspections or followup. The shelters have limited facilities and resources to provide holistic support and are currently only available for women and girls. Of particular concern are reports of traffickers re-recruiting women into trafficking from shelters.

Indian police are beginning to collaborate with regional counterparts on transnational human trafficking investigations. In 2014, Indian and Bangladeshi police undertook a joint investigation to identify two Bangladeshi girls sold into commercial sexual exploitation in India. Both girls were found and successfully repatriated; the offenders are being prosecuted under new anti-trafficking provisions.

Dalits have the least social protections and are highly vulnerable to severe forms of exploitation and modern slavery. The limited ability for people to move out of this group increases their vulnerability. Approximately 90 percent of India’s labourers are in the informal economy, presenting risks associated with a highly unregulated and unmonitored work environment. Women and girls face significant discrimination and high rates of sexual violence across India.

While Prime Minister Narendra Modi referred to a string of rapes as a national ‘shame’, and there has been a raft of legislative and criminal justice reforms signalling some progress, women are still at risk of sexual assault and domestic violence. The rates of forced and servile marriage continue to trap women and girls in cycles of domestic servitude with few opportunities for education, meaningful employment or access to reproductive rights. Indian migrant workers actively seek jobs in construction and care industries, primarily in the Gulf, Europe and North America. From 2012 to 2015, there were more people leaving India than arriving, with most migrants seeking work through their networks rather than formal channels.29 Official migration processes are complex and often tainted by corruption, which further encourages irregular migration. These channels leave migrants with little recourse against practices such as unilateral contracts, dangerous working and living conditions, limited movement and access to communications, withholding of passports and wages, and physical and sexual abuse.