In the past two decades, the girl child has been a subject of both rhetoric and action. Many positive steps have been taken to secure her rights. While increased participation and enrolment of girls in schools is a positive step, we do see an increased backlash which runs parallel to her progress/ aspirations in the public sphere such as education or employment and is expressed in the form of rise in cases of rapes, harassment for dowry, female foeticide etc. Government and civil society must renew their commitment to child rights by securing the right of girls – particularly her right to be born and to live in a secure world as an equal citizen, says the executive summary of “Wings 2014. The World of India’s Girls: A Status Report”:

India today stands at a unique place in history: we are  a young country (over 65% of the population is below  the age of 35 years; and 39% is 18 years or below)1; a  country that has seen the emergence of a middle class of  over 60 million2 making it a hub of consumerism and private  enterprise; a country whose economy has quadrupled  between 1991 – 20113 when the first wave of economic  reforms was unleashed.    The demographic and economic change has been  accompanied by a fundamental change of attitude on issues  of governance.

Through participation in a number of mass  agitations and vigorous voting in the recent elections,  the confident and assertive youth have expressed their  aspiration to see India emerging as a developed nation free  from corruption. Amidst this climate of hope, aspiration and  dramatic growth, the girl child is beginning to dream and  aspire. However, her family and the society at large have not  kept pace with her aspirations. More than twenty years after  the country opened its economy to the world putting itself  on fast track of growth, the girl child remains an object of    neglect, malnutrition, exploitation, rape, brutality, and murder, despite the many positive steps taken to secure her rights.

Given the sheer number of girls in the country who are 18  years or below – close to 225 million – it becomes crucial to  pay urgent attention to the status of the girl child.

The discrimination against the girl child starts even before she is born. Even after she is (allowed to be) born, widespread neglect makes her survival precarious during early childhood.  Together, these two factors ensure that we bear the tragic burden of being a nation of disappearing daughters – as many  as 36 million of them.

The Census-2011 revealed a deficit of 7.1 million girls as against boys in the 0–6 age group a sizable  increase over Census-2001 (6 million) and Census-1991 (4.2  million).  The reasons for this ‘missing girls’ phenomenon are not far to seek. Deep gender inequities still remain, as do the preoccupation with ‘son preference’ manifested in the horrific practice of female foeticide.

This cuts across classes and according to a study published in Lancet, is most prevalent among the most educated and the richest 20% households.  NFHS data corroborates this, showing that both Child Sex  Ratio (CSR) and Sex Ratio at Birth (SRB) vary in inverse  proportion to wealth; the highest SRB is reported by the  lowest wealth quintile (954 females per 1000 males).

Also, Muslims – a community with lower social and economic indices – have an increasing CSR. These facts defy the old notions such as ‘poor/uneducated families are more likely to commit female foeticide’.  The first step, right after birth — and a crucial determinant of survival — is immunization, which is where we find, she is less likely to get full immunization, as opposed to her male siblings.

The proportion of male children who are fully immunized is 4% higher than female children. The same trend continues in the case of health & nutrition. As time passes, nutritional outcomes for both boys and girls in 1-4 years age group seem to decline. However, they decline much faster for girls.  By the time girls are 4 years old, they are much more likely than their brothers to be stunted, underweight, and have low  Mid Upper Arm Circumference (widely considered the best  measure of under-nutrition).

In the sphere of education, there has been an across-the-board  rise in enrollment of girls, largely due to the Right to  Education Act getting enforced in 2010, as well as concerted  government drives towards boosting enrolment. According  to DISE data, as against 40 million girls in 1990-91, approx. 65  million were enrolled in school in 2010-11.  However, education is still marked by gender inequity.

In 2012, 58% of all private school children in the age group  of 6-14 years were boys. Data also indicates that girls with special needs have lesser access to education than their male  counterparts – roughly in the proportion of 45% v/s 55%.  Although school enrolments have shown an upward trend over the past decades, retention and consequently transitions to successive cycles of education are a matter of concern.

Child protection finds place in the UNCRC framework in the form of a set of rights that protect children from abuse, exploitation and violence. In case of the girl child, there is an intersection of disadvantage — of being a child and being a girl — and the protection needs therefore, become multidimensional. Violence against the girl child is perpetrated in families, households and in larger common spaces and occurs through all stages of growing up.

The report adopts the ‘systems approach’ to discuss these protection issues, picking up early marriage as a subject of detailed discussion. The NFHS-3 estimated that as many as 47% of the women reported to have been married by 18 years of age. In fact, estimates project that 130 million girls in South Asia will be married as children between 2010 and 2030. The moment a girl hits adolescence the parents want to get her married off due to concerns over her safety.

Parents and community members feel that, “early marriage protects  the girl’s marriageability which can be destroyed by premarital  sexual violence or choice”. This can be corroborated by the fact that in times of conflict or disasters when the social order is shaken, girls are married off even earlier, as seen  subsequent to the communal  clashes in Muzaffarnagar (Uttar  Pradesh).

There are other manifestations of the abuse that await a girl child, most primarily in the form of sexual abuse. One of the biggest hurdles in studying abuse is the lack of credible and substantial statistical evidence of violence.  A study by Ministry of Women & Child Development (2007) reveals that 45.3% of the children experiencing abuse were girls. NFHS 3 indicated that of all reported cases of sexual abuse in India, 14.2% girls experienced the first incidence of sexual violence between the ages 15 to 19 years, 4.8% were abused first between the age of 10 to 15 years and 0.4% between the age of 0 to 10 years.

This seems to indicate that  girls in the 15-19 age group are most vulnerable to the risk  of sexual abuse.  Sexual abuse of girls (mostly unreported, which means that  we have misleading statistics about crimes against girls) is  prevalent in every space, including, ironically, the spaces  designed to protect her: her home/family, institutional care  centres and all public spaces. And yet, there was no separate  provision in the Indian Penal Code for sexual offences  against children till the Code was amended in 2013 and the  Protection of Children from Sexual Offences Act was passed  as recently as in 2012.

Institutionalized sexual abuse plays out through trafficking  where young girls are sold within and across countries,  although there are non-sexual reasons for trafficking young  girls as well. The exact numbers of trafficked children are  hard to find, and hence the actual magnitude of the problem  remains unknown.  This brings us to the third type of exploitation faced by the girl  child – one that happens at the workplace.

While feminization  of the Indian workforce and the invisible contribution of  women to the economy have been covered vastly by feminist  economists worldwide, this invisibility also holds true for the  girl child’s participation in the workforce. Outside her own  home, the girl child is a common sight in many urban homes,  working as a domestic worker in inhuman conditions, and  often subjected to abuse.  The report weighs these  formidable issues against  the resources invested by  the State in social sector in  general and in protecting,  nourishing and educating  the girls in particular.

We see a trend of decline in  public investment in the  social sector and a marginal  share of the girl child in the  budget of the ministry that  is primarily responsible for  protecting her interests.  Overall, in the last two decades, the share of Health and  Education in total social sector expenditure by all states fell  from 16% and 52.2% (1990-91) to 11.7% and 45.8% (2006-  07) respectively. As a result, the per capita health expenditure  in India (Rs 96) is much lower than that in China and USA  (Rs.261 and Rs.5274 respectively)5.

As far as the girl child  is concerned, over the last three financial years, out of a  total annual outlay of Rs15000-17000 crore allocated to the  Ministry of Women & Child Development, the total share of  the major girl-centric schemes ranged between Rs.477 crore  to Rs.681 crore (a mere 3.1-4.4% of the total).  In the face of these crippling realities, there have also been  some encouraging developments in the last two decades that  bode well for the girl child. In this regard, India’s signing of the  UNCRC in 1989 was possibly the most significant landmark  of the Nineties.

Government of India has certainly prioritized child protection  after 2005. The recent and widely discussed legislation  has been the one on sexual assault, pushed forth after the  Nirbhaya tragedy (2012), which has expanded the definition  of sexual assault to include molestation, stalking, acid attacks  and so on; in a parallel development, legal processes too have  also been made more child friendly and gender sensitive such as the Supreme Court  ruling against the ghastly use  of the “two finger test” to  establish rape. 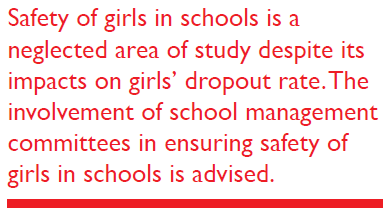 Apart from the RTE Act,  Sarva Shiksha Abhiyan (the  national flagship program on  education that focuses on the  universalisation of primary  education), KGBV Scheme  which provides residential school facilities to girls in remote  and backward areas and National Programme for Education  of Girls at the Elementary Level (NPEGEL) that works  towards ensuring that girls don’t drop out, are some of the  important milestones in the education sector.  One of the first important announcements made by the new  government that took charge at the Centre in May 2014 was  regarding the Beti Padhao-Beti Bachao scheme, launched with  the twin objectives of protecting and educating the girl child.  In the health sector, programs such as Rashtriya Kishor  Swasthya Karyakram (RKSK) which focuses on the adolescent  population to not only provide supplementary nutrition but  also to address other issues that adolescents face, are a step  in the right direction.

The government has also realized the  need to provide crèches for children of working women  under the ICDS structure, so as to unburden the adolescent  girls of their household duties.  Additionally, to battle trafficking, anti-trafficking units have  been set up, along with efforts at training police personnel  on tracking the victims of trafficking in pockets where  trafficking is prevalent. Policy now also recognizes the fact  that trafficking is an organized crime so that “agencies” can  be brought to book.

Aside from these significant changes, perhaps the most  vital shift taking place is the shift away from the traditional  approach of looking at the girl child as ‘someone’s-wife,  sister or simply a mother-in-waiting’. Policymakers have now  shifted their paradigm from the ‘lifecycle approach’ to the  ‘capabilities approach’ which recognizes the girl child as an  individual in her own right. The 11th Five Year Plan asserts  that adolescent girls need to be recognized as “individuals  with human rights” rather than just as “prospective”  mothers.