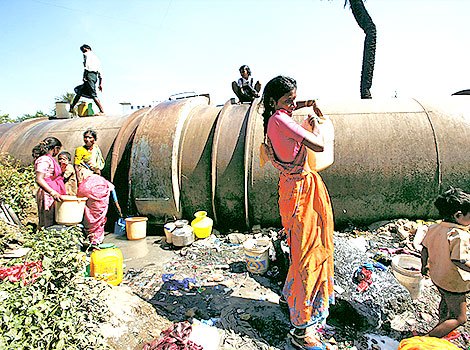 In a landmark judgment dated Dec 15, 2014, Mumbai High Court bench of Justices Abhay S Oka and A S Gadkari have ruled: “Right to get water is an integral part of right to life under Article 21 of the Constitution of India…” A rejoiced Sitaram Shelar of petitioner Pani Haq Samiti noted in press release on the day of the judgment, “Reinforcing the intrinsic relationship between water and life, the judgment established that the right to water is as fundamental as the right to life… Pani Haq Samiti will continue the struggle towards ensuring that those living in slums access their right to water.”

Through this case, the apathy of the middle class and a few mainstream political parties towards those living in slums has become evident. Adv Mihir Desai representing Pani Haq Samiti has been instrumental in reinforcing the fact that water is a right and cannot be seen within the purview of slums and illegality alone. Samiti says: “For all those fighting for the right to water in the country, this is a historic judgment. This is the first time that it has been stated that in order to realise Article 21, access to water is essential. Till date there has been no law in India that mandates water to all. The judgment is a great impetus to movements across the country fighting for the basic rights of people.”

The impact of lack of water has impacted both, people as well as the MCGM. Negative impacts of the lack of water supply that have been borne by the Corporation include:  an increase in the amount of unaccounted for water (UWF); emergence of the water mafia through which illegal connections and leakages increased; increased contamination of water lines; lastly, revenue that could be earned by the MCGM was being pocketed by the water mafia. Various studies conducted by YUVA, TISS and other organizations on the impact of lack of access to water in slums has found that: Access to water has been only through the water mafia; while buildings are provided 1000 litres of water for Rs 4, the water mafia charge Rs 1000 for 1000 litres of water in slums – water has become a financial burden as 30 to 40 percent of a family’s income was spent on water. 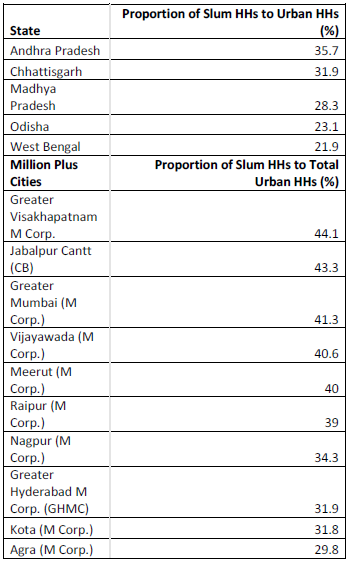 While the cities of India are undergoing a transition phase in the form of rapid developments of modernized apartments, industries and commercial complexes, the ingress of labor and job seekers from other parts of the country, added to the fact that availability of land is now a highly contested resource – the urban areas has seen a prolific development of the informal settlements or the slums.

As per census of India, “Slum” has been defined as residential areas where dwellings are unfit for human habitation by reasons of dilapidation, overcrowding, faulty arrangements and design of such buildings, narrowness or faulty arrangement of street, lack of ventilation, light, water or sanitation facilities or any combination of these factors which are detrimental to the safety and health. 17.4% (137 lakhs) of Indian households are slum, out of which only 49.65 lakhs of households are ‘Notified Slums’ as per the latest census of 2011.

In many Indian cities and towns facing the challenges of increasing populations and expansion of urban areas, direct access to clean, affordable, and reliable drinking water is a significant challenge, especially to the poor who lives in slums. A per the WHO-UNICEF Joint Monitoring Program’s Report of April, 2014, only 51% of the urban households have coverage of piped onto premises supply of drinking water and 46% are covered by other improved sources.

Most of the slum dwellers in Mumbai lack the basic necessities of life. Despite the fact that many slums have been notified by the government, one tap is shared by more than thousand persons in some of the slum compared to an average of 52 persons per tap. The number of slums in Mumbai which came up after the year 2000 were officially prevented from provision of Municipal water supply.

In 2012, a Public Interest Litigation (no 10 of 2012) was filed by Pani Haq Samiti and others (vs Brihan Mumbai Municipal Corporation and others) in the Bombay High Court challenging the State Government Circular dated 4th March, 1996 which provides that the Local Authorities shall ensure that the water supply is not released to any unauthorized constructions. .  On the basis of this circular, the Municipal Corporation of Greater Mumbai (MCGM) prohibited regularized water connections to nearly 30 lakh people living in post 1995 slums the city. The petition also challenged a rule framed by Mumbai Municipal Corporation which initially provided that the water shall be made available to the structures in existence in slum areas till 1st January 1995, deadline of which is extended till 1st January, 2000. The question was whether the slums which illegally came up after 1st January, 2000 are entitled for water supply or not?

The State Government, however, in their reply stated that there is nothing illegal in the policy of State Government not to grant water supply to residents of illegal slums since the same is being done as State does not want to encourage the construction of such illegal sums and people occupying such illegal slums. The State Government showed concerns that any relief to the petition would mean encouraging the construction of the illegal slums, some of which are in difficult areas of the city like hills where provision of water supply is impossible for the Municipal Corporation. The concerns of encroachment of CRZ areas and forest lands by slums were specifically pointed out to the court and argued that it will lead to irreparable damage to the environment.

In a Chamber Summons filed in support of the contention that the notion that criminals or anti-social elements are staying in the slum areas is without any foundation, the fact that around 4,426 constables and 81 Inspectors of Mumbai Police lives in Slums as per April, 2006 data also came into light. The occupants of post 1st January 1995 slums include employees of Government itself as well as the employees of the Municipal Corporation and other Authorities.

‘In a situation where State Government encourages the creation of jobs, allows the bringing in of migrant labour and work force, makes the city of Mumbai and attraction for job-seeker, the State has done nothing to provide low cost housing in the city’, the judgment quoted a para from the application.

Defining the limitation of Article 21 of Constitution of India to protection of such illegal constructions, the Court stated that the Authorities are under legal obligation to ensure that the illegal constructions do not come up and if they come up the same are effectively and expeditiously demolished by following the due process of law.  But, State cannot deprive a citizen of his fundamental right to food and water which is an integral part of the right to life guaranteed under Article 21 on the ground that he is in occupation of an illegally constructed hut.

While the court directions are certainly a landmark judgment which provides the Right to Water as an integral part of the fundamental right under Article 21 of the constitution, it may not be of any help in eradication of the ‘Water Poverty’ taking into account the situation of slums in Mumbai. The court directions have made it clear that the provision of water supply to such illegal slums may not be as par with the law abiding citizen who is occupying lawfully constructed premises having occupation or completion certificate. It has further stated that the Municipal Corporation is free to provide the water at higher rate than the rate which is charged from authorized construction, which means the slum residents may need to pay higher rates for the water.

In cities like Delhi, the informal settlements depend on community level sources of water supply like community stand posts, hand pumps and tankers. The tankers are one of the major water supply sources but have no fixed timing. The households dependent on hand pumps have 24 hours of water supply but the quality of water is poor due to contamination of groundwater. Households depended on community level water supply have to spend more than one hour to fetch water, many times wasting their sleep as the duration is early morning or late night hours. But there is a high level of readiness to pay if provided improved services.

In such scenario the emphasis by the court for provision of drinking water through public booths on the basis of prepaid cards might be an alternative option for such areas. But it must be ensured that the water supplied by the Municipal Corporation is affordable, reliable in quality as well as accessible to all the households.

Many cities of India like Delhi, Bangalore and water scarce towns like Barmer in Rajasthan are already under the implementation stage of such water booths and the drinking water is provided 24 x 7 at rate of Rs. 5 per 20 liters of water. Last year Delhi Jal Board, the government authority responsible for providing water to Delhi colonies initiated installation of water kiosks in several slums and resettlement colonies with an initial rate of 30 paise per liter. But most of the households still prefer the DJB tankers instead of the water kiosks for day to day work, largely due to the cost involved which is otherwise free in case of tankers.

The Pani Haq Samiti Press statement noted, “Restating that water supply is mandatory despite the legality of structure, the Court ordered the MCGM to submit a water supply proposal on or before February end 2015. As an advice to the MCGM, the Court reiterated a Pani Haq Samiti suggestion that could be included in the proposal, i.e. instead of providing individual connections, group connections could be provided for every 7-15 families as per MCGM water rules. This would help in management of water supply to all areas.” The order adds: “We direct the Municipal Corporation to file an affidavit of compliance on or before 2nd March 2015.”

The judgment can have far reaching implications not only for slum dwellers of Mumbai, but millions of others all over India.