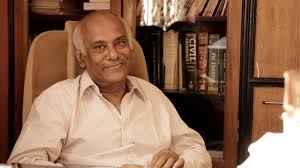 Comrade Mukul – this is how he was known to his colleagues and friends. They gave him a tearful Lal Salaam farewell, as his was brought from the hospital on May 12, 2014 on the way to be donated to the medical college.  We were witness to his last journey… It was emotional to those who had experienced the man, I included.

I had heard about him during my college days, especially his union activities which he had started at the Physical Research Laboratory (PRL), Ahmedabad, where he worked and became union leader. I was fascinated by how he took on the powerful establishment with his “unreasonableness”. This “unreasonableness” was rooted in questioning the injustice meted out to others. As I got to my working life, I would encounter him in meetings, and while many trade unionists looked down at the “development work-wallahs”, Mukul always respected different approaches of engaging with the poor and the unorganized. He had an inclusive approach. He would tell me, “You should do what you can, we will do what we can.”

To human rights activists, he was a relentless fighter for justice to the victims of the 2002 Gujarat riots. And to industrial workers he was a trade unionist and a labour lawyer, who struggled for their rights through the Gujarat Federation of Trade Unions and other trade unions he had founded.

Belonging to Bilaspur, UP, after completing his graduation at IIT-Kanpur in early 1970s,Mukul, who died of small cell cancer at the age of 63 in Ahmedabad, will, however, be remembered by the posterity for his lasting contribution before the Nanavati Commission of Inquiry, set up by the Gujarat government immediately after the 2002 riots.

While many activists and human rights lawyers boycotted the Commission, suggesting it would serve no purpose, Mukul felt that the Inquiry Commission and its establishment was formed as a delaying tactic to cover up the culpability of those responsible for perpetrating the riots. Hence, he decided to use it both to extract vital information as also keep alive the spotlight on 2002 riots.

In fact, the Commission’s hearings proved to an important source of information for the media. There may be reservations on the Commission’s conclusions which gave clean chit to top Gujarat politicians, but thanks to Mukul’s craftsmanship as a lawyer, Justice Nanavati, who headed it, ensured that the hearings were democratic with open access to the media. Some 30-40 journalists wouldregularly follow the proceedings, especially cross examinations.

During the 2002 communal violence, PGJ Nampoothiri, ex-IPS officer, Gujarat cadre, and I formed the special monitoring group, appointed by the National Human Rights Commission (NHRC), chaired then Justice Verma. We were returning from Delhi after a meeting with Justice PD Desai (retd) and Justice Verma, where we worked on a rehabilitation note. We were urgently told that the state government had moved a petition to bar the NHRC from intervening by quickly setting up State Human Rights Commission (a request from civil society denied for years) on jurisdiction grounds.

Not having anybody to appear and having only an hour for the hearing, we requested Mukul, and without much ado, he stood up and surprised the state government, which had thought it would go unopposed. Since the NHRC had taken cognizance of the rehabilitation issue ahead of the SHRC notification, the Gujarat High Court put aside the state government request. While some of us continued with some riot-related cases, Mukul decided to hang on with Godhra and allied cases. Later on, he took up Ishrat Jahan and Sohrabuddin cases. All through, he would steadfastly stand his ground in his effort to prove culpability of the state machinery.

Mukul had a pet theory on the Godhra train burning incident, which came from scientist’s background – that it was impossible for the Sabarmati Express to catch fire by throwing burning rags from outside. He could argue out for hours on how the fire began from inside. In fact, he strongly believed in a conspiracy theory, which he popped up with such conviction that one would be left perplexed. His sources of information were people from within the government, many of whom he had helped in their service matters, including senior policemen.

Mukul was a key proponent of the theory of “command responsibility”. In fact, it would not be wrong to say that he was he influenced the Justice Verma Committee’s report on the infamous Delhi gang rape, which came up with the doctrine of “command responsibility”. According to the Committee, public servants “in command, control or supervision of the police or armed forces”, who failed to contain and allow criminal offences such as murder, rape, destruction of property, etc., should be guilty of the offence of “breach of command responsibility”.  It is another thing that the recommendation was never accepted.

Despite being an avowed leftist, Mukul had a radically different approach to the existing democratic institutions. He disagreed with those who did not have faith in the judiciary. He said, “There is no point in abusing the courts. Instead one should find a way to use them.” Referring to how some human rights lawyers have abused the High Court and the Supreme Court in order to sound radical, he underlined, and one should remember this, “The state can’t give you rights, only the courts can.” He would cite court orders in the fake encounter cases as an example on what could be achieved through courts.

Mukul had travelled a long journey before Mukul took on the state government on communal riots and related issues. After finishing his graduation at IIT-Kanpur in early 1970s, Mukul joined well-known scientific institution in Ahmedabad, Physical Research Laboratory (PRL), in Ahmedabad, to do PhD. But, clearly, his mind was elsewhere. The top research institution faced a lockout and sacked 133 workers. He sided with the workers, and instantly became a trade union leader.

In 1985, Mukul took up the study of law, and joined the bar in 1989, and began fighting the cases for slumdwellers, many of whom were members of the Jan SangharshManch, a people’s organization he had founded. He simultaneously fought as alabour lawyer for the workers as a trade unionist.

Through Jan Sangharsh Manch, Mukul took up issues like slumdwellers’ displacement in Ahmedabad, environment, and pollution. He also took up issues of low wages of drivers and conductors of state transport corporations, and the rights of other sections of society that he felt had been ignored by the government. While Mukul is no more, Jan Sangharsh Manch lives on with a team of dedicated 15plus lawyers, committed to the cause of socio-economic justice.

During the last nine months of his life, despite being diagnosed of cancer, he began a website, http://www.truthofgujarat.com, where he posted articles on issues close to his heart – especially legal cases related with the 2002 riots and fake encounters in Gujarat. His desire for justice was such that one day before his demise, while in ICU, he called his lawyer colleagues to represent for the hearing in the Ishrat Jahan fake encounter case. He told them and his partner and wife of 40 years, Nirjhari, to get access to all the legal documents related to the case.

Those who were with him during his last few days recall how, amidst a series of chemo therapies, he would dictate posts to his son Pratik for the website, discuss elections, listen to songs of trade unions from across the world. I was with him on an Arnab Goswami show of Times Now, and he spared no words to call a spade a bloody shovel.

Otherwise so gentle, his mind was always ticking and whenever I met him, he was positive , hopeful and used to say, “We will get them…”

Will we, now that you are not there???