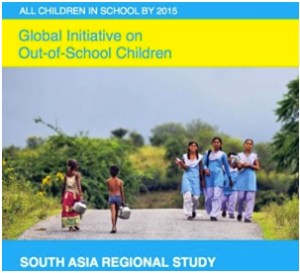 A report released by UNICEF and UNESCO (click HERE to download) on out of school children in India has highlighted that Dalit girls have the highest primary school exclusion rate in India. The report also finds that half of the pre-school age Dalit children are not attending school. The report cites compounding factors such as ingrained social inequalities and poverty among Dalits, to be contributing to higher rates of exclusion. It states, “Humiliation, harassment and abuse by upper caste teachers towards children from Scheduled Castes have been shown to undermine their motivation to stay in school.”

Child labour is identified as a key hindrance to children attending school. It says, “According to the International Labour Organization (ILO), India has the highest number of working children in the world … Most of these children belong to the poorest, most marginalized communities, including Scheduled Castes and Scheduled Tribes.” Another deterrent factor identified in the report is that discrimination in the labour market contributes to low labour market aspirations for Dalit children and therefore reduces the perceived beneﬁts of schooling.

Girls in rural areas, particularly those from Scheduled Castes and Scheduled Tribes in India also have higher rates of exclusion.

Among India’s social and religious communities, two groups stand out as having a higher than average proportion of pre-school children excluded from school based on analysis of NSSO 2007-08 data. About half of pre-school age children from Scheduled Castes and from Muslim families are not attending school, compared to 40 per cent overall.

For some social and religious groups, formal sector job opportunities are limited by discriminatory employment practices. Compounding this, the marginalisation of specific groups in relation to livelihoods goes even further: in India, some low caste communities face physical and well as social segregation from mainstream society, limiting informal economic opportunities too – as well as discrimination in education systems. One report in India concluded that high unemployment rates among low caste communities reduced motivation to send children to school because of the little economic benefi t expected from schooling (Sachar Committee Report, 2006).

In Sri Lanka, high dropout rates are seen in communities that have been historically marginalised from employment opportunities—especially the Indian Tamils who worked in estate plantations (Jayaweera and Gunawardene, 2004). Discrimination in the labour market contributes to low labour market aspirations for children from these communities and reduces the perceived benefits of schooling.

In India, poor or absent water and sanitation facilities have a more significant negative effect on schooling for children from marginalized communities such as those belonging to the low caste, Scheduled Castes and Scheduled Tribes groups (NEGFire Seminar, 2011 as cited in the India OOSCI Study).

In India, studies have shown that corporal punishment contributes to dropping out (Reddy and Sinha, 2010). Humiliation, harassment and abuse by upper caste teachers towards children from Scheduled Castes have been shown to undermine their motivation to stay in school (Nambissan, 2000). And teacher prejudice towards weak learners has been shown to de-motivate students, who are often from marginalised communities (PROBE, 1999).

According to the ILO, India has the highest number of working children in the world – an estimated 29 million children between the ages of 5 and 14 go to work. Child labour is illegal in India for children under 14 years of age. Girls often work in informal sectors such as domestic work or as paid house helps, which are not counted in official statistics. Most of these children belong to the poorest, most marginalized communities, including Scheduled Castes and Scheduled Tribes.

One thought on “South Asia regional study: Dalit girls most excluded from primary education in India”