The just-released report, “Progress on Drinking Water and Sanitation – 2015 update and MDG assessment”, published by UNICEF and World Health Organization (WHO), has found that while India has made “moderate progress” in providing sanitation to its population, all of its bordering neighbours – China, Pakistan, Sri Lanka, Nepal and Bangladesh – have made “good progress.” An analysis of the data, which we reproduce in the form of graphs and illustrations based on the data provided by the UNICEF-WHO, suggest that India’s neighours met MGD sanitation targets. But, India failed to do it. Graphs have been culled out of the data provided by the report. Excerpts from the report:

The Millennium Development Goal (MDG) target called for halving the proportion of the population without sustainable access to basic sanitation between 1990 and 2015. During the MDG period, it is estimated that use of improved sanitation facilities rose from 54 per cent to 68 per cent globally. The global MDG target of 77 per cent has therefore been missed by nine percentage points and almost 700 million people. Despite encouraging progress on sanitation, much unfinished business remains from the MDG period. In addition to the shortfall against the global target, large disparities in access still exist. Almost all developed countries have achieved universal access, but sanitation coverage varies widely in developing countries. 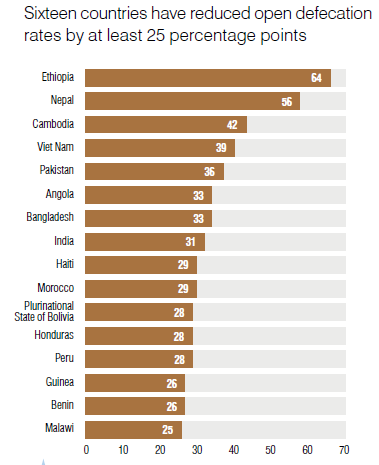 Since 1990 the number of countries with less than 50 per cent of the population using an improved sanitation facility has declined slightly, from 54 to 47, and countries with the lowest coverage are now concentrated in sub-Saharan Africa and Southern Asia. Nearly one third of the current global population has gained access to an improved sanitation facility since 1990, a total of 2.1 billion people.

In 2015 it is estimated that 2.4 billion people globally still use unimproved sanitation facilities. The vast majority live in just three regions, with 40 percent in Southern Asia. There are now twice as many people using unimproved sanitation facilities in sub-Saharan Africa than in Eastern Asia. The nearly 700 million people who would have been served if the MDG target for sanitation had been met is equal to the number of unserved people in sub-Saharan Africa.

Use of improved sanitation facilities increased in all regions, except for Oceania, but rates of progress varied widely. The Caucasus and Central Asia, Eastern Asia, Northern Africa and Western Asia were the only developing regions to meet the MDG target. Eastern Asia dramatically increased coverage – by 28 percentage points – to meet the target. South-eastern Asia also achieved a significant increase, of 24 per percentage points, but narrowly missed the target. While Southern Asia and sub-Saharan Africa had similarly low levels of coverage in 1990 (22 per cent and 24 per cent, respectively), the former increased coverage by 25 percentage points, while the latter only achieved a 6 per cent increase.

Despite progress made during the MDG period, sanitation coverage in rural areas continues to lag behind urban areas. Globally, seven out of ten people without improved sanitation, and nine out of ten people practicing open defecation, live in rural areas. The WHO/UNICEF Joint Monitoring Program (JMP) sanitation ladder differentiates between improved facilities and those of an otherwise improved type that are shared by more than one household. 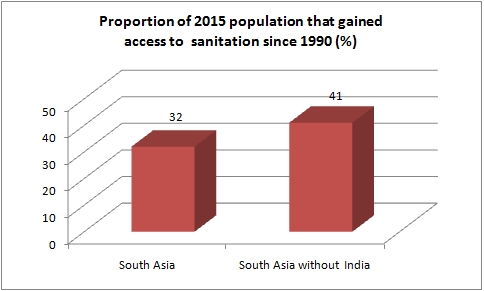 Limited data are available on sharing in many countries, but it is estimated that 638 million people worldwide are sharing sanitation facilities of an otherwise improved type in 2015. Use of shared sanitation is more common in some regions than others, most notably in sub-Saharan Africa and Southern Asia. More households use shared sanitation facilities in these two regions than in all other regions combined. Use of shared sanitation is widespread in both urban and rural areas. The total number of people sharing is greater in urban (398 million) than in rural settings (240 million).

However, among those who use sanitation facilities of an otherwise improved type, the proportion that share these facilities with others is similar in urban (11 per cent) and rural (12 per cent) areas. In some countries the proportion of people sharing is higher in urban areas (as in Ethiopia, Nigeria and Uganda), while in others the proportion is higher in rural areas (notably in West Africa). The nature of sharing can differ considerably, from sharing a facility with a small number of close neighbours to using facilities shared by many households.

In order to differentiate, some have recommended setting a threshold, such as five or more households, known as ‘limited sharing’, and to include the population served by limited sharing in the ‘improved’ category. Others argue that even limited sharing has negative impacts on health and should not be considered ‘improved’. Most countries still have very limited data on sharing of sanitation facilities (only 9 per cent have more than four surveys), even though the number of household surveys and censuses that collect information on sharing has increased substantially during the MDG period, from 239 in 2008 to over 400 in 2015.

For even fewer countries – only 85 in 2015 – is it possible to distinguish limited sharing from any sharing. During the MDG period, the elimination of open defecation has been increasingly recognized as a top priority for improving health, nutrition and productivity of developing country populations. In 1990, more than half the population in 16 countries practised open defecation, and more than ten percent in 62 countries.

The Southern Asia region, where the number of open defecators is highest, has also made significant improvements. Bangladesh, Nepal and Pakistan have all achieved reductions of more than 30 percentage points since 1990. The 31 per cent reduction in open defecation in India alone represents 394 million people, and significantly influences regional and global estimates.

Open defecation rates have been decreasing steadily since 1990, and it is estimated that fewer than one billion people (946 million) now practice open defecation worldwide. Two thirds live in Southern Asia, nearly three times as many as in sub-Saharan Africa. However, the number of people practicing open defecation in Southern Asia has declined only moderately, from 771 million in 1990 to 610 million in 2015, a reduction of just 21 per cent. During the same period the number of people practicing open defecation has actually increased in sub-Saharan Africa, and the region now accounts for a greater share of the global total than in 1990. All other regions recorded a reduction in open defecation in population terms between 1990 and 2015.