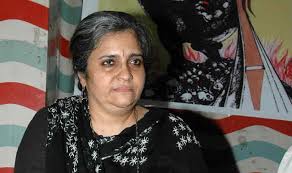 The recent CBI raid in Mumbai on the house and office of well-known human rights defender Teesta Setalvad has created a wave of angry protests among concerned citizens across India. Reproduced below are few of the statements issued by some of them:

Statement by the National Alliance of People’s Movements (NAPM), led by Medha Patkar:

National Alliance of People’s Movements (NAPM) is outraged at the repeated persecution of peace activists Teesta Setalvad and Javed Anand by the Government of India and Government of Gujarat, who, for more than two decades have been challenging the communal face of the State and its multiple fronts and in particular, after prolonged struggle, have been able to secure remarkable convictions against those involved in the inhuman Gujarat carnage in 2002. Their firm resolve to seek justice for the riot victims and stringent action against the culprits, despite the most severe odds has been acknowledged widely.

Their courageous work has won them many foes in the fundamentalist State-system, all of who are hell-bent to tarnish their image, weaken their morale, destroy the organizations they are associated with, implicate them in false cases, snatch their support-sources and deflect them from their spartan work, by entangling them in useless paper defence. Barely a few months after the Gujarat police landed at their doorsteps with arrest warrants, which could not be executed, only due to the Supreme Court’s intervention, turning down the need for “custodial interrogation” at that stage, the powers-that-be have now, through the Central Bureau of Investigation unleashed another round of vindictive raids at their office and residence. Notably, despite Teesta and Javed’s cooperation, Gujarat insisted on arresting them for interrogation in February last. Now, once again, ignoring their written assurances of full co-operation, CBI teams have conducted the sudden raids in a wholly unwarranted manner.

It is indeed a pity that acts of the premier investigative agency of this country, which is expected to be independent, are influenced in this way by the Government-in-power at the Centre. It is also a crass irony that law-abiding citizens in this country are tormented, even as all those who break the law, walk the corridors of power and abuse the process of law. It is no wonder that multi-million scamsters and perpetrators of gruesome mass murders as also those who loot and sell the natural resources of this country to profit-making corporates receive all the protection and privileges while those struggling to keep the Constitution alive are hounded by the State like witches.  It is no hidden secret that the Prime Minister of the country has a direct say in the handling the matters pertaining to the Gujarat’s riots and his role continues to be under the scanner. With the Naroda Patiya appeal-hearings underway and Zakia Jafri Criminal Revision petition slated for final hearings on the July 27, this action, just two weeks before that speaks a lot of the intent of the “investigators”.

In these trying times for democracy, NAPM joins hands with concerned citizens, civil liberties, human rights groups across the country and elsewhere in seeking an end to this oft-repeated saga of persecution of Teesta, Javed, Sabrang and CJP activists. If the lives of retired judges (such as Retd. Justice Jyotsna Yagnik) who directed convictions of culprits based on robust evidence is under threat, one shudders what would be fate of the activists!

It is high time that we all demand:-

(1) The Parliament of India to enact a comprehensive legislation protecting the human rights defenders and whistle blowers, who are always at the receiving end for seeking execution of constitutional rights and demanding accountability from the State.

(2) To keep CBI as an independent agency free from interference of all political powers.

We the undersigned express our profound dismay and disquiet at the continued official harassment by the central government of leading human rights defenders Teesta Setalvad and Jawed Anand. Since the installation of the BJP led government in Delhi in May 2014, the country has witnessed open strenuous official efforts to foist a large variety of charges of financial irregularity on them, to harass them, to tarnish their reputations, and to secure their arrests. Fortunately the interventions of the higher judiciary have protected them so far. However the latest raids by the Central Bureau of Investigation into their home and offices in Mumbai on 14 July 2015 are signs of continuing open misuse of official bodies to harass these human rights defenders.

It is well-known that Teesta Setalvad and Jawed Anand have fought an unrelenting battle not only to bring to book criminals who committed gruesome hate crimes against Muslims in the carnage of 2002, but also to expose the role of the Gujarat government in enabling, abetting and even organising these crimes. They have been fearless in charging the then Chief Minister Narendra Modi, who is currently the country’s Prime Minister, with direct criminal culpability for these crimes. For this they have assisted the widow of a former MP who was slaughtered in the carnage Zakia Jafri to fight a brave court battle in which the first accused is the then Chief Minister Narendra Modi. They are also appealing against court orders to free on bail prominent political leaders of the BJP convicted of the worst massacre in Naroda Patiya, Maya Kodnani and Babu Bajrangi.

What we are witnessing is crude and defiant misuse of official bodies to beat down these human rights defenders so as to silence their voices, break their morale and divert them from their unrelenting battles in defence of justice which charge the country’s current leadership with complicity in hate crimes.  The veracity of their charges will be decided in the country’s courts. But their right to fight for justice on behalf of the survivors of one of the most shameful communal carnages in the  history of free India is protected by India’s democracy. The open official bullying of courageous human rights defenders even as persons charged with a range of serious crimes walk free are brazen official attempts to diminish Indian democracy. These must be powerfully resisted by all democratic voices in the country.

The Narendra Modi led Union Government and the Indian State has declared war against Teesta Setalvad, Javed Anand and their organisations as they are fight to seek justice for the victims of Gujarat Carnage 2002. Inspite of all the means adopted by the Modi Government to sabotage the process of Justice, Mr. Narendra Modi even as Gujarat Chief Minister with a pliable bureaucracy at his disposal was unable to defend themselves legally and morally. In his new avatar now as the Prime Minister, the Modi Government and Indian state has declared their war against Justice. We, the concerned citizens and activists accept the challenge.

This Modi Government’s continuous harassment of Teesta Setalvad, Javed Anand and their organisations is de-facto war against Justice and also against all such organisations and activists who have taken up the struggle to defend the cause of Justice, Human Rights on various people’s issues.

We, the concerned citizens and activists stand by Teesta Setalvad, Javed Anand & their organisations and accept the challenges of Modi Government and Indian State and are determined to continue our protest in peaceful and democratic manner.

It is time for all movements, organisations and activists to give a united fight to this Modi Government and Indian State’s war against Justice. It is time to show our united strength against the fascist forces.

We,  the concerned citizens and activists resolve to continue our fight for Justice and Truth, to uphold the values of Human Rights, to stand up and speak-out for the oppressed against injustice of all kinds, unafraid of all consequences.