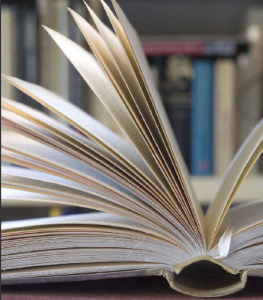 “The Value of Education”, a global consumer research study commissioned by HSBC, has claimed to explore parents’ hopes and expectations for their children’s education and beyond, with a focus on how parents can help children get what they need to achieve their life goals. The findings reveal that parents aspire to professional careers for their children, whether in traditional fields like medicine, engineering or law, or in newer sectors like business management or computer science. The  survey is based on responses received in March and April from 5,500 parents in 16 countries across the world. Excerpts:

Most parents want a happy life for their children. Almost two thirds (64%) around the world say that being happy in life is one of the three most important goals they would like their children to achieve as an adult. This goal is particularly important for parents in developed economies. In France, nearly nine in 10 (86%) parents say that being happy in life is the most important goal they have for their children, a desire shared by around three quarters of parents in Canada (78%), the UK (77%), Australia (77%) and the USA (72%). 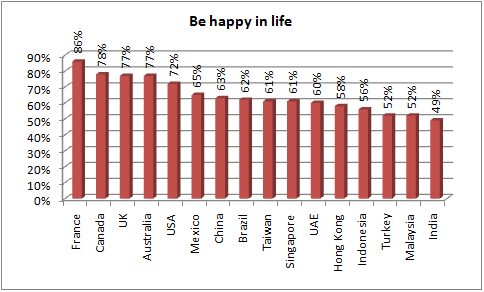 Physical well-being and financial security also figure highly in parents’ aspirations for their children. More than a third (35%) of parents around the world want their children to lead a healthy lifestyle and a similar proportion (34%) want them to earn enough to enjoy a comfortable life. In some places, health beats happiness. Almost three-quarters (72%) of parents in China and more than half in Turkey (55%) rate leading a healthy lifestyle as an important goal for their children – a higher proportion than being happy (63% and 52% respectively). 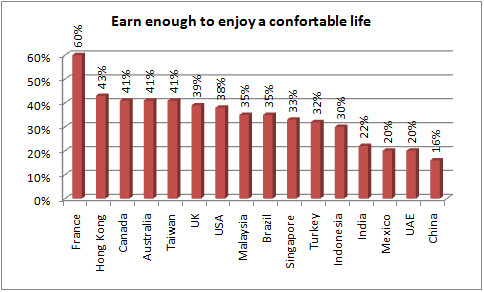 In contrast, just over one in 10 (13%) parents in Indonesia and one in five (21%) parents in France and Mexico say that leading a healthy lifestyle is a top goal for their children, a far lower proportion than say happiness (56%, 86% and 65% respectively).

Financial security rates highly in some parents’ hopes for their children. In France, three in five (60%) parents rank earning enough money to enjoy a comfortable life as an important goal, as do over two in five parents in Hong Kong (43%), Australia, Canada and Taiwan (all 41%). In contrast, far fewer parents in China (16%), Mexico (20%), the UAE (20%) and India (22%) say earning enough to live comfortably is a top three desire for their children. 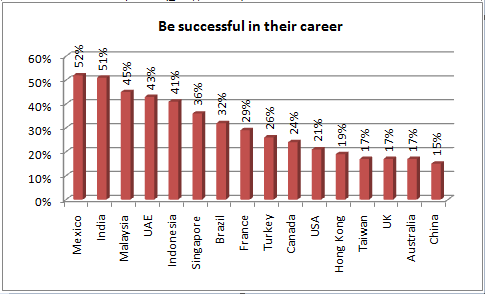 Other parents rank different goals more highly. Rather than being successful in their career, they are hoping for their children to fulfil their potential, to achieve the highest possible academic qualifications, or to make a difference to society. In many developed economies, parents prioritise their children fulfilling their potential over achieving career success. 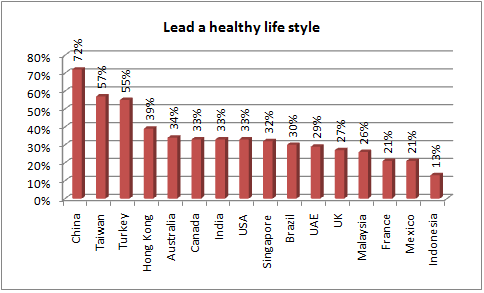 Half of UK parents (50%) and around two in five parents in Canada (45%), the USA (40%), Australia (40%) and Singapore (37%) say this is an important goal, one that is ranked higher than pure career success. The desire for children to achieve the highest possible academic qualifications is strongest in the UAE, where a third (33%) of parents say this is an important goal for their children, as it is for parents in Malaysia (29%) and India (28%). Making a difference to society is important to two in five (38%) parents in Indonesia and to just under a quarter (22%) of parents in Turkey and India. 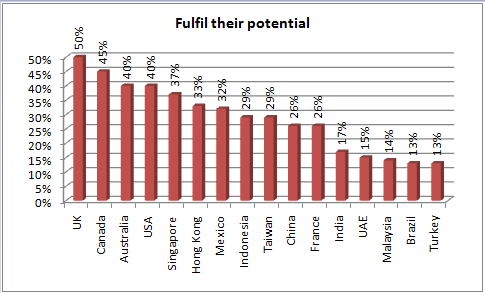 When it comes to the occupations that parents would most like their children to go into, more than four in five (83%) have a specific type of job in mind. In emerging economies, this proportion is even higher, with more than nine in 10 parents in Indonesia (97%), Mexico (95%), China (94%) and Malaysia (92%) having a specific occupation in mind for their children. Parents in developed economies are less focused on this. Fewer than two thirds (62%) of parents in Australia and fewer than three quarters (72%) in the UK and Canada have a specific job in mind for their children. 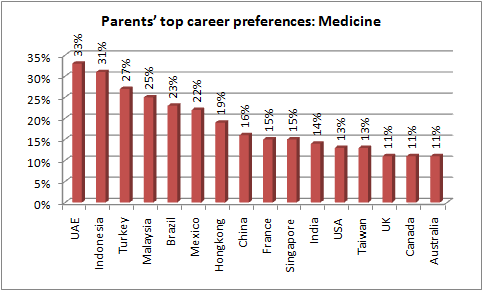 This is also the case for Taiwan (72%). Parents’ career preferences for their children are based on several factors. More than a third (35%) say that income-earning potential is a key consideration. A similar proportion think that the job’s benefit to society (35%) and how well-suited it is to their child’s individual strengths (34%) are important. Income-earning potential exerts a much stronger influence on parents’ job preferences for their children in certain countries. 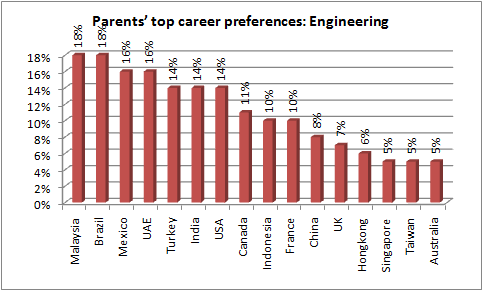 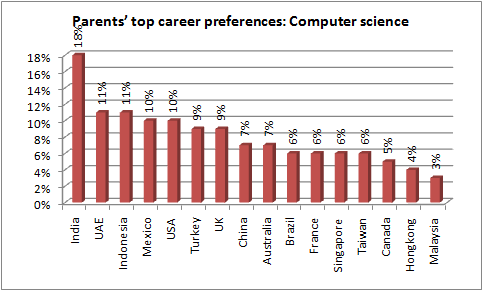 Parents in developed economies are more likely to take into account their child’s individual strengths when considering a desired occupation. Over half of parents in Australia (55%) and more than two in five in the USA (45%) and Canada (44%) think about how well an occupation suits their child’s personal strengths. However, only around a quarter of parents in Brazil (25%), Malaysia (25%) and Taiwan (24%), and an even smaller proportion in Hong Kong (14%), say this is a consideration in their career preferences for their child.

Professional, science-based careers – which traditionally combine good income-earning potential with a high level of job security – take the top spots in parents’ preferences for their child. Medicine is the most favoured occupation, with around a fifth (19%) of parents preferring it. Engineering (11% of parents) and computer science (8%) are also popular. Around three in 10 parents in the UAE (33%), Indonesia (31%) and Turkey (27%) say they would most like their children to get a job in medicine.

This compares to just over one in 10 (11%) in Australia, Canada and the UK, where parents are more concerned with their children finding a job that suits their individual strengths. A job in engineering is the most preferable for almost a fifth of parents in Brazil (18%), Malaysia (18%), the UAE (16%) and Mexico (16%), compared to just 5% of parents in Australia, Singapore and Taiwan. Parents in India – a country renowned for its emerging technology sector – are more than twice as likely as the average to want their children to go into a job in computer science.

Nearly one in five (18%) see this as the preferred career for their child, compared to just 8% across the world. There is also a distinct gender gap when it comes to career preferences. Parents are more likely to want their daughters to go into medicine (22%) than they are for their sons (15%). They are, however, more likely to want their sons to go into engineering (15%, compared to 6% for daughters) or computer science (10%, compared to 5% for daughters). This is true regardless of parents’ own gender.