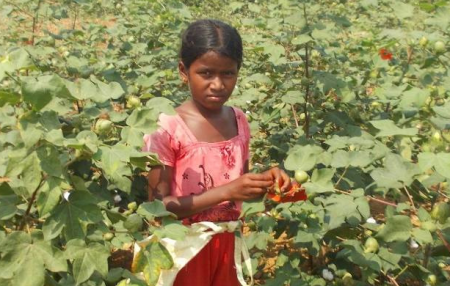 A recent study, “Cotton’s Forgotten Children”*, by Dr Davuluri Venkateswarlu, director, Glocal Research, a Hyderabad-based multi-disciplinary reseach and consultancy service, has found large-scale incidence of child labour in cotton producing fields of India. Based on field survey between July 2014 and January 2015, the study analyses primary data collected through field visits to 396 sample cottonseed farms in 72 villages that produce seed for both MNCs and major Indian seed companies. Out of 396 farms surveyed, 60 are in Andhra Pradesh, 56 are in Telangana, 100 in Gujarat and 60 each in Rajasthan, Tamil Nadu and Karnataka. The study has been coordinated by the The India Committee of the Netherlands, an active member the Stop Child Labour campaign, the Clean Clothes Campaign, the International Dalit Solidarity Network and the Dutch MVO Platform. Excerpts:

Children under 14 years still account for nearly 25% of the total workforce in cottonseed farms in India. In 2014-15, a total of around 200,000 children below 14 years were employed in cottonseed farms in Andhra Pradesh, Telangana, Gujarat, Tamil Nadu, Karnataka and Rajashtan states. Gujarat, which has the largest cottonseed production area in the country accounts for nearly 55% of the total children employed in this sector (110,000).

The persistence child labour on a large scale is due to the limited coverage and insufficient impact of the present interventions. This is even more the case for adolescent children. There are now 281,200 children between 15 and 18 years working in the cottonseed fields while this number was 190,450 in 2006-07. This is an increase by almost half.

The field survey for covered a sample of 396 cottonseed farms in 72 villages that are producing seed for both MNCs and major Indian seed companies in the six Indian states namely Andhra Pradesh, Telangana, Tamil Nadu, Rajasthan, Karnataka and Gujarat which account for nearly 95% of the total cottonseed production in India.

Recent figures regarding the magnitude of child labour, measured in terms of proportion of children to the total workforce and the average number of children employed per acre, in hybrid cottonseed production in India show a declining trend in all the states. The decline is significant in Andhra Pradesh, Tamil Nadu and Karnataka.

However, this has not translated into a decline of the total number of children employed on cottonseed farms, particularly in Gujarat. The latter is due to a substantial increase in the production area in these states.

As a result of the efforts of local and international NGOs, the government, media and social investors, awareness has been created. Interventions by various agencies, including governmental agencies, the National Commission for Protection of Child Rights, NGOs like MV Foundation and a union like DRMU, the seed industry and international organisations like ILO, UNICEF and UNDP have in combination had a positive impact and helped to reduce child labour in the cottonseed industry.

Despite the decline, the total number of children still employed in the cottonseed sector is huge. The conditions in the fields continue to be very unsafe and exploitative for the children. The children are made to work long hours and are paid less than market and official minimum wages. They are also exposed to poisonous pesticides used in high quantities in cottonseed cultivation and are often trafficked as migrants from other places. The existing employment practices in cottonseed farms result in the denial of rights of children and violate many national laws and international conventions. 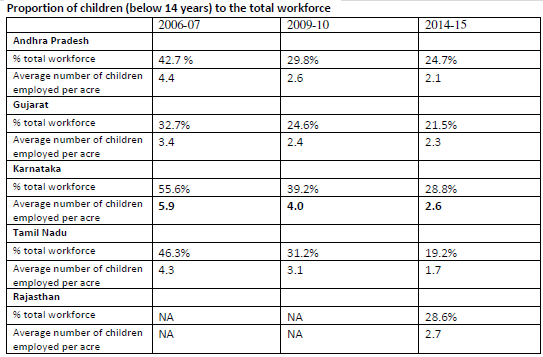 The response of some of the state governments to address the problem of child labour in this sector has not been very encouraging. The government of Gujarat and Rajasthan, except initiating a few steps to control the trafficking of children from Rajasthan to Gujarat cottonseed fields, have not paid serious attention to tackle the issue.

They are in a ‘denying mood’ about the existence of large number child labourers in this sector. In fact the employment of children on family farms, which has increased recently, has not received any serious attention from the state governments of Gujarat and Rajasthan.

There is a misconception, which is propagated by government and some seed companies, that most of the working children in seed production are family labourers who help their parents during school holidays and before and after school hours. This is not correct.

Most of the children found working on seed farms were school drop-outs who are now working as a full time workers. They accounted for nearly 62% of the total working children in Andhra Pradesh and Karnataka. In other states the proportion of school drop-out children varied between 55% and 58%.

The response from the seed industry as a whole to address the problem of child labour is minimal. Despite acknowledging the problem and promising steps to address the problem of child labour, seed companies, except for a few multinationals and local companies, to date have not taken any serious efforts to tackle the issue on the farms that are producing seed for their companies. The initiatives undertaken by Bayer, Monsanto, Du Pont and few local companies have had some positive impact in reducing the number of working children.

However, their efforts have only a limited impact on the overall magnitude of child labour in the industry. Unless all the major seed companies come forward and implement serious measures in collaboration with other stakeholders, it is difficult to combat the overall problem of child labour.

The minimum wages issue has not received as much attention as child labour and no serious efforts were made to tackle this issue either by the government, the seed industry or by civil society organizations, except the work by the union DRMU in Gujarat.

There is lack of awareness about the Minimum Wage Act among workers and farmers. The workers in cotton seed production are not well organized and there are no active worker organizations operating in most of the areas.
—
*Click HERE to to go to the link for downloading full report