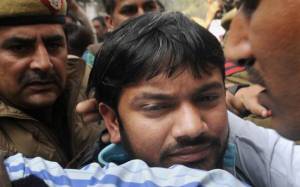 About 75 prominent academics, social activists and journalists from Gujarat have sent a memorandum* to the President of India, expressing deep concern over the incidents in Delhi following the arrest of JNU student leader Kanhaiya Kumar. Text:

We the citizens of Gujarat would like to share our deep concern about the series of happenings from 9th of February to 18th of February.

While dissociating ourselves from anti India pro Pakistan slogans in JNU campus, we are horrified to watch the unprecedented authoritarian arm twisting punitive measures like witch hunt in the campus and slapping Sedition Charge on President of JNU Students Union, Mr. Kanhaiya Kumar by the BJP led NDA Govt at Centre as per the direction of Home Minister Mr. Rajnath Singh and Human resources Minister Smt. Smriti Irani.

The police interference in JNU Campus, slapping the Sedition Charge on the President of JNU students Union Mr. Kanhaiya is condemnable.

The chain of incidents of hooliganism, like repeated attack on Kanhaiya Kumar in Patiala house court, attack on teachers and students, journalists, hooting the Supreme Court appointed five members panel as anti-National by the forces in the presence of police appeared to be backed by the ruling party BJP and its’ outfits expose the absence of safety of the citizens even in the court premises. This open terrorizing tactics has been prompted by the Govt. in power, police and hoodlums to send a loud message to scuttle the freedom of expression endanger democracy and democratic institutions in our country.

Defying the Supreme Court’s order tantamounting to contempt, the repeated attacks on Kanhaiya Kumar and journalists is nothing but the fascist onslaught to muzzle the voices of dissent.   Casting anyone anti- BJP as  anti-government as anti-national and anyone pro-BJP as patriots is to say the least , quite ridiculous.

The attackers like BJP MLA OP Sharma, numbers of so- called black coat worn advocates like Mr.Vikram  Chuahan are moving freely and side by side the lies are fabricated to mislead the people in the name of Nationalism and patriotism.

There are worldwide condemnation including in our country against of arrests, sedition charge, attacks on journalists, academician  but all these  have  no effect on the attitude of the Govt. and the authority.

We  the citizens endorse the voices raised by concerned citizens across the country and world.

Under this circumstances we would like to reiterate that Universities are the space for open debates and polemics and we request your intervention to save the democracy, autonomy of the universities, safeguard the freedom of expression and provide security to all citizens.

*Prepared by Prakash N Shah, Gautam Thaker, and Dwarika Nath Rath. Those willing to endorse the memorandum can email to dn.rath@gmail.com

One thought on “Attacks on Kanhaiya Kumar, journalists is nothing but fascist onslaught to muzzle voices of dissent”