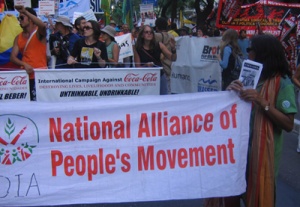 The National Alliance of People’s Movements (NAPM), in a letter ot Union finance minister Arun Jaitley, has put forward demands from farmers and other marginalized sections of the society. Text of the letter:

In recent times, announcement of the Union budget seems to be becoming a futile exercise, even with all the publicity and hype associated with it. We say so, since the annual Union Budget has no more remained a final exercise of allocation of resources for various sectors and schemes, reflecting priorities of the debates that may occur at the Legislature. The party which has majority at the Parliamentary forum pushes its agenda when more than 121 Crores citizens remain on the periphery with neither any space nor a channel for participating in the Budget making process.

The pre-Budget consultations that we have been part of organised by the Finance ministry during the UPA Government was more a dialogue in democratic decency than with due primacy granted to the People’s organisations and non-electoral representatives and their views. In the present case, current Government is all out for impingement on the spaces of the Civil society and of the movements critical of its corporate policies, there has been no scope provided for the organisations of Farmers, Labourers, Dalits and Adivasis who could press for their demands at the right point of time.

We have completed more than two decades of the declared Economic Reforms in country. Even though there is growing unemployment, declining agricultural and industrial production, rising inflation, a sense of economic crisis and inequality as never before, even then there is a sense of celebration amongst a minority. That minority is celebrating and playing the fact that India can achieve a double digit economic growth. The obsession with the economic growth has taken over every other social concern and concerns about a declining developmental state. In past twenty years, if a tiny minority has seen an explosion of choices of luxury and consumer goods then there is a vast majority, nearly 80% of the population liveing on less than 20 Rs a day.

In this situation too we, the common people, cannot keep quiet but raise questions but with our analyses and expectations, critiques and concerns. Our priority sectors being those which are of various marginalised and impoverished sections of the society. We present here the first critical set of figures showing how the budget allocation in the most critical sectors that are generally seen as deprived of funds, remain unutilised.

The budget analysis of last financial year that was characteristic of Narendra Modi’s leadership with a neo-liberal team with you at the helm of affairs has resulted in 5,51,532 Crores worth allocation of the marginalised section remaining unutilised when hundreds of Farmers committed suicide in the country. The heavily under-utilised budget components therein are indeed the ones which could make a difference for certain crisis towards part resolution of certain crisis faced by the farmers to the displaced persons. Few examples are as follows:-

Will the upcoming budget with its execution be any different?

We demand that the budget must reflect the manifest support to the farmers that every party and politician is avowing by steep rise in the MSP for all non-cash and cash crops, including hilly millets and horticultural crops. MSP should not be less than twice the input expenses on the same.

Let the insurance to all categories of farmers and labourers be included in the planned sector claiming a substantial part of the allocation of state schemes instead of leaving to the corporate business. The unorganised sectors are awaiting their due on various social and economic security plans which is unavoidable if the Unorganised Sector Workers Act, 2008 is being implemented.

The sector of education remains deprived with decisions such as cancellation of non-NET scholarships as well as lack of funds for various categories of public schools of regional languages. The privatisation and commercialisation of education and the unrest among the students is the ultimate results that needs to be dealt with. The state must take over measure responsibility towards equitable policies with no concessions for the highly commercial private universities and international schools.

There should be no fund allocation for so called development projects such as Sardar Sarovar in Narmada Valley, Karchana and other thermal power plants in UP and MP, the nuclear power projects such as Jaitapur, Mithi Vardi and Chutka, economic and social security pensions, where there is conflict with the affected population and hence pushing and promoting those would be throwing fuel in fire. And more funds be allocated where there are none for the complete R&R of the many project affected families.

PDS as universal scheme and MGREGA should receive the highest priority with no cuts and additions.

The real makers in India, in the village and the small industries sector, various non-consumerist various social services, the farm labourers and the fish workers must be ensured not minimum but optimum wages and support to labour intensive technologies through substantial increase in allocations and concessions instead of unjustifiable tax excise and custom duty concessions to the heavy corporates and consumer industries such as gold and jewellery.

The housing and infrastructure for the urban poor and not the smart cities and elitist infrastructure should get the larger chunk for urban development if it is to be just and sustainable.

We, the People’s Movements and Organisations will definitely assess the Modi Government and its counterparts in States on the above criteria and response to the demands and not through the speeches and mass meetings wearing Safas like farmers and taking the broom of Valmiki community during inaugural of Swachh Bharat Abhiyan. Large sections of our population demands truly basic economic and social security and not just the highly publicised corporate schemes.