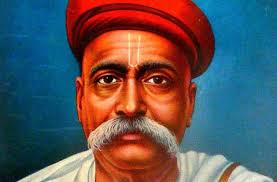 The one story of Bal Gangadhar Tilak that almost every Maharashtrian would know since it’s in the state syllabus, is how Tilak, during his school years, famously refused to pick up groundnut shells lying on the floor after being asked by the teacher to do so, on the grounds that “I didn’t throw them so I won’t pick up the shells”. Sadly, he did litter around enough shells for the future generations, and we don’t have that luxury to refuse to pick them up.

It’s particularly important given how Tilak is being protected, censored, bonsai’ed, and decorated to appeal to the generation of today, as can be seen from Bipan Chandra’s treatment of Tilak in his books that are unofficially considered to be textbooks for civil services and state services exams, and even in a recent Marathi movie on Tilak that also chose to clip out significant portions of history in pursuit of propaganda.

In Tilak’s time you could see that the entire cadre of social reformers opposing the caste system and fighting for emancipation of women were seen as anti-nationals or traitors for not focusing on the British. Today, there are no British in India, but the evils of our rigid social structures still persist. And if even today you insist on neglecting the social harm done by Tilak and his think-alikes now found in the Sangh and elsewhere, then I’m sorry, we will not oblige.

Following is only a compilation of his own words taken from his “patriotic” newspapers ‘Mahratta’ and ‘Kesari’, his books, and speeches:

“Do you seriously hope, are you really in earnest that our women will do anything in the direction of original literature for centuries to come? …. I know of very few female names who have added perceptibly to the stock of human knowledge or have modified by their brain production the current of human thought.”

And when the reformers argued that women can indeed make an independent contribution to literature:

“Such dreams and visions as these be true or end in idle smoke, human nature remains unchanged … there is no purer, deeper joy than that of a mother over her first born child; no intensity of grief more bitter than her sorrow at its loss. As a girl of seven she hugged her baby doll however battered, old and ugly; as woman of twenty she clings to her newborn son …. As to the women of future, they must grow out of the women of the present …. Now is this not we ask, exactly what we have been contending for …. Our shastras and customs require a girl to qualify herself for a married life and if our schools cannot give them necessary training they are worse than useless.”

“What is urgently wanted is primary schools for girls that would give them such knowledge as is useful in domestic life … teaching English would prove to turn out girls to be a dead weight on their husbands.”

“Besides, history shows, that the social need not necessarily precede the political- it was not with the help of girls who went to school and studied till class four, that Shivaji established Maratha Rajya and the Peshwas hoisted the saffron flag.”

Amidst the marital rape controversy we face today, we can revisit its source in Tilak’s ideology:

“The discipline of the Hindu religion is so strict that even under cruel treatment wives pull on with their husbands, simply because they consider that it is their duty to do so. In place of this noble sentiment our reformers would like to substitute the idea of a commercial bargain, both parties living together for mutual profit and dissolving partnership as soon as either of them feels disinclined to continue..”

“The very first question that strikes us at the very onset of our inquiry is, what is the aim of the course of instruction? If the object be to change the state of the Hindu household after the English model by the instruction given to our girls, we have nothing more to say; for we would condemn it most strongly as being dangerous and at the same time an almost impossible feat. If, however, the object be to fit in the education of females with the existing state and constitution of the Hindu community and Hindu household, to make our females useful helpmates of their husbands and not merely ornamental figureheads, then we dare say the present course of studies in the female high school is not much calculated to further that object. The object of the Board is not to educate the girls attending their school so as to be good clerks, good schoolmistresses or good English or Marathi

“Holding as we do, the opinion that men and women have different spheres of activity allotted to them in domestic economy, …. There is one feature of this curriculum, which strikes us very forcibly; religious and moral instructions, as can be conveyed by lessons inculcating high principles of ancient Aryan religious morality finds a place nowhere in the list of subjects taught…. In other words, there is nothing that can constantly show the girls that there are high and more honourable duties allotted to them in this world.”

A girl preparing her lessons till 10 AM and remaining at school till 5 PM becomes a regular boy student and is quite likely to forget that their are other duties incumbent on her …. Features above pointed out, are likely enough to develop in girls vain tastes and make them feel a sense of superiority to their partners.”

“The object of female education is not to make the women equal of man… it must also be remembered that women having to perform the wifely and maternal duties require a fund of energy to perform them satisfactorily. Their energies in other directions must be spent very sparingly indeed and therefore their education should be so planned as to give to their minds a minimum amount of useful culture and information with minimum expenditure of energy.”

“We must contemplate the average Hindu girl as a daughter-in-law having special duties in that relation towards the inmates of her husband’s household. She must be considered in this special relation. A Hindu girl must grow to be a good daughter-in-law in addition to her being a good wife and a good mother and so forth. We are of opinion that the extra Home jurisdiction is peculiarly the duty and privilege of the strong sex … A Hindu woman’s social usefulness will depend on her sympathy with and grasp of our traditional literature … Puranic and other religious literature … That the light of education must be so manipulated as to make the domain of women a blessed place … girls should be provided with a fair knowledge of hygiene, domestic economy, child nursing, cooking, sewing and so forth.”

Opposing the Age of Consent Bill that sought to increase the age of consent from 10 to 12, on the grounds that it was against the Shastras that say consummation of marriage is okay as soon as a girl attains puberty:

“Thus both the written and the unwritten law enjoin consummation of marriage on the first attainment of puberty and the Bill if passed into law, will interfere with the religious custom, at least in 6 cases out of 126, according to the statistics given by the Honourable mover of the Bill himself… In the present instance, the proper period of consummation of marriage is clearly laid down in the Shastras and when this is followed in daily practice, the bill cannot but interfere with it.”

It is an upper caste liberal fad to mock the “mulniwasi” idea and to constantly ask the dalit-bahujans what they think of it; but they seem to forget that this idea is a mere inversion of Tilak’s own Aryan supremacy idea. Below, you can see that Tilak was claiming Aryan supremacy while Hitler was not even 5 years old (that upper castes came from Arctic region and are a higher race meant to dominate, and that Rig Vedas were first written in the Arctic region, etc). The book from which these excerpts are taken is still in print and readily available in major bookstores of Pune.

“There are many passages in the Rig-Veda, which, though hitherto looked upon as obscure and unintelligible, do, when interpreted in the light of recent scientific researches, plainly disclose the polar attribute of the Vedic deities, or the traces of an ancient arctic calendar…

“The very fact that after compulsory dispersion from their mother-land, the surviving Aryans, despite the fragmentary civilisation they carried with them,were able to establish their supremacy over the races they came across in their migrations from the original home at the beginning of the post-Glacial period, and that they succeeded by conquest of assimilation, or by Aryanising the latter in language, thought and religion under circumstances which could not be expected to be favourable to them, is enough to prove that the original Aryan must have been of a type far higher than that of the non-Aryan races,or than the one found among the Aryan races that migrated southward after the destruction of their home by the Ice Age.”

Opposing education for Shudras and Ati-shudras

Opposing education for the shudras and ati-shudras, in a textbook defence of the caste system that would have made Manu proud:

“You take away a farmer’s boy from the plough, the blacksmith’s boy from the bellows and the cobbler’s boy from his awl with the object of giving him liberal education … and the boy learns to condemn the profession of his father, not to speak of the loss to which the latter is put by being deprived of the son’s assistance at the old trade.”

“With a view of securing a larger attendance of kunbi children in the schools the government has lately placed the primary schools under the control of revenue officers…. (who) are required to induce cultivators and others to send their children to schools but no one has paused to inquire what ultimate good is to be derived by this forcing process, and whether more harm than good is not likely to result from it.”

“Nobody can be ignorant of the fact that it is the fair sex (men) that has to play a prominent and a difficult part in the work of increasing the human species. The method in which our delicate sex (Women) is to be moulded is far from being productive of immense good…. When I learnt that the girls were to be taught in English, that the softer sex was on the eve of receiving higher education to study the alphabet of that language which has, no doubt done so incalculable good to India by opening the vast reservoir of western knowledge, but which has also impaired the health of many youths.”

Criticising Jotiba Phule, complaining that his reform activities are destroying the feeling of “reverence” that people have for Brahmins:

“Their work is that of destruction, their first and foremost attempt was to dispel through the land any reverence that might be felt for the Brahmins: their next sally was against the time honoured institutions, customs and manners of the Brahmins and the Hindus generally. The late R.B. Deshmukh and the late Jotirao Fulley may be cited instances of such reformers.”

In education “much of the instruction should consist of dogma pure and simple.”

3 thoughts on “Bal Gangadhar Tilak: Teaching English would prove to turn out girls to be a dead weight on their husbands”