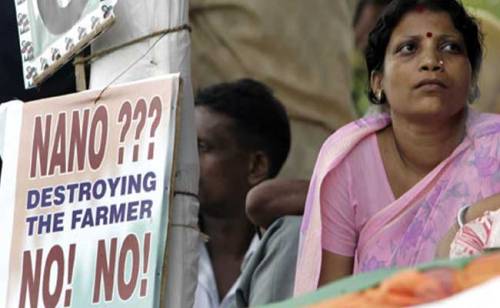 The National Alliance of People’s Movements (NAPM) statement, welcoming the Supreme Court decision quashing the forcible land acquisition of 1,000 acres by the West Bengal government in 2006 for the Tata car factory:

The decision by Justices V. Gopala Gowda and Arun Mishra that the land be returned to the original land owners of Singur, marks another chapter in the long history of resistances by the people’s movements against forcible land acquisition in name of public purpose for private corporations. Singur marked a turning point in 2006 when the resistance against the Special Economic Zones were just gathering steam and it emboldened our collective struggles all around.

We congratulate farmers of Singur who fought the ten years long legal battle and kept the pressure for return of the land with the help of the Trinamool Congress led West Bengal government. We also welcome the fact that the farmers don’t have to return the money and Jutsice Gowda’s observation that the land acquisition for a private company to build a car plant doesn’t constitute ’public purpose’. This is in line with what we have been saying for long and only vindicates our position.

Since the enactment of the new land law in 2013, the governments have been bypassing the law to acquire land for private corporations and not adhering to the consent clause and need for conducting social impact assessment and limiting it only to cash compensation. The NDA government even thrice brought Ordinances to amend the law to facilitate easy acquisition of the land for private corporations and for profiteering in the name of the public purpose. Supreme Court’s judgement today is again a vindication and reaffirmation of the positions we have taken, where anything and everything has been justified in the name of public purpose.

Any forcible land acquisition for corporate profit in the name of public purpose and development of nation is not acceptable and is completely anti farmer and anti people and unconstitutional, as reiterated by Supreme Court judgement today.

A number of people’s movements have joined hands with the mass organisations of the Left parties on the need for protecting land rights and oppose forcible land acquisition across the country. This unity has led to defeat of the NDA government’s design amend the 2013 land law and extend support and solidarity to community organisations opposing forcible land acquisition. With the West Bengal government backing Singur farmers, and Left parties also standing with people’s movements, we do hope that a collective consensus will emerge from West Bengal on a people-centric development agenda and industrialisation, where interests of the workers, peasants and farmers will be at the centre of it and not profit and corporate greed.

We once again congratulate the farmers of the Singur for their valiant struggle!