Crimes such as thefts, robberies and burglaries have been widespread at the Vatwa resettlement sites, a group of seven public housing sites where thousands of households displaced by various urban development projects have been resettled since 2010. These sites comprise of 9,200 flats, which is almost half of the total housing built by Ahmedabad Municipal Corporation (AMC) under Basic Services to the Urban Poor (BSUP), a programme of the Government of India’s Jawaharlal Nehru National Urban Renewal Mission (JnNURM) (see Map 1).

By 2014, over 4,000 households were living at three of Vatwa’s BSUP sites. During the 2-4 years that they have lived here, thefts of private property and common property have been widespread in public spaces. Petrol from bikes, tyres of rickshaws and bikes, and cycles have been stolen. Lids of overhead water tanks, pipes covering electric wires, and water pipes have been stolen from buildings. Many residents have been robbed while moving in and around the sites. This has included robbing at knife-point. Many house burglaries have taken place and cash, jewelry, mobile phones and other items have been stolen. Residents try not to leave their house unoccupied for long and avoid going out alone after dark, fearing robbery.

This policy brief traces the linkages of thefts, robberies and burglaries to four dimensions of urban planning and governance. “Poverty, Inequality and Violence in Indian Cities: Towards Inclusive Policies and Planning,” a three-year research project (2013-16) undertaken by Centre for Urban Equity (CUE), CEPT University in Ahmedabad and Guwahati, and Institute for Human Development in Delhi and Patna, is funded by the International Development Research Centre (IDRC), Canada and Department of International Development (DFID), UK, under the global programme Safe and Inclusive Cities (SAIC). The research analyzes the pathways through which exclusionary urban planning and governance leads to different types of violence on the poor and by the poor in Indian cities.

In Ahmedabad, the largest city of Gujarat state, the research focuses on two poor localities: Bombay Hotel, an informal commercial subdivision located on the city’s southern periphery and inhabited by Muslims, and the public housing sites at Vatwa on the city’s south-eastern periphery used for resettling slum dwellers displaced by urban projects.

Three FGD participants were victims of house burglaries and one participant knew someone whose house was burgled. One participant’s family had lost two cycles to theft. Cash was repeatedly stolen by two 14-15 year old boys from the cash-box of an interviewee’s tempo. One interviewee’s gas cylinder was stolen from outside her shop.

Men who had been resettled from Banasnagar (Dani Limda) and many riverfront localities explained that at their previous location they could safely step out alone even in the middle of the night whereas they do not do this here. While some residents feel that such incidents have decreased as the area has become more populated, many incidents continue to take place. What are the planning and governance related reasons for this? 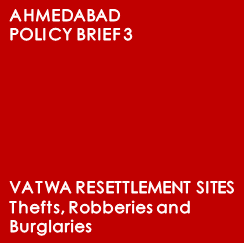 The approach to resettlement has resulted in constrained mobility and stressed livelihoods for a vast majority, leading to increased socio-economic vulnerabilities (see Box 1). This has pushed some residents to resort to theft, robbery and burglary.

Due to constrained mobility, many young men hang about the locality idly and they develop gambling and drug habits, often resorting to theft, robbery or burglary to finance these habits. Stressed livelihoods have also led to negative impacts on the environment at home. Where both parents are struggling to earn a living, they are unable to give adequate attention to their children who stray into these habits.

“When there are no jobs, the youngsters get spoilt. They get into wrong activities. They do not have money for the transport fare… when a person goes hungry then he will steal, he will get into bad businesses.”

The nature of work available nearby (industrial) is of a different type than what many of the displaced have done their entire lives (vending, domestic work, casual labour in construction or trade activities, etc) and also pays less for longer hours of labour. Nearby domestic work also pays less. 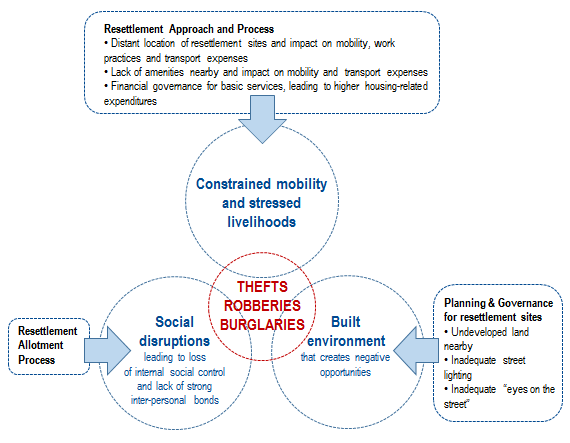 Inadequate infrastructure and services in and around the resettlement sites creates negative opportunities. The absence of adequate street lighting gives an impetus to thefts and robberies in public spaces. Residents identified the main cross-road and road between VGG Nagar and Sadbhavna Nagar as lacking good street-lighting, making robberies rampant. Inside the sites, absence of street lights in many common plots and irregularly functioning street lights in the internal lanes creates fears of robbery.

The main cross-road and road have scattered vendor-stalls and hence lack “eyes on the street,” creating opportunities for robberies. There is a flyover at one end of this road where vendors have congregated and women, referring to it as bazaar, identified it as being a safer area. The cross-road referred to above also has vacant plots that further give a sense of insecurity. In essence, lack of street lights, activities and development on the main roads enhance the feeling of insecurity and possibility of theft.

The non-functional common lights in the building corridors provide opportunities for thefts and burglaries. These lights are not working in most buildings since the common electricity bills have not been paid due to both stressed livelihoods and social disruptions (See Policy Brief 2).

Profound social disruptions have occurred at the community level as a result of the resettlement allotment process (Box 2). This has led to a loss of moral authority that local leaders, elders and residents in general were able to exercise in many of the previous localities. This has led to a loss of internal informal social control, creating a mahol or environment in which youth in particular stray towards theft, gambling and drugs more easily.

One dimension of the problematic resettlement process implemented by AMC and the Sabarmati Riverfront Development Corporation Limited was that several riverfront neighbourhoods were grouped together and assigned a number of resettlement sites, following which a computerized allotment process was carried out which randomly allotted a flat to each displaced household in this large group in any building at any of these sites. Resettlement from each neighbourhood was also done in phases (since court rulings extended eligibility, i.e., the cut-off date, during the resettlement process), with different sites assigned to the same neighbourhood in different phases.

In the case of road-widening for BRTS, AMC sent residents from six affected neighbourhoods between Ambedkar Bridge and Shah Alam Toll Naka to a transit camp on the city’s periphery. 3-4 years later, treating them as a single group, they were allotted flats in two groups of buildings at two different sites in Vatwa through computerized allotment. AMC did the same to residents from two BRTS-affected neighbourhoods at Kankaria Lake.

This allotment process separated people from their extended family, neighbours and others they had developed relations with. It also brought people from different neighbourhoods together at the same site and in the same buildings.

People find it difficult to overcome these disruptions because of caste differences, livelihood struggles that leave little time and energy for getting to know new people, and high turnover of residents (many allottees have rented out their flats and returned to live in central city areas, flats left unallotted by AMC have been captured by middlemen and rented out, leading to the high turnover of tenants).

Failure of the police to protect people and property is a contributor to thefts, robberies and burglaries. In mid-2014, a police chowky (outpost) was built at one corner of the cross-road between VGG Nagar and Sadbhavna Nagar. Before this, the police sometimes erected a makeshift chowky at Sadbhavna Nagar or did patrolling for a few days when a violent incident occurred here. For many months, the new chowky did not remain open 24-hours. Moreover, the police did not follow through on reported incidents, even when the culprit was caught. For example, residents caught a man who was trying to steal water pipes from a vacant building and handed him over to the police who released him after a few days. Residents also felt that there was police corruption. One interviewee who had lost cash in a burglary pointed out that if Rs.50,000 is stolen then one has to spend Rs.5,000 just to file a case, and even after payment there is no guarantee that the money will be recovered. The feeling that the police do not do anything to curb such crimes often results in residents taking it upon themselves to punish thieves by beating them mercilessly.

Stressed livelihoods and social disruptions due to the resettlement approach and process have also created a situation where it is hugely challenging to establish any kind of legitimate and effective formal governance structure (such as resident associations) which could play a role in fostering a more secure environment in and around the resettlement sites.

*This is the third Policy Brief in the series prepared by the research team of the Centre for Urban Equity (CUE), CEPT University, Ahmedabad, on “Safe and Inclusive Cities – Poverty, Inequity and Violence in Indian Cities: Towards Inclusive Policies and Planning”.

One thought on “Planning and governance related reasons for thefts, robberies at Ahmedabad resettlement sites” 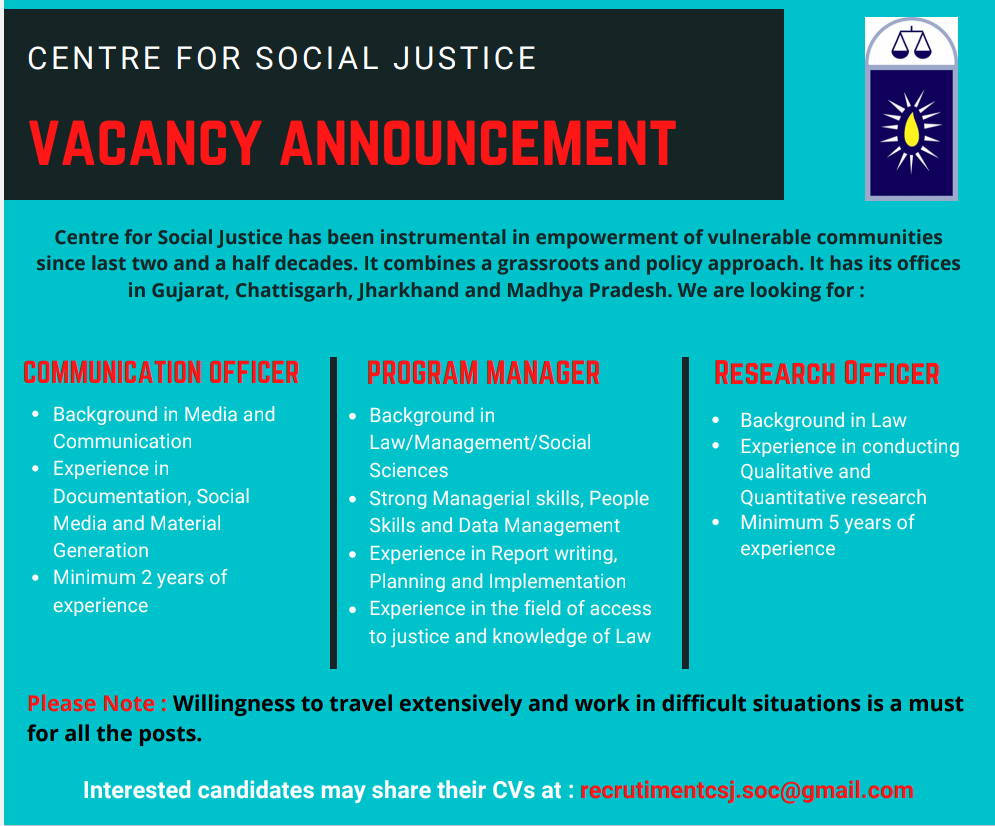