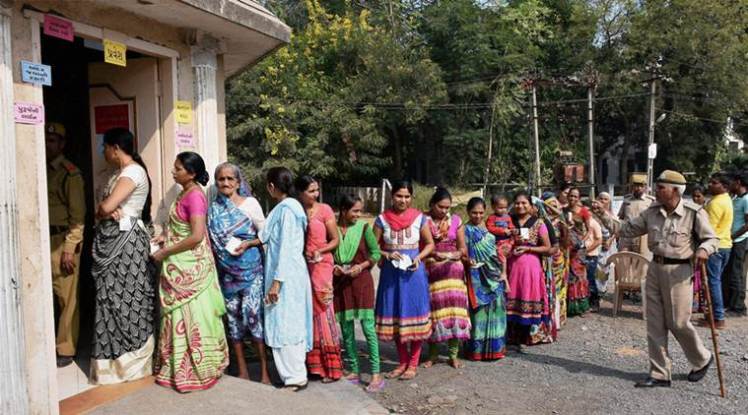 Text of Gujarat voters’ survey report by the Association of Democratic Reforms (ADR), carried out in February-March 2017:

The Association for Democratic Reforms (ADR) has conducted the largest ever survey in India with over 270,000 respondents in 527 Lok Sabha constituencies. The larger purpose of the survey is to highlight voter priorities so that elections in future are fought on voter issues, and more importantly, the manifestos of future Governments reflect voter priorities.

Purpose: The Association for Democratic Reforms (ADR) commissioned a survey of members of the eligible electorate—citizens over the age of 18—during January to April 2017 in order to identify the level of citizen awareness of the electoral process and to ascertain voter perception on specific governance issues and the rated performance of our elected representatives on those issues. The primary purpose of the survey was to assess eligible voters’ access to information about the political process, exposure to inducements for vote, awareness of candidates with criminal cases in elections, general attitudes about electoral process in democracy and expectations from the government.

This report outlines the findings of a survey of Indian voters’ expectations, perceptions and their evaluation of the 30 most important issues for the voters in their particular region in terms of their capacity, governance and specific roles in improving the living conditions of the voters. These aspects are analyzed in relation to the performance of the government on those issues as perceived by the respondents.

To identify what are voter priorities in terms of governance issues like water, electricity, roads, food, education and health, a list of 30 items was given to voters and they were asked to rate the top 5 issues for them. The issues were ranked 1 to 5 where 1 was the most important issue. This list was comprehensive as less than 5% said that there were “other issues” beyond the list.

The results of the Perception Assessment shows the striking difference between the priorities of the voters and the performance on those issues and highlights the overall weak efforts of all institutions in fulfilling their role in providing what the voters really need.

ADR believes that the assessment report can be an important tool in engendering improvements within all institutions in refining their own institutional practices or developing better oversight of other bodies. We hope the report will be instrumental in starting a coordinated effort to work together to ensure the most efficient use of resources to serve the nation as a whole.

The findings of the survey:

Top 10 pressing issues for voters: To identify what are voter priorities in terms of governance issues like water, electricity, roads, food, education and health, a list of 30 items was given to voters and they were asked to rate whether a particular issue was High, Medium, or Low. This list was comprehensive as less than 5% said that there were “other issues” beyond the list.

In Gujarat, Better Employment Opportunities, Better Public Transport and Empowerment of Women are the Top 3 issues about which people are most concerned.

The Top Issues in Rural Areas:

The voting behavior of people in Gujarat

The survey tried to identify the important factors that people take into account before voting for a particular Candidate. Issue like whether the Candidate matters the most or his Political Party or other issues like Caste/Religion of the Candidate, PM/CM Candidate of the party, and Distribution of ‘gifts’ etc. are more important?

See the table below to find out important factors, which people consider before voting for a candidate and what weightage (points) they give to each of the factors: 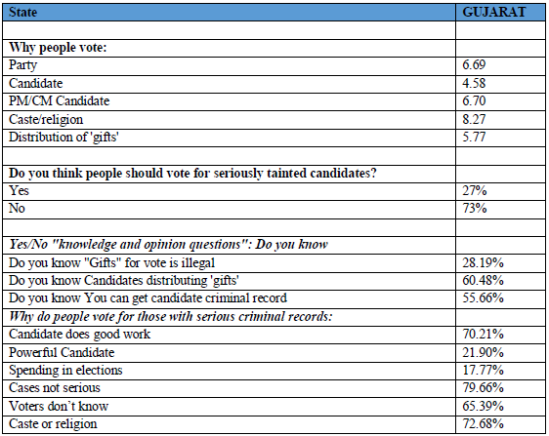 Role of caste, religion, crime and money power in elections

The survey also tried to identify if voters are aware of the use of money and muscle power in elections. Specifically, whether they are aware of distribution of gifts and money by candidates before polls or they have the knowledge about the criminal record of their candidates.

It was observed that nearly 61 per cent of people in Gujarat is well aware that candidates’ distribute gifts and money ahead of elections. However, only 29 per cent people knew such distribution is illegal. 56 per cent people also knew that they could get an information about the criminal records of their candidates easily.