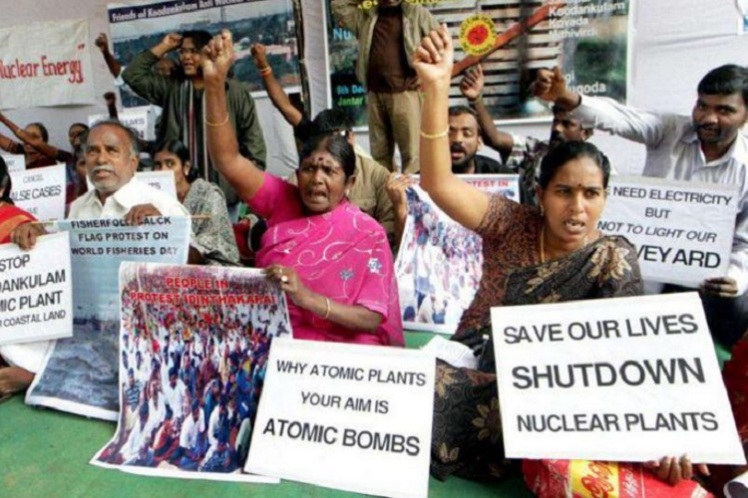 Amid the deepening crisis of the American nuclear lobbies, officials of the near-bankrupt Westinghouse corporation are visiting India this week, according to the media reports, to promote their nuclear sales pitch. While the project-affected communities have announced protest on the ground, a solidarity statement was launched on our website and it has received more than 500 signatures of leading independent experts, activists and concerned people from across the world.

The solidarity statement has been launched jointly with a number of eminent civil society groups of the United States, India, Japan, Germany, Australia and Taiwan. These include the National Alliance of Anti-nuclear Movements(NAAM), People’s Movement Against Nuclear Energy(PMANE), Poovulagin Nanbargal, DiaNuke.org and Lokayat, from India, the  Nuclear Information and Resource Service(NIRS), Beyond Nuclear, Coalition Against Nukes(CAN), and, On Behalf of Planet Earth, which are based in the United States, the Bürgerinitiative Umweltschutz Lüchow- Dannenberg from Germany, Civil Action Against ODA and Export of Nuclear Technology, and, No Nukes Asia Forum from Japan, Friends of the Earth Australia, Homemakers United Foundation, Mom Loves Taiwan Association, and Taiwan Environmental Protection Union, from taiwan and the Nuclear-Free Bataan Movement, Philippines.

The statement below raises some crucial and urgent issues regarding safety, viability, and economics of the project as well as its unacceptable environmental and social impacts.

We express our strong opposition to the Kovvada nuclear project planned on the eastern coast of India, where officials of the US-based nuclear corporation Westinghouse will be visiting in mid-February to resuscitate the plan. The six-reactor project to be set up by Westinghouse even as it has become a disastrous financial liability for its parent company Toshiba, has faced strong grassroots resistance ever since its inception.

– The communities in and around the village of Kovvada in the state of Andhra Pradesh see it see it as a threat to their environment, health, livelihood and traditional lifestyle. Initially, Westinghouse-Toshiba had sought to build the AP1000s in Gujarat, but was chased out by enormous public opposition and shifted its plans to Kovvada. At the Kovvada site, GE-Hitachi were given a contract to build reactors but they pulled out after refusing to commit to paying liability in case of a potential accident in the future.

– The financially destitute Westinghouse wants to supply India with six 1,208 MW reactor units of its AP1000 design. However, the AP1000 design is untested and has run into regulatory issues, massive cost and time over-runs and serious safety questions in the US, UK, China and other countries. Westinghouse has no business preying upon communities in India by pushing its untested nuclear technology on an unwilling population.

– This project is an all-round disaster-in-the-making, as it threatens to destroy the fragile ecology of India’s eastern coast, and endanger the safety of people in densely populated areas. It will disenfranchise thousands of people in local communities by depriving them of traditional livelihoods and sustainable lifestyles which they have maintained for centuries.

– The 2008 US-India nuclear deal helped open the way for nuclear companies like Westinghouse desperate to maintain a foothold in a precipitously falling global nuclear market. The deal, first introduced in 2005 by then US President George W. Bush and Indian Prime Minister, Manmohan Singh, lifted a three-decade US moratorium on nuclear trade with India. It provides US assistance to India’s civilian nuclear energy program, even though India is not a signatory to the nuclear Non-Proliferation Treaty, a condition for such international deals.

– Westinghouse clearly sees India as easy pickings. The Indian government has finalised nuclear agreements as part of its geo-political strategy, without ever doing its homework on the environmental impacts, cost-benefit analysis, safety assessment or any democratic consultation on the energy future of the country. Furthermore, Indian authorities have clamped down on protesters by subjecting them to violence, trumped up charges and accusations, and excluding them from public meetings by force. Today, their basic human rights, guaranteed under the Universal Declaration of Human Rights of the United Nations, stand compromised.

– The US government has been pressuring India to do away with the provisions of its domestic nuclear liability law although it provides ridiculously limited protection to the potential victims in case of a nuclear accident. The Indian government has made every effort to comply with US demands and to undermine the act through back-door deals, including providing for an insurance pool created by public-sector companies where the nuclear suppliers can channel their liability. The manner in which the US government has been pressurising India to further dilute the nuclear liability law to reduce liability devolving on the reactor supplier in the event of an accident attributable to shortcomings in the safety of reactor design has raised serious public apprehensions on the safety of Westinghouse reactors.

– Westinghouse has a lamentable track record in the US. One of its two projects — to build two AP1000 reactors in South Carolina — has already been abandoned, leaving ratepayers with a $9 billion debt burden. The two plants were so massively over budget and behind schedule they were predicted to have cost at least $26 billion if completed, nearly three times the original projected price of $9.8 billion. A second Westinghouse US project for two AP1000 reactors in Georgia is more than five years behind schedule. Costs there have at least doubled and are predicted to rise to more than $27 billion, double the initial estimate of $14 billion. It was re-evaluated late last year and given the continued green light, but it is ratepayers again who will bear the burden of the project’s vast expense.

– If Westinghouse is permitted to go forward with the Kovvada project, India can anticipate interminable delays, massive cost overruns and environmental contamination at best; a nuclear disaster at worst, if indeed the project ever gets completed, which is doubtful. What is more likely is that Kovvada’s economy and ecology will have been ruined and time will have been wasted that would have been better used installing cheaper, cleaner and safer renewable energy instead.

– India is one of the very few countries that did not conduct independent safety audits and reviews after the 2012 Fukushima accident. It remains in complete denial as to the insurmountable risks that nuclear power poses.

– No “Environmental Impact Assessment (EIA)” has been conducted even after 10 years of the announcement of the Kovvada project. Situated in Srikakulam District on the shores of Bay of Bengal, this project would endanger the precious bio-diversity of the region and the surrounding environment.

– The project does not even make economic sense. The effective cost of electricity from the nuclear plant in Kovvada will be at least 4 times the current market tariff in India. The latest open bids for decentralised solar have been even cheaper than existing thermal power.

– Local communities have been protesting intensely against forcible land acquisition for this project. They have repeatedly said that it is not just a matter or better compensation — they do not want any nuclear plant at all. India’s past record in rehabilitating the communities displaced by various big projects – dams, mines, thermal power projects etc – has been extremely poor and after the experience of the Bhopal accident citizens can hardly rely on the authorities for accountable response.

For all the above-mentioned reasons, the local communities and activists in Kovvada will protest when the Westinghouse officials visit Kovvada next week. We must join them in solidarity, and must together say a strong “NO!” to this outrageous nuclear misadventure before it is too late.