Even as the Gujarat government is all set to come up with the 2018-19 budget, an analysis of the allocations for the scheduled castes (SCs) and scheduled tribes (STs) over the years suggests that the two marginalized communities have been getting a raw deal despite their clear social exclusion, whether it is health, education or social justice.

The analysis further shows that, in the financial year 1916-17, the Gujarat government could not spend the full amount allocated for SC sub-plan. Thus, against the total allocation of Rs 2,373.06 crore, the spending was Rs 2,204.2 crore, a shortfall of 168.86 crore, suggesting that 7.22% of the budget for SCs allocation could not be spent.

Significantly, a breakup suggests that the shortfall in spending was particularly high in such crucial sectors like general education (to the tune of 20.57%), technical education (22.41%), health (12.97%), urban development (37.33%), labour and employment (11.59%), social justice and empowerment (14.51%), and nutrition (17.98%). These are also the sector in which the SCs are particularly found struggling.

In fact, there is reason to agree with the Pathey analysis, which says, “The situation has not changed over the last 32 years. Not only has the Gujarat government failed to spend the full amount in any year over the three decades, spending on an average 80% of the budgetary allocation meant for SCs. Things became worse because the allocation of less than 3% of the total budget, which is far lower than the actual SC population of Gujarat, 7%.”

Things are no different for the STs either, the Pathey analysis shows.  Forming about 15% of the population, the Gujarat government came up with what it called Vanbandhu Kalyan Yojna, begun in mid-2000s, to boost the ST sub-plan budget. An analysis of the 2015-16 spending, however, suggests that the Gujarat government allocated Rs 4,219.78 crore for ST sub-plan. Of this, it could only spend Rs 3,698.40 crore, which means that 512.38 crore or 12.36% of the allocation remained unspent, and was diverted to non-ST sectors. 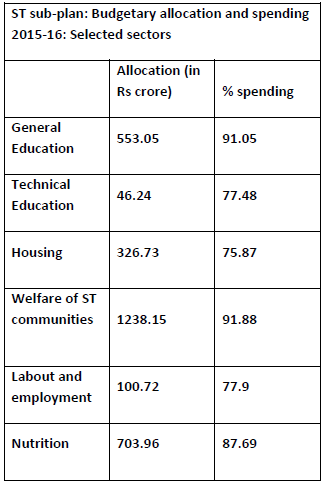 The low allocation has been made despite the fact that, according to Census figures, 36% of Gujarat’s tribal households depend on casual labour in agriculture for their livelihood. Large sections of them continue migrating to different urban and rural areas following the monsoon season in search of jobs, despite the fact that the Gujarat government’s main thrust in the Van Bandhu Kalyan Yojna was to create conditions to stop tribal migration.

Figures show, majority of tribals live in a constant state of destitution and malnutrition, spending around 70-80% of their income on food, with hardly any spare income left for spending on education, health or asset formation. Studies conducted the Surat-based Centre for Social Studies show that malnutrition in some of the tribal talukas is as high as 94% in children aged 5-15 year.

The Indian Council of Agricultural Research (ICAR) has reported that only 32% of the total cultivated land in Gujarat is irrigated. In tribal areas, the situation is more worrisome: 45% of the 43 talukas inhabited by tribals have less than 15% of the cultivable land under irrigation, while 30% have less than 5% of the land. Only 3 talukas match the state level. What has made matters worse is, in Gujarat, only 44% of tribal pleas for land under the Forest Rights Act have been accepted and declared valid for titles, which is lower than many states – Kerala (66%), Odisha (64%, Jharkhand (55%), Telangana (51%), Andhra Pradesh (50%), Rajasthan (50%), and Chhattisgarh (44%).

Interestingly, the SCs and STs have been getting a raw deal in allocation at a time when, following the Government of India guidelines, the state government last year replaced the Scheduled Castes Sub Plan (SCSP) and Tribal Sub Plan (TSP) components of the Budget with what it now calls “allocations for welfare of  Scheduled Castes and Tribes.” This has happened alongside the removal of plan and non-plan categories. This has also happened despite the fact that a high-level Government of India committee a decade ago had recommended that the allocations to SC/ST scheme should be in proportion to their population.