In an unusual move, in 2013, tribal residents of Mendha Lekha, a tribal village in Gandchiroli district of Maharashtra, decided to transfer the ownership of their farmlands, about 200 hectares, to the Gram Sabha. This, according to Pallav Das, one of the authors of an article published in the recently-published book “Alternative Futures: India Unshackled” (edited by Ashish Kothari and KJ Joy), happened because villagers considered “land as a community resource and not as individual property.” Calling it a “revolutionary concept of the ‘commons’ (air, water, forests…)”, Das says, the villagers, belonging to the Adivasi Gond community, have not stopped there. They have, in fact, gone a step further by organizing “cultivable land into collective ownership”, adding, “This ensures that the land stays in the ownership of the village and individual owners are not tempted to sell land to land sharks operating in the adivasis region.” He quotes community leader Devaji Tofa as saying, “With private ownership, people tend to get selfish and isolated.”

While the author in his article, titled “Power Equation and India’s Future”, continues with his Mendha Lekha theme for three more pages, pointing towards how it created the “first crack in the power structure in 2009”, when it became one of the first two villages in the country to implement the Forest Rights Act (FRA), Das is not the only one who strongly believe in a solution on the lines of Mendha Lekha model, of community living as a way out of the complex problems India faces today.

MP Parameswaram, in his essay, “Date to Dream”, says that “self-reliant and self-sufficient communes” formed in “Ralegan Siddhi, Hirave Bazar and Medha Lekha”, even though dependent on state, “began to strengthen their local economy, produce more and more of the necessities of life, reject goods with only vanity value, and boycott goods of large scale and corporate enterprise.” Glandstone Dungdung in his “Vision for Adivasis” wants the Adivasis to learn from Mendha-Lekha, “which established self-rule more than two decades ago with the slogan, ‘Our government in Mumbai and Delhi, but we are the government in our village’.” And, Ashish Kothari and KJ Joy, in their essay “Looking Back into the Future”, where, in an imaginary address by one Meena Gond-Vankar in winter of 2100, point towards how Mendha Lekha “in Central India took the revolutionary step of placing all agricultural land into the village commons, while reclaiming their collective rights to forests, water, and grazing land from state ownership.”

A collection of 35 essays, all of whom seek to talk about “future as a possibility”, a term used by well-known sociologist Shiv Visvanathan in his Foreword, the book is dotted with what its editors Kothari and Joy call in the introduction, the authors’ own “utopian nature of the visions”. According to them, while many readers might find such an approach objectionable, “this is understandable, for we are constantly made aware of how serious a situation we are in, how difficult it is to make even small changes and sustain them… and for those with historical knowledge, how many revolutions have started with similar visions but failed to achieve them.”

Indeed, except a few of them, most of the authors seek to imagine some type of utopia, which appears difficult to realize, especially today, when India’s democratic system appears to be at risk. Thus, in their essay, “Changing natures: A democratic and dynamic approach to biodiversity conservation”,  Kartik Shankar, Meera Anna Oommen and Nitin Rai say, “Communities that are the connected with the land and the sea are the best stewards of the environment and resources”, making one wonder, whether this is so at a time when the India’s forests and sea shores are being opened up to private corporate houses, even as providing legal alibis for doing it. The authors talk of “community based customary areas” of indigenous peoples and “community conserved territories”, and want to put “more lands under common property regimes managed by nested democratic institutions.” They insist, while recent focus has been on “biodiversity and conservation”, and “there have been some successes at city-wide scales, we suggest that small communities work best together.”

Anand Teltumbde in his essay “Envisioning Dalit futures” seeks a solution in what has long been rejected even by die-hard communists – whether it is Russia, China, or West Bengal. Wanting all village land to be nationalized as a solution to rural casteism, he says, “Caste being integral with the village power structure and land being the signifier, it holds key to the caste system. It can be accompanied by abolition of private property beyond homesteads. All cultivable lands may be nationalized and parceled out to village collectives formed by the families desirous of cultivating lands in common on the basis of established local knowledge and modern technologies.” 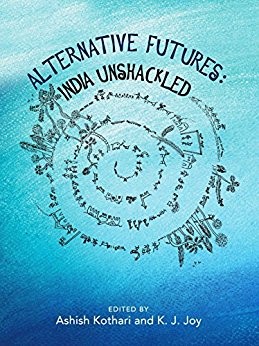 In “Technological alternatives to Indian futures”, Dinesh Abrol seeks a solution in “cooperatives and group enterprises”, insisting, “Network forms can be co-evolved by adopting the frame of local economies”, which can be upgraded as muti-sectoral network forms of group enterprises, led by “worker management and active participation of petty products in enterprise development”. lse Kohler-Rollesfson and Hanwant Singh Rathore in their essay “Pastoral futures in India”, insist, “Future of livestock production should be decentralized and tailored to make optimal use of local biomass, capacity building and support to  young pastoralists”, even as wanting to develop “value chains that promote and support pastoralism.” And, in their essay, “Anna Swaraj: A vision for food sovereignty and agro-ecological resurgence, Bharat Mansata, Kavitha Kuruganti, Vijay Jardhari and Basant Futane, while rejecting the Green Resolution model which, according to them “pushed farming and farmers towards a crisis of unsustainability, pollution and impoverishment”, want to fall back upon “ecological farming” as “a path of agro-ecology, based on careful management of natural resources by small scale farmers.” This, according them, alone would “reduce vulnerabilities.”

There are, of course, those take these types of utopias with a pinch of salt. Shripad Dharmadhikary and Himanshu Thakkar in their essay, “Future of Water in India”, agree that there may be an “urgent need to ensure community driven regulation of groundwater management”, but emphasize, the fact is, “there is absolutely no credible movement in that direction.” According them, as of today, the only strategy which could be pursued is to go on and “keep fighting for institutional changes.” And Aruna Roy, Nikhil Dey and Praavita Kashyap in their essay “Allowing people to shape our democratic future”, seek growth in “synergies between people’s movements”, even as “allowing cross fertilization of ideas to enable people to see intrinsic connection between economic, social and political rights, with control over ecology and natural resources.”

Taking a sharply different view, Aditya Nigam, arguing for “a radical social democracy” by drawing upon the visions of MN Roy, Dr BR Ambedkar, Mahatma Gandhi and Rabindranath Tagore, believes, “Modernist utopias, irrespective of whether they were Marxist or liberal free market type, eventually became massive projects of social engineering that relied crucially on the state to enforce them.” He reminds the reader, without naming the countries he might be hinting at – Russia or China – “These projects were inherently violent, based as they were on the cognitive ignorance of the modern mind that sought to eliminate all signs of ‘backwardness’ and ‘irrationality’…”, calling them “modern forms of exploitation and violence.”