A Fact-Finding Team under the banner of Bhumi Adhikar Andolan (BAA) visited Bharatpur, Alwar, Rajsamand and Udaipur in Rajasthan on 6th and 7th January, 2018 to look into the increasing incidents of lynching and attacks in the name of “Gau-Raksha” (Cow Protection), encounter killings, deliberate communal polarization and attacks on Muslims in the state. The team included members of Parliament and state assembly, and civil society leaders. Excerpts from the report* based on the findings of the BAA team, released by at its National Convention (March 20-21 2018), in New Delhi:Unfortunately, the Government of India and the State Government of Rajasthan have failed to live up to the expectation of citizens and have failed to ensure security and peace to the minority communities. So far more than 30 innocent persons, all Muslims, have been lynched in different parts of the country under the NDA government led by Prime Minister Narendra Modi. Rajasthan has become the epicenter of such criminal attacks; the state of unrest has to be reversed to aid and protect the unity of India and its people.

Of all victims, killed or injured, whose identities were reported in the media, 53% were Muslim, 12% were Dalit, and 10% were Hindu. The most common factor among all the victims was that those killed by cow vigilantes were poor farmers. In a third of all the cases, i.e., 26 of 78 cases, the police filed counter cases against the victims under cow-protection laws. Among the 78 incidents reported, the number of total victims was 293, 29 of those persons were lynched. 50 out of 78 incidents occurred in Northern India. Despite this alarming rate of killings, the respective State Governments as well as the Government at the Centre have failed to investigate the attacks in a credible fashion.

The lynching in the name of “cow protection” has gone to the level of “gautankwad” (cow terrorism). Most of the attacks are based on rumors. At least in a few cases no arrests of the murderers have been made whereas in a large number of cases, as in the case of Umar Khan of Gatmeeka, the police have registered cases against the victims/ survivors. Absence of any punishment to the offenders has emboldened the cow vigilantes to lynch with impunity. The reasons for lynching varies from accusing the minorities of smuggling cattle, slaughtering cows, storing beef to wearing skull caps. The pattern of incidents reveal that cow terrorists resort to lynching and attack when they find a Muslim as an offender, no matter what the perceived offence is.

With the passing of privacy judgment, we are bound to deduct that “life and personal liberty” from which the right to privacy primarily emerges, has to be now read with Articles 19 (1) (g) and 25 of the Constitution as well. Article 21 is not the lone repository of liberty and Fundamental Rights not a series of isolated points. As a result, one’s right to eat food of one’s choice has no meaning, unless that food is reasonably available to purchase. Hence, freedom to trade cattle, slaughter it and to eat that meat /beef shall be a natural corollary of the privacy rights declared by the Apex court in Puttaswamy’s case.

Similarly, right to privacy have to be read in the context of religion also. India being a secular nation cannot tell non- Hindus as to what to eat and what not to. Further, slaughter prohibition laws prevailing in India infringe the right to nutritious food of a person. In order to sustain these laws on the ground of reasonable restriction, the State has to prove the compelling State interest and prove the food is injurious to the health of the person/s having it.

Law is based on reason. The purpose of an enactment shall be to reform the society. The punishments envisaged to handle the law and order situation of a society is reflective of the stage of civilization through which that society is passing through. Excessive punishments are helpful only to undermine the respect for law.

It is noteworthy that many of the cow vigilante states are imposing harsher punishments for cow slaughtering/ trading compared to the provisions of Indian Penal Code protecting human life and liberties. It is also pertinent that these stringent punishments violate the classical arrangement of punishments basing on the distinction of crimes as “minor” and “major”. Such scheming of punishments in cattle protection laws are arbitrary and hence violate Artricle 14. 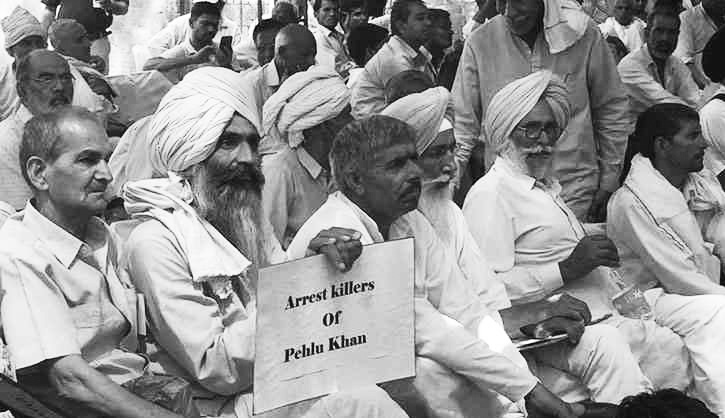 With the advent of barbarous, arbitrary and unreasonable cattle protection laws, cattle became a liability to maintain after they grow old, leading to spread of dangerous diseases and demanding a lot of resources to maintain. The skewed government policy and its reckless implementation has led to a situation wherein cattle owners are left with no other option but to abandon their unproductive cattle. Plummeting cattle population has caused serious fodder crisis. When the abandoned cattle devour the fodder kept for milch cattle/ or when crops are eaten, these stray animals are mercilessly thrashed. Thus, the laws which are supposed to be protecting the cattle have proved to be a bane for them only.

So, cattle owning is only region based and not religion based. But the curious fact that it is Muslim community that is primarily dependent on meat industry for food and employment reveals the driving force for BJP governments to implement cow protection laws in a communally charged manner!

The fact-finding revealed that, in the state of Rajasthan, there is total loss of faith in the law and order mechanism. It is a matter of grave concern that the main opposition party in the State, the Congress has failed to address the issue and mobilize opinion against the communal attacks on citizens. Unfortunately, they have made no efforts to reach out to the families of victims or those facing attacks or being arrested on false charges.

The continuous attacks upon the minorities in the guise of cattle protection would divide the people on communal lines. If it is allowed to continue, the unity of the country in the long run will be in peril. Hate crimes are violent manifestations of intolerance against entire communities. They have a deep impact not only on the immediate victim but also the community with which the victim identifies, affecting social cohesion and stability.

The victims and their families have been living in these villages for generations and generations, rearing cattle as their only livelihood. There hasn’t been any substantial change or transformation in their lifestyle, social involvement and transaction. But overnight their position in society and the communal harmony have been changed oppressively/turtle turned on the inception of the new communal regime of fascist tendencies.