Excerpts from the book “Breathing Life into the Constitution: Human Rights Lawyering in India”, by Arvind Narrain and Saumya Uma, published by Alternative Law Forum – 1

The social and economic inequality that BR Ambedkar adverted to finds its most painful manifestation in the condition of the Dalit community, who are at the very bottom of the graded and hierarchical social system called caste. Caste is a deeprooted social reality structuring the relationship between communities; condemning certain communities to an existence at the receiving end of oppression, exclusion, and stigma. The Indian Constitution was fully cognizant of the reality of deep inequality in society and explicitly addressed the issues of caste discrimination.

The laws meant to tackle caste based discrimination and violence against Dalits such as the SC/ST Prevention of Atrocities Act (POA), 1989, Protection of Civil Rights Act, 1955 and the Prohibition of Employment as Manual Scavengers and their Rehabilitation Act, 2013 face enormous challenges when it comes to the question of implementation as they go against a dominant caste based notion of morality. Law is a deeply weakened instrument in such a context, because, to succeed, the law must overturn millennia of caste-based thinking.

Keeping in mind the difficulties in implementing such a law, it is still a deeply relevant instrument which can be deployed to question caste bias and prejudice at a normative level. Law in this case functions as a counter-majoritarian instrument which seeks to check and control a majoritarian prejudice. State law becomes even more relevant – in spite of its many limitations – because the law seeks to act on behalf of a geographically scattered and weak minority. In Dr. Ambedkar’s analysis, the coercive power of the law is a force which should be mobilized to counteract the culturally and socially sanctioned prejudice of the majority community.

As he puts it, “Sin and immorality cannot become tolerable because a majority is addicted to them or because the majority chooses to practice them. If untouchability is sinful and an immoral custom, then in the view of the depressed classes, it must be destroyed without any hesitation, even if it was acceptable to the majority.”

In this context of majoritarian bias, the coercive force of the law must be mobilized on the side of right and morality. Speaking of the most insidious form of violence faced by the untouchables, namely the social boycott, he says:

“We do not know of any weapon more effective than the social boycott which could have been invented for the suppression of the untouchables. The method of open violence fades before it, for it has the most far reaching and deadening effects. It is more dangerous because it passes as a lawful method consistent with the freedom of contract. We agree that this tyranny of the majority must be put down with a firm hand if we are to guarantee to the untouchable the freedom of speech and action necessary for their uplift.” 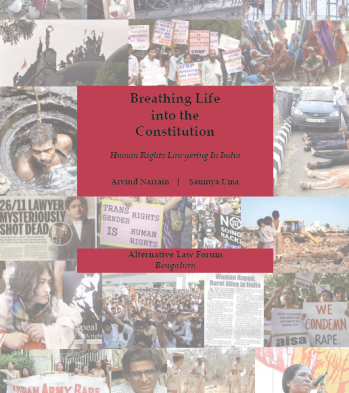 The Golana massacre of 1986 ignited the struggle for justice for Dalits in Gujarat. On 26 January 1986, four Dalits were killed by upper caste Darbars (Rajputs) in the village of Golana, situated off Bay of Khambat, state of Gujarat. The immediate motivation for the attack was the loss of social power faced by the feudal landlords (Darbars) of the village pursuant to an allocation of government land to the Dalits. The killings were a part of a mass attack on the Dalits of Golana during which eighteen Dalits were seriously wounded and several Dalit houses were set on fire.

Martin Macwan speaks of the dismal situation prior to the massacre as encompassing two stages. In the first stage, members of upper caste communities would commit atrocities on the Dalits with complete impunity and there would be no police complaint lodged as the affected persons did not know that they could lodge a complaint, and because they did not think crimes had been committed. At a later stage, the Dalits knew that what was perpetrated was a crime but were frightened to approach the police station.

However, with the Golana massacre, something changed. Dalits mobilized through the legal process and filed complaints in the police station. In addition to initiating the legal process, Dalits also vocally protested against the massacre and demanded justice on the streets. They thus brought visibility to the issue of Dalit atrocities throughout the state of Gujarat. Martin Macwan emphasized the importance of social mobilization:

“What Navsarjan has done is use law as one strategy. However, at the same time, we also mobilized people across villages, which is part of our social strategy. We brought these two together, and that is what produced an impact. Social mobilization by itself cannot bring about an impact, neither can law by itself. But the two together can.”

In the context of the Golana massacre, social mobilization was done by getting people from hundreds of villages to Golana thereby demonstrating that what happened in Golana mattered to Dalits around the state. Martin Macwan points out that since Dalits are a minority in most villages, there is a necessity to create a physical majority by mobilizing Dalits from other villages to visit the affected village, and to identify with the cause. This has a psychological impact on the minds of the upper castes as there is a visual representation of the enormous number of people contesting their power.  In Martin Macwan’s words:

“The upper castes undergo a sense of powerlessness from a sense of omnipotent power. You have to create that feeling that you don’t have that power today. And then the law works. The police come under pressure once they see the mobilization. At one time, we have also filed cases against the police officers (who have not discharged their duties).”

This process of demonstrating that Golana mattered included raising resources from people from around the state who not only donated food and clothing but also gave money to support the litigation. Navsarjan established a local committee which raised Rs 2 lakh and in fact after the thirteen year legal battle ended, there was still a balance of about Rs. 64,000. According to Martin Macwan, the fact that people from all over the state contributed donations and supported the Dalit cause was of great importance.

After the massacre, members of upper castes would use it as a form of threat in all the villages: “Be careful or else we will do to you what was done in Golana!”  However, the use of Golana as a threat by the upper castes changed after the decision thirteen years later in which eleven of the accused persons were sentenced for life. After the sentence, it became possible for Dalits to say that if you perpetrate atrocities like Golana, you will go to jail. Termed as the biggest conviction that Gujarat witnessed on the caste question, Martin Macwan opines that the response to a single incident was responsible for the decrease in incidents of Dalit atrocities and age-old oppression across Gujarat.