By Shashi Saxena and Shahana Bhattacharya*

In August 2015 the Law Commission had recommended abolition of death penalty except in terror related cases. Recently 14 states have responded to these recommendations. Barring the exception of Karnataka and Tripura, other 12 states have rejected the recommendations. The states opposing the move include Gujarat, Madhya Pradesh, Chhattisgarh, Rajasthan, Bihar, Jharkhand, Tamil Nadu and Delhi. PUDR strongly deplores the responses of these states against abolition.

Along with other reasons, lack of coherence and consistency in awarding death penalty and granting clemency formed the basis for the Supreme Court asking the Law Commission to examine the issue of death penalty. Another point of concern was that even where there was unanimity among various levels of the judiciary regarding certain cases falling within the definition of the rarest of rare, the diametrically opposite position was adopted by the Executive.

Referring to the 2007 resolution adopted by the United Nations General Assembly calling on countries to observe worldwide moratorium on death penalty, the Supreme Court expected a “credible research by the Law Commission or the NHRC for an up-to-date and informed discussion on the subject.”   Accordingly the Commission, under the Chairmanship of Justice A.P. Shah carried out an extensive study and came out with its recommendations to abolish the death penalty except in terrorist related cases in its Report No. 262 titled “The Death Penalty” (2015). 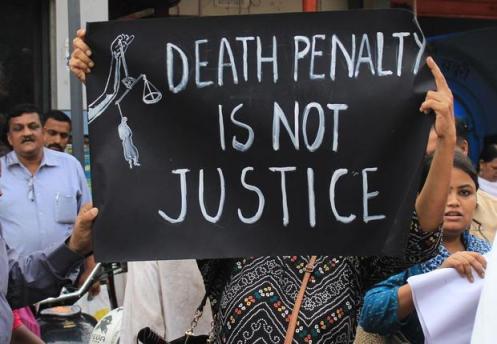 In the conclusion of the report, the Law Commission has pointed to the arbitrary nature of sentencing, based on rigid standardization and categorization of offences, without adequate attention being paid to differences between cases. Majority of death row prisoners in India, which currently stands at 371, are from poor and lower caste background. In most of these cases sentencing has been done viewing the crime in abstraction from socio economic context under which these crimes were committed.

The rejection of the Law Commission’s recommendation to abolish of death penalty also signifies the hardening stand of the Indian Executive towards a just society based on democratic principles and norms. This is observed not only on the issue of death penalty but also on many other issues that impact the life of marginalized and minorities in India. This is also reflected in India’s vote against the UNHRC resolution on the question of death penalty that called for affording equal access to justice to the economically vulnerable among other safeguards.

PUDR would like to reiterate its principled position against Death Penalty and demands its complete abolition as this punishment goes against the very basis of a democratic state. PUDR expects from the Indian Government, which prides itself as being the largest democracy in the world, to act as a protector of individual’s rights to live with the dignity and accept the recommendation of the Law Commission.