Excerpts from “Report Card on the Performance of Information Commissions in India”, by Satark Nagrik Sangathan (SNS) and Centre for Equity Studies (CES), collective effort of many people, coordinated by Anjali Bhardwaj and Amrita Johri:

For institutions that are vested with the responsibility of ensuring that all public authorities function transparently and adhere to the letter and spirit of the RTI Act, it would perhaps be fair to expect that information commissions lead by example.

ICs are also public authorities under the RTI Act and therefore, other than responding to applications for information under law, they are also required to proactively disclose (under section 4) information on their functioning and the details of decisions taken by them.

“(3) Each report shall state in respect of the year to which the report relates,—

(a) the number of requests made to each public authority;

(d) particulars of any disciplinary action taken against any officer in respect of the administration of this Act;

(e) the amount of charges collected by each public authority under this Act;

(f) any facts which indicate an effort by the public authorities to administer and implement the spirit and intention of this Act;

(g) recommendations for reform, including recommendations in respect of the particular public authorities, for the development, improvement, modernisation, reform or amendment to this Act or other legislation or common law or any other matter relevant for operationalising the right to access information.”

No response to RTI applications

Three information commissions did not respond to, or even acknowledge, the RTI applications filed as part of the report:

Madhya Pradesh: Since the SIC of MP did not respond to any RTI application, first appeals were filed against deemed refusal of the SIC to provide information (under Section 7(2) of the RTI Act, the failure to respond to an RTI application within the specified time-frame is deemed to be a refusal of the request). The MP SIC refused to accept the first appeals stating that a fee of Rs. 50 had to be deposited with each appeal31. Even though the fee was subsequently paid, the commission failed to dispose the appeals in the stipulated time-frame of 45 days. In fact, other than the correspondence regarding the non-payment of fee for appeal, the IC did not send any response to the RTI applications or first appeals.

31 Whereas the RTI Act provides for a reasonable fee to be charged to apply for information (application fee) and to obtain information (cost of photocopy/CD etc.), several state governments have also prescribed a fee for filing appeals, even though there is no such explicit provision in the RTI law.

Andhra Pradesh: The IC did not respond to any RTI application. A first appeal was filed in each case against deemed refusal of the commission. None of the first appeals were acknowledged, nor was any notice of hearing or order on the appeals given.

The refusal to accept IPOs as a mode of payment causes unnecessary hindrance and additional cost for citizens in accessing information. The cost incurred in getting bank draft of Rs. 10 ranges from Rs. 25 to Rs. 50.

Several ICs rejected requests for information invoking provisions seemingly in violation of the RTI Act. In all these cases, an appeal was filed against the denial of information. However, till the time of publication of this report, the requisite information had not been disclosed.

Bihar: The SIC of Bihar denied information sought for 2016 and 2017 on: the number of appeals/complaints registered, disposed and pending with the SIC; number of cases in which penalty was imposed or compensation awarded and the amount of penalty imposed and compensation awarded. The SIC denied information on each of the particulars mentioned above citing three grounds: a) information not maintained in the format in which it was sought; b) information sought will form part of the annual report and as the report has not been published, disclosure of information will lead to breach of privilege of state legislature; c) in light of Section 7(9) which states that “information shall ordinarily be provided in the form in which it is sought unless it would disproportionately divert the resources of the public authority or would be detrimental to the safety or preservation of the record in question”. The denial of information on these grounds is in contravention of the RTI Act. First, section 7(9) is not a ground for denial of information.

It only allows the PIO to provide information in a different form (eg. electronic copy instead of physical copy) if the PIO can show that providing information in the form sought would disproportionately divert the resources of the public authority or would be detrimental to the safety or preservation of the record in question. Second, most of the information sought is in any case required to be included in the annual report under Section 25 of the Act.

Chhattisgarh: The SIC of Chhattisgarh denied information on the number of appeals/complaints registered and disposed during the period 2016 and 2017 by stating the information sought was nirank or blank. No further explanation was provided and no grounds for exempting information under sections 8 or 9 of the RTI Act were invoked.

In terms of information on the number of appeals/complaints registered and disposed during 2016 and 2017, the SIC stated that information was available in the monthly reports provided on the website of the SIC. Even though in the first appeal it was specifically pointed out that the monthly reports for several months were not available on the website of the SIC and for several other months incorrect hyperlinks were provided.

Rajasthan: Of the 5 RTI applications that were filed to the Rajasthan SIC, it provided requisite information in response to only one. In three applications there was no reply. For the application pertaining to penalty imposition, recommendation of disciplinary action and awarding compensation for 2016 and 2017, the PIO illegally denied information stating that the information being asked for was large and would require disproportionate use of resources and hence could not be provided.

Uttar Pradesh: Information relating to penalties, compensation and disciplinary action for the period 2016 and 2017 was not provided by the UP SIC on the pretext that the requisite information is available on the website of the SIC even though no such information was available. Further, the PIO invoked the UP RTI Rules 2015, which appear to be in contravention of the RTI Act, to deny information sought for two years, stating that information sought should not be so vast that its collection involves disproportionate diversion of resources affecting efficient operation of the public authority concerned. 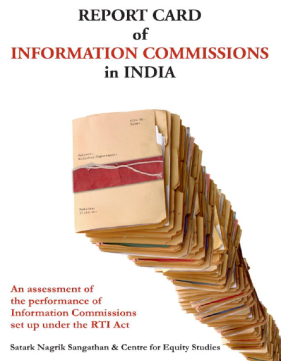 Odisha: The SIC returned all the RTI applications stating that form ‘A’, which has been prescribed under the rules made by government of Odisha, had not been enclosed and no proof of identity of applicants was attached.

Sikkim: The SIC of Sikkim refused to accept the RTI applications citing rules made by the state government, which made it mandatory to furnish proof of being an Indian citizen.

Kerala: The SIC returned the RTI applications citing rules of the state government that Indian Postal Orders were not an acceptable mode of payment.

RTI applications were filed again to each of the SICs of Odisha, Sikkim and Kerala after redressing the specific deficiency, following which they all provided either full or more than 90% of the information sought.

Response to first appeals by ICs