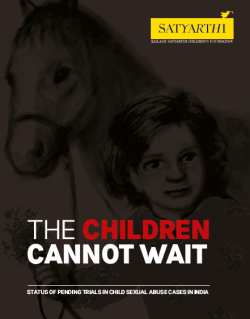 The brutal rape and murder of an eight year old girl in Kathua (Jammu and Kashmir) in January 2018 has shaken the conscience of the nation. The public outcry following this harrowing case is reminiscent of the mass protests against the horrifying gangrape of a young girl in Delhi in December 2012, when justice delivery mechanisms against rape in India were amended to be more stringent and robust.

Amongst others amendments, Section 375 of the India Penal Code 1980 was expanded to include a wider definition of rape. Section 167 of the Code for Criminal Procedure 1973 states that investigation in cases of child rape to be completed within two months of registration of the cases and Section 309 establishes that trial of cases of rape must be completed within two months, as far as possible.

But stories of child rape and sexual abuse such as that from Kathua continue to emerge every day, in the absence of a responsive justice delivery system. In light of this urgent and growing demand for justice for victims of child rape, the Kailash Satyarthi Children’s Foundation (KSCF) presents a state-wise timeline of pendency of cases of child sexual abuse, as per the Ministry of Home Affairs, Government of India response to a Lok Sabha question number 2544 (1st August 2017).

This is related to the prosecution of cases of crimes of child sexual abuse under the POCSO Act 2012 between 2014 and 2016.

Data analysis the completion of trial is too slow

For any particular year the number of cases registered and the pending cases of the previous year constitutes total number of cases for trial. The percentage of cases in which trials have been completed is a mere one tenth of the total cases under trial. This trend has persisted during 2015-16.

Using the information provided to Lok Sabha Unstarred Q. No. 2544 an approximate number of years needed to complete currently pending trials has been calculated.

This has been calculated at India and State level with the assumption that case disposal rate during 2016 is constant. Due to addition of new cases every year for trial, instead of absolute numbers case disposal rate has been used for this calculation. Figure 2 depicts that India will take about 20 years clear the back log of 2016.

At state level it varies from two years in Punjab to more than 60 years in Arunachal Pradesh, Gujarat, Manipur, West Bengal and Kerala.

Pendency on the rise

With regard to conviction rate it is evident that conviction under POCSO has remained constant at 30% during 2014-16. However it has registered an increase of 6% during 2015. Figure 4 clearly maps the trend.