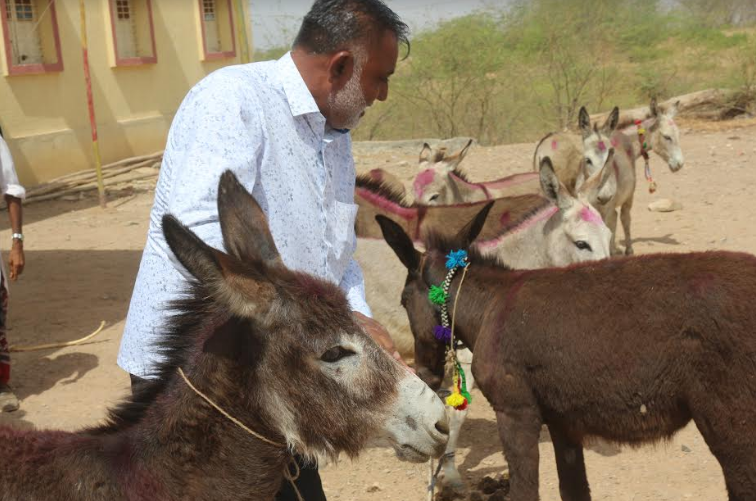 Donkeys as beasts of burden are extremely productive; freeing many from the drudgeries of labor, helping keepers earn a decent income, and in some countries have even been known to have the indirect effect of assisting schooling rates (by letting children go to school instead of being tied up in domestic chores).

Unfortunately, the contribution of donkeys have often been undermined or gone un-noticed. This is because of the general notion at donkeys are stupid and their usage is often in places away from the public eye. This is inspire of the fact that donkeys are intelligent animals, often being able to remember incidents 25 years old. Donkeys are strong too, being able to pull twice its bodyweight on level ground.

This has led to the decrease of the number of donkeys worldwide, and India is no exception. Sahjeevan along with Department of Animal Husbandry-Bhuj organized a mela at the Temple and Samadhi Sthal of Mekan Dada at Dhrang on 8th May. Mekan dada used to roam the desert with his donkey, Laliyo and his dog, Motiyo to rescue men and women lost in the Ranns.

The objective of the mela was to celebrate world donkey day and remind us of the importance of conserving the local breeds. The fair saw participation from 32 donkeys. The participant animals were engaged in races and physical attractiveness competitions. Animals from Mandvi, Bhuj, Khavda, Nakhatrna block participated in the fair. The top three winning animals were awarded cash awards of 5000, 3000, and 2000 rupees respectively.

Sahjeevan with Support of Animal husbandry department Gujarat has submitted breed descriptors of Halari donky of Jamnagar and Kachchhi donkey of Kachchh district to NBAGR-Karnal for registration as new donkey breed of India. In fact India has only a registered breed is Spity donkey from Himachal Pradesh.

The mela was saw enthusiastic participation by the donkey keepers and local villagers who cheered the donkey race and shared their thoughts on donkey keeping at the seminar.