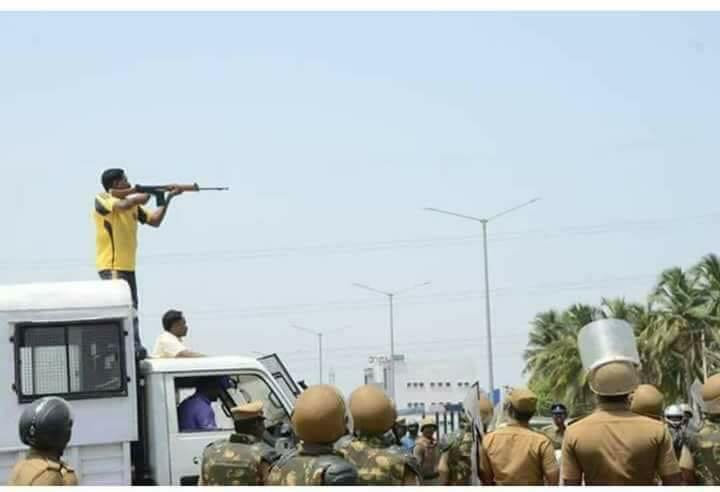 Open letter to the Prime Minister, the Chairperson of the National Human Rights Commission, Tamil Nadu governor Bhanwarilal Purohit, chief minister Edappadi K Palaniswami, the Union environment secretary, and the chairperson of the Tamil Nadu Pollution Control Board by senior activists of the National Alliance of People’s Movements (NAPM) on the killing of over 13 citizens and grievous injury of more than 60 in police firing in Toothukudi, during the anti-sterilite protest:

The entire nation is shell-shocked to know of the ruthless police firing on the 100th day of the Anti-Sterilite protests in Thoothukudi, Tamil Nadu, on Tuesday, leading to the confirmed gunning down of at least 13 persons and reportedly a few others and severe injury of over 60 persons, even as exact numbers of the persons killed and injured is yet to be officially confirmed. Even as we write to you, we have information of another person Kaliyapan (22 yrs), R/o Anna Nagar, killed in a fresh round of violence by the police.

It is no less shocking that the list of those shot dead includes at least 3 women and a 17 year old minor girl ! The names of the deceased as reported in the media are Jayaram, Glastin, Kandhaiyya, Tamilarasan, Shanmugham, Antony Selvaraj, Maniraj, Venista, Vinitha, Kaliyapan. The list of some of the deceased is enclosed.  We convey our full solidarity with the fighting masses of Thoothukudi and extend our deepest condolences to the families who have lost their dear ones, all activists and leaders of the movement, in their own right.

What is very shocking in this incident is not just a clear lack of seriousness on behalf of the Government to dialogue with the people, who have been facing the severe impacts of the polluting copper smelter unit of Vedanta Ltd for over two decades, but a totally callous response, leading to a mass shooting that could have and should have been averted with due diligence and concern by the authorities.

While the people’s version is that police reportedly resorted to wanton lathi charge, use of tear gas, smoke bombs and subsequently started indiscriminate firing, the official version is that some persons from amongst the protestors broke Sec 144, allegedly torched certain government vehicles and began stone-pelting within the Collectorate, in response to which the firing began.  Even assuming the official version to be ‘true’, for a while, the police response in curbing the protest is grossly disproportionate and unjustifiable. As pointed out by witnesses and activists on the ground, the incident raises a whole lot of questions that needs to be answered by the authorities.

Media and ground reports have been revealing many shocking details. There are videos of police personal shooting from a safe distance atop vehicles and firing at protesters. Other reports say that police took aim from vantage points on roofs of buildings too. The protesters don’t seem to be in the near vicinity of the police and these are clearly not acts of ‘self-defence’. Videos of police armed with lathis entering hospital and beating up the injured are also being circulated. Police have apparently even given hot pursuit and shot at women and others in fishing hamlets like Theresepuram. Women and children were brutally hit with sticks and butts of guns.

All this is nothing but a barbaric assault on the democratic rights of the people. The sheer brutality of the police action reminds one of the manner in which the Jallikattu protests were dealt with.  At a fundamental level, the very imposition of Sec 144, preventing protestors from marching peacefully towards the Collector’s office to convey their grievances, is itself an arbitrary and undemocratic move and has become a regular tool to stop people from interacting with officials, as an organized collective.

It is quite known, at least within Tamil Nadu, that the people of Thoothukudi have been protesting against the severe impacts of the Sterilite Copper Plant, a business unit of Vedanta Resources Plc, a notorious metals miner for over two decades now, but successive Collectors, the State Pollution Control Board, the state government and MoEF & CC paid little attention to address their concerns, respond to the cogent evidence already made available by environmentalists and made no attempt to dialogue with the people and resolve the issue in an amicable and meaningful way.

Complaints of ground water pollution, toxicity in drinking water and water for agricultural use, health impacts especially throat and eye cancer, sever sickness amongst residents and workers have persisted for many years in the area and regulatory bodies have failed in their duty, as mandated by law. All of this is a gross violation of right to life, livelihood and safe, healthy and wholesome environment as enshrined in the Constitution of India and repeatedly upheld by the Supreme Court.

Copper smelters are categorized as Ultra Red, Large, Hazardous industries owing to their pollution potential. While complaints of impacts of the previous plant have remained unheeded, the company proposed to construct a second copper smelter in the vicinity, in the densely populated area and the same has been fiercely contested by the residents for many months.

The current phase of protest started in early March when this expansion of the Sterlite plant to double capacity was announced. On the 100th day of protest on Tuesday against the Sterlite copper unit of Vedanta Ltd, the people of Thoothukudi took out a pre-announced march towards the collectorate. Over 10,000 people – men, women and children participated and reiterated their demand to shut down the existing copper smelter and not permit any further expansion.

Infact, as a result of a similar protest participated by tens and thousands of people with no untoward incident in March, 2018, the Tamil Nadu Pollution Control Board (TNPCB) and the Rural Development Officer (RDO), took groundwater samples from 7 locations within Sterlite factory premises and 8 from villages around the factory. The results revealed widespread and high levels of contamination in all 15 groundwater sources, in violation of the Bureau of Indian Standards norms, Levels of the neurotoxin heavy metal lead, which is particularly toxic to children, were found to be between 4 and 55 times higher than levels considered safe for drinking water.

We are of the strong opinion that the brutality witnessed on Tuesday was not by any measure a ‘spontaneous police action’, but a tragedy in the making, due to years and years of neglect and inaction by all the authorities including the Chief Minister and Government of Tamil Nadu, Union Ministry of Environment, Forests and Climate Change, the Tamil Nadu Pollution Control Board, Ministers and Secretaries holding the environment portfolios at the central and state, the Thoothukudi District Administration who all have in different ways enabled Vedanta Sterlite to violate environmental and land use planning laws with impunity for over two decades, despite overwhelming evidence of illegalities, environmental harm and damage to public health.

Clearly, it is collective failure of these authorities that has resulted in exacerbation of the situation, leading to this most inhuman massacre. Environmental activists in Tamil Nadu have alleged that the state and central governments have allowed Sterlite to operate with lower-than-required chimney stacks, thereby exposing lakhs of residents to higher levels of toxic pollutants. It has ignored the tentative findings of a government medical college’s health study that reported higher incidence of certain health problems among the villagers living around the factory.

Thus, the sole responsibility of the shooting lies with not just the police and the district administration, but with all the aforementioned authorities. For, it was a bloody culmination of over two decades of blatant disregard for the lives and wellbeing of the people and protecting corporate interest. In 1992, Sterlite was allotted land in Maharashtra, but was shifted to Tamil Nadu due to massive protest by the people of Ratnagiri. The Genesis and the growth of Sterilite in Tamil Nadu is an example of how the deep crony capitalism is entrenched in the system. The project received environmental clearance in January 1995, even before the Environment Impact Assessment (EIA).

Notably, this is not the first time that Sterlite’s pollution and the impunity it enjoys has been the cause of public anger in Thoothukudi. There have been periodical complains made to TNPCB of health issues causing gas leak, draining toxic waste along with rainwater, polluting the groundwater, but each time Sterlite got a clean chit. In 2013, the Supreme Court of India curiously found the company guilty of misrepresentation, unlicensed operation and polluting the environment.

The apex court had also slammed the plant for operating without requisite permits for a considerable period of time. However, it allowed the company to operate after paying a small fine as it felt India needed the copper. The company has been shut down many a times through court order for violation of environment safeguards in past, since 1998. 15 workers have died and many have been injured due to hazardous working conditions.

It is absolutely unacceptable that a welfare sate chooses to prioritize the interests of a corporate body before its citizens. It is well-established that Vedanta has indulged in numerous violations globally as well as in India.  In one of the worst industrial disasters in the country at Korba, Chhattisgarh, around 100 workers died at Vedanta subsidiary BALCO’s aluminium smelter complex when a chimney under construction collapsed on them in September 2009.

The subsequent judicial inquiry into the incident found Vedanta guilty of negligence and using sub-standard materials and construction methods. Despite the Supreme Court judgement in April 2013 on the rights of Gram Sabhas, Vedanta’s alumina refinery in Lanjigarh village continues to be a major source of pollution in the area, where allegedly 50 million tonnes of toxic red mud is either already buried or is being stacked to be buried in the ground.

The incident in the coastal city of Tuthukoodi rings as an alarm bell for the disasters that are in the making across Tamil Nadu. Farmers, fishers environmental, and citizens’ action groups have also been raising these concerns whether with regard to the Ennore creek and unlawful acts of the  Kamarajar Port, unlicensed operations of ONGC  in Kathiramangalam and the Cauvery Delta region, hydrocarbon exploration in Neduvasal, the illegal and destructive port and Container Terminal at Kanyakumari, substandard remediation of mercury contamination by Unilever in Kodaikanal, unchecked chemical pollution in Mettur, 8 lane Selam-Chennai highway (Green Corridor), land acquisition for Selam airport, Koodankulam nuclear plant etc, just name a few major hotspots.

It is an absolutely unacceptable state of affairs that in the name of protecting the environment, the governments, both the Centre and State, are changing laws to allow real estate companies, multinational corporations and tourism lobbies to take over the coastline and farmlands of Tamil Nadu, displace fisher people, farmers, workers and jeopardize the lives of millions of people exposing them to a rising sea level and a violently changing climate.

In the light of the aforesaid, we demand the following at the earliest:

The Government of Tamil Nadu has lost its ethical right to govern the state and at the bare minimum must ensure the stepping down of senior ministers who could have acted prudently and thwarted this tragedy, but did not.