Report of a civil society fact finding on the death of Rajendra Birhor:

The team first spoke with Rajendra Birhor’s family, neighbours and the Gram Rozgar Sewak. It also tried to speak with the Block Development Officer (BDO) and the Circle Officer (CO) present in the village. It then spoke with the doctor at the Community Health Centre at Mandu. The team also briefly met people of Chitaman Malhar’s community.

Thirty-nine-year-old Rajendra Birhor and his 35-year old wife Shanti Devi have six children: Rekha Kumari (18), Pritiya Kumari (15), Pankaj Kumar (13), Shankar Kumar (11), Ujjwal Kumar (6) and Raja Kumar (2). Till about a year ago, Rajendra Birhor used to drive a tractor. He earned Rs 150-200 a day from this work. His wife earned some money by washing utensils in other people’s houses or cleaning at marriage parties. On an average, she is able to get work for two or three days a week. She is paid about Rs 200-300 for a day’s work. Rekha Kumari dropped out of school in class 5. Pritiya Kumari, Pankaj Kumar, Shankar Kumar and Ujjwal Kumar go to school. Rajendra Birhor’s brother, his wife and four children lived nearby. The two brothers together have 2 acres of land, but it is not used for cultivation as it is located in the upland area with no source of irrigation and fencing.

The wives of Rajendra Birhor and his brother were not members of any self-help groups. According to neighbours, the family had taken loans from local persons. Shanti Devi and her daughter Rekha Kumari said that the family had not taken any loan. The family lives in an unfinished one-room house constructed under Indira Awas Yojana a couple of years back. It owns only basic cooking utensils and does not have any container for storing grains. The room had a clothesline with some tattered clothes on it. 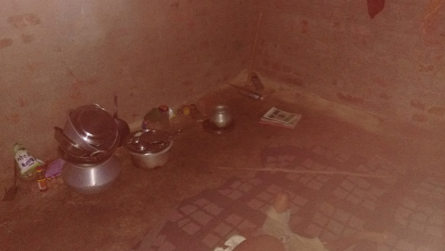 Rajendra Birhor quit work about a year ago due to extreme weakness. He fell seriously ill about a month and a half ago. On 15 June, the mukhiya of the Gram Panchayat took him to the Community Health Centre in an ambulance. He was also accompanied by his younger brother. He was attended by Dr Dharmendra. According to the prescription, Rajendra Birhor was a “known alcoholic” and the colour of his urine was yellowish red. The doctor prescribed blood test, urine test and ultrasound. He was referred to RIMS in Ranchi, but he returned home the same day. According to family members, they were not sure if they would get a place to stay in RIMS. The team tried to talk to Dr Dharmendra on the phone but he refused.

Dr Ashok Ram, the doctor at the Community Health Centre met by the fact finding team, was unable to explain why simple procedures such as blood and urine tests were not conducted at the Community Health Centre or the Sadar hospital at Ramgarh. According to the BDO, Rajendra Birhor had jaundice. But based on the prescription, Dr Ram could not confirm if Rajendra was suffering from jaundice. Dr Ram blamed the local sahiya for not following up on the medical condition of Rajendra Birhor after 15 June. He was unable to tell what proportion of patients are referred to RIMS and how many of them actually go to this hospital.

Rajendra Birhor’s family paid Rs 3,000 to a local doctor for his treatment, for which it had to sell a pig. The family members were unable to tell what illness Rajendra Birhor had. They did not get any medicine from the community health centre. He passed away on 24 July at around 3-4 pm. Shanti Devi was not at home at the time of his death.

In the absence of grain, no food was cooked in Rajendra Birhor’s house on the day of his death. Some food was brought from his brother’s house. Rajendra Birhor’s family’s access to food reduced after he quit his work. Although the family required 3kg of rice a day, over the past year it often had to make do with much less. It usually ate rice with some sabzi such as potato or only with salt. The family bought rice whenever Shanti Devi earned some money. Sometimes, she also brought back food from the places where she worked.

The family did not cook dal regularly and rarely cooked eggs. One neighbour said that he gave some food to Rajendra Birhor’s household about 2-3 days ago.

Rajendra Birhor’s school-going children regularly get midday meal. Eggs are served only once or twice a week, as opposed to the rule of thrice a week.

Some NREGA work took place in the village last year, but Rajendra Birhor’s family last work in the employment guarantee programme in 2010-11. According to his wife, the family did not have a jobcard.

The doctor at the Community Health Centre accepted that due to shortage of doctors, no doctor is permanently posted at the health centre in Chainpur.

On its way back, the fact finding stopped at Malhar Toli of Kundariya Basti. Last month, Chintaman Malhar of this locality died of hunger. It was learnt that no family of this Toli had a ration card. According to members of this locality, the government claims that ration cards have been issued for 14 of the 45 families of the toli. But no family of the toli has received a ration card or its foodgrain entitlement under the National Food Security Act. The families of this toli continue to live in abysmal conditions. Their houses are made of sticks and plastic and there is no convenient source of drinking water. When the BDO was asked about the delay in issuing ration cards to these families, he claimed that they have migrated from other areas and many of them do not have Aadhaar.

The people also complained that after the death of Chitaman Malhar, they were assured houses under PMAY. But the schemes are yet to be sanctioned and the local authorities have started giving excuses.