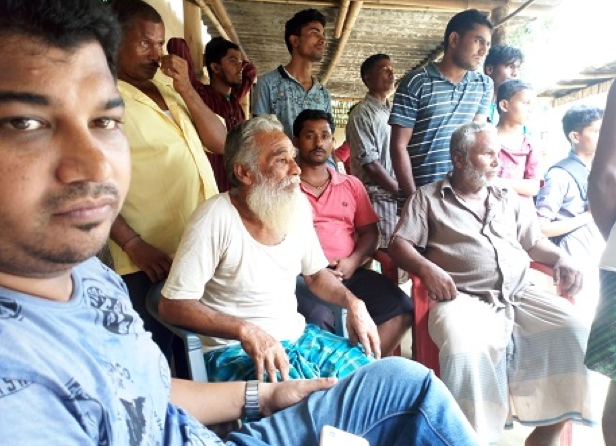 Ziauddin Ali Ahmed, a simple man of about 50 years! He is a marginal farmer. But farming is not sufficient to run his small family of four members. So, he works as seasonal fisherman! Still the poor and simple person, who spends his normal life without any complications commands a quiet respect as landlord from all the villagers of Barkukuria, a village to the interior, in the Kamrup (Rural) District under the Rangia Police Station of Assam. Other than his two sons,  there are no other blood relations in the village, yet this deep respect and affection and cameraderie.

Though the villagers have not paid any ‘tenancy’  to the family of landlords in the last 45 years, Ziauddin has not complained of this before any competent authority. An exceptional member of an exceptional family, none other than Ziauddin Ali Ahmed, nephew of Fakharuddin Ali Ahmed, the fifth President of India. More than even that, he is grandson of Lieutenant Colonnel Jalnur Ali Ahmed, who is the first person to have passed the MBBS degree and qualified as a doctor in Assam.

Despite coming from this lofty background, Ziauddin Ali Ahmed, remained blissfully in the dark until the release of the final draft of the NRC on July 30, 2018. Now his plight is in the limelight, with the national and international media focussing on this ‘story.’ That Ziauddin Ali Ahmed, nephew of the former President of India, Fakharuddin Ali Ahmed and his family members, among 40,07,707 others have been dropped from the draft NRC. The NRC is being updated to facilitate the detention and deportation of, all foreigners from Assam.

When his case came to light, we along with young journalist Nayanjit Kalita, reached the village  and hut of Ziauddin Ali Ahmed on August 1. When we reached his house, all the villagers gathered around and expressed their anguish on how a nephew of a former President of India Fakharuddin Ali Ahmed, one of the most respected person of Assam was dropped from the draft list of NRC?

It appeared unbelievable that a nephew of a former first citizen of India living in such humble conditions, at a time when the son of a prominent politician of the ruling party has increased his personal wealth and property by over 5000 times within a year!

Our quest led us to ask how this had happened. How had, Ziauddin Ali Ahmed, the nephew of a former President of India been dropped from the draft NRC?

Our inquiries revealed that it was due to the absence of Legacy Data, that he couldn’t apply for NRC. We prodded further: inquired about why, other than the Legacy Data, other (alternative) documents like land holdings, School, Board and University Certificates, Birth Certificates, Passport which could have submitted as alternative documents for NRC, were not considered? The reply is shocking, and humbling. The fact that the NRC has not factored this in reveals the flaws in an exercise, expected to be both thorough and fair.

Ziauddin’s reply: In the devastating floods of 1984, all the documents they had, have been washed away. For getting the Legacy Data and some other documents the poor man, along with his son went from pillar to post, across the state. They even searched Delhi and some other places where ever Lieutenant Colonnel Jalnur Ali Ahmed, Fakharuddin Ali Ahmed lived. But they could not find anything about his father!

Meanwhile, in the Cadestral (Land) report of Barkukuria and nearby villages was investigated by us. Here all confusion ends. There is a distinct  noting that the entire land is under the joint ownership of ten Persons. They are 1) Fakharuddin Ali Ahmed, 2)  Jalaluddin Ali Ahmed, 3) Ahtramuddin Ali Ahmed and two other Male and five other Females who are all sons and daughters of Lieutenant Colonnel Jalnur Ali Ahmed. This is a big relief for Jalaluddin Ali Ahmed and his family.   This is in all likelihood a valid document for Ziauddin for the inclusion of his name in the final NRC.

Have they undertaken this procedure? Sajid Ali Ahmed, who is son of Ziauddin Ali Ahmed says. “I have applied for correction of my Father’s Name including the name recorded in the Voters list as my Grandfather two Years back. But the Election Commission has never paid any attention to my application. If we are kept out of the NRC because of this complacency, who will be responsible?”

It is not only the pain of Sajid Ali Ahmed, but hundreds of thousands of people of Assam. For the irresponsible and tardy behaviour of the Election Commission of India (ECI), lakhs of people have been unlawfully declared D Voter and Declared Foreigners!