Excerpts from “India: A Million Mutinies Now” by VS Naipaul, the celebrated Caribbean writer of Indo-Nepalese descent and Nobel Laureate who was born in Trinidad with British citizenship and died in London on August 11 at 85:

Within a day or so of the election result very big painted signboards began to appear in some places in the city with very big portraits of the three heroes of the party. There were no names, no words; you had to know who the heroes were. They were shown in profile, in a staggered line, each profile like a royal head on a coin; and each hero was done in a different colour. The current leader of the party was done in a kind of brown; the man who had led the party to its first election victory in 1967 in a slatey-blue or grey; and the profile behind these two was that of the old, pink-cheeked man with a long wavy beard who had been the prophet of the party.

The prophet was known as ‘Periyar’. It was a Tamil word, meaning a sage or a wise man. I knew the name Periyar, but only just; I knew nothing about the man. I began to learn now, and I was astounded as much by what I learned as by the fact that, with all my reading about the independence movement in India, I had read or registered so little about this prophet of the South.

He was an atheist and a rationalist, and he made two or three speeches a day over a very long life. He ridiculed the Hindu gods. He cruelly mocked caste Hindus, comparing the poverty of their scientific achievements with the achievements of Europe. And then, having it both ways, he also said that the Hindus had copied their gods (‘some selected animals, a few birds, a few trees and creepers, a few mountains and some rivers’) from the gods of ancient Egypt and Greece and Persia and Chaldea.

This was the first surprise: that someone who – at least in the English translation of his often disorganized Tamil discourses – came over as a humorist and a satirist should have been received by the people of Tamil Nadu as a prophet, and at a moment of political triumph so long after his death should have been freshly honoured. But Periyar had never intended humour when he spoke against Hinduism and caste Hindus. He had once been a believer; and he was as obsessed with the religion and its propounders as only a man once a believer could be.

There was a place in Madras called Periyar Thidal. It was on the site of a former bus or tram depot. Periyar himself had bought the place in 1953, for a lakh of rupees, 100,000 rupees, worth then about £7,500. It was the place from which his organization still operated. A garlanded black statue of Periyar stood in the middle of the big sandy plot, with this inscription on the plinth: PERIYAR THE PROPHET OF THE NEW AGE THE SOCRATES OF SOUTH EAST ASIA FATHER OF THE SOCIAL MOVEMENT AND ARCH ENEMY OF IGNORANCE; SUPERSTITIONS; MEANINGLESS CUSTOMS AND BASELESS MANNERS. 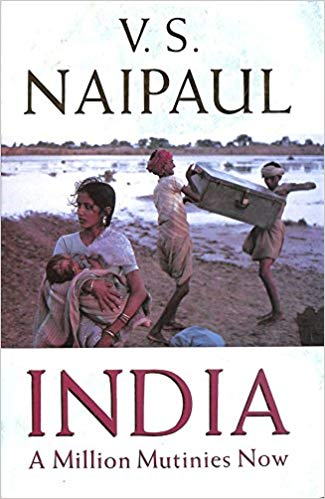 There was importance, too, in the fact of that grave in the Periyar Thidal. Hindus are cremated; Periyar insisted on being buried. He was more than the rationalist: to the people who listened to him and liked what he said, he was the anti-Hindu.

He was born in 1879, 10 years after Gandhi was born, and 10 years before Nehru was born. His political life began in 1919, and continued until his death in 1973. And that was the second big surprise of Periyar: that he should have lived so long, that his career should have for many years run parallel with that of Gandhi, and that Gandhi, through many of the later years of his struggle and search, should have had at his back this figure of the anti-Hindu who finally became the anti-Gandhi, a man whose life and career echoed and reversed much of Gandhi’s own.

Gandhi was a vegetarian. Periyar made a point of eating beef. Gandhi struggled to control the senses. Periyar ate enormous quanties of food, and was enormously fat. One of Periyar’s admirers told me, ‘He was a glutton. ’ And, in this reversal of values, the word was intended as praise. ‘He always had a biriyani – rice and mutton, beef, pork. He was never fussy about food.’ Gandhi was always fussy about his food.

He was different from Gandhi, opposed to him, and yet in some ways – in his discovery of his cause, his working out of ways to serve it, his lifelong adherence to it, and, above all, in his practical business sense – he was like Gandhi. Like Gandhi, Periyar was born into a Hindu merchant caste. Gandhi came from a family of small-scale administrators.

Periyar came from a family of well-to-do merchants. Periyar was not as well educated as Gandhi, and it could be said that he was more devout and traditional. Gandhi went against the principles of his caste and travelled to London to study law. Periyar, in his mid-twenties (while Gandhi was in South Africa, fighting hard battles), went to Banaras, to live the life of a sanyasi, to live naked, on the alms of the devout, in the hope of finding some kind of spiritual illumination.

The illumination never came, and he left Banaras and went back to his family business in his own town. He also went into local municipal politics, and then in 1919, when Gandhi had been back in India for some years, Periyar joined the Indian National Congress. He supported its handloom campaign and took part in the non-cooperation movement.

Then came the break. It had to do with the caste prejudices of the brahmins in the South. Non-brahmins were not allowed free entry to temples. They were absolutely barred from the inner sanctum where the temple deity was; they had to be content with a view from a distance. Sometimes non-brahmins were not even allowed to walk on the lane in front of a temple.

This last prohibition caused an especial commotion in the neighbouring state of Kerala in 1924. Kerala was at that time a princely state, with its own maharaja, and the brahmins of Kerala were even stricter about caste prohibitions than the Tamil brahmins of Madras.

Within the compound of the royal palace there was a temple, and there was also a law court. One day, when a sacred temple fair of some kind was going on, the temple lane was closed to non-brahmins. The temple lane was also the lane to the law court. A lawyer called Madhavan, a non-brahmin, had to appear in a court case that day; but (fame comes to people in unlikely ways) Madhavan was not allowed to walk past the temple.

Some non-brahmins in Kerala protested and started an agitation; they were jailed by the maharaja. They appealed to Periyar. He came to Kerala and campaigned for a whole year, until the temple lane was opened to non-brahmins.

There was another crisis soon after. It was discovered that, at a Congress school for propagating Gandhian thought, brahmin children were fed separately from non-brahmin children. And then it turned out that the school, though run by a brahmin, was being financed by non-brahmins. The matter was reported to Gandhi; but his response was ambiguous and light-hearted.

Periyar at that moment broke with Gandhi and the Congress. (There is a – brahmin – story in Madras that the break really came because Periyar had been asked to account for money connected with the handloom campaign.) In 1925 Periyar founded the Self-Respect Movement, and it was his brilliant idea then to symbolize his cause by wearing a black shirt.

Black-shirted, he campaigned for the rest of his life, for nearly 50 years, against brahminism, caste, Congress, the Hindu religion, the disabilities of women. He established the idea of Self-Respect marriages for non-brahmins, marriages conducted without priests or religious vows. And he preached a crude kind of socialism.