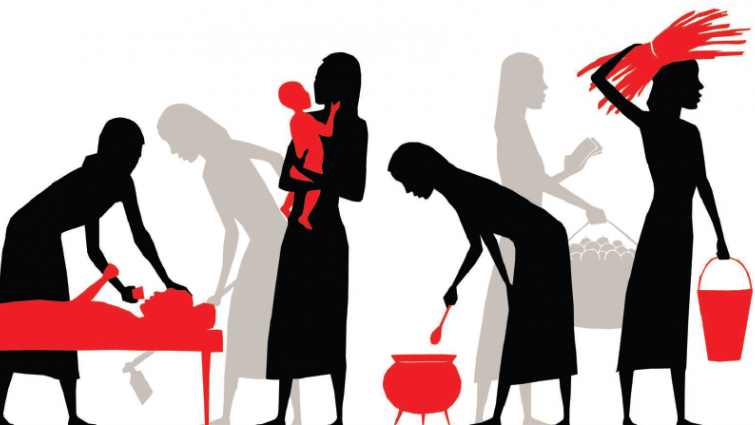 A recent action research, “Invisible Work Invisible Workers: The Sub-Economies of Unpaid Work and Paid Work”, sponsored by UN Women, and anchored by Action Aid India Association, with the help of the Centre for Development Research and Action, seeks to investigate the tangled issue of women’s unpaid work on the basis of interviews with 2,861 respondents from 1560 households (HH), including 259 Female Headed Households (FHH).

The ostensibly intriguing results for Pithoragarh needs to be viewed in the context of both situation and location. Less than one-third of those interviewed reported themselves as working, and that too earning extremely low income. The reasons are several.

One, obviously, the fewer number of employed and self- employed women.

Two, that women in this richly forested area derive sustenance and subsistence for their households from Common Property Resources on which they are heavily dependent, and that the very fact of non-ownership veils the work they do under communal ownership and community rather than private property.

Three, that sale of labour power in the labour market is open and visible, with immediate and tangible rewards even though in the form of extremely low wages. Four, and this is an extremely fascinating form of subversion of exploitation in the open labour market, that of the community exchange of labour outside of the market sphere.

Thus, gender-based division of labour emerges strongly in all sectors of all activities, except in Non-agricultural and Non- construction activities in both rural areas and in Hyderabad where differences exist between FAPR and MAPR. Also, in Pithoragarh, there are no major disparities in the Activity Participation Ratio of males and females in forestry and fishing.

Importantly, variations emerge in the Activity Participation Ratio of female workers in Female Headed Households and of women in General Households. In Solapur, the former ratio is lower for most economic activities. However, the APR of women workers from Female Headed Households is higher for Travel and Waiting Time for Economic Activity where a greater percentage are associated with grazing and take longer hours to reach the grazing lands. Their APR is much higher for Household Processing and Repair, Household Management and Maintenance, Travel & Waiting Time for Energy, Travel and Waiting Time for Water, crossing the 90 percent threshold in most of these activities in Solapur.

The Activity Participation Ratio of the female worker in Pithoragarh in Female House Holds (FHH) is either lower or comparable to their general household counterparts in most activities except in Non-Agricultural and Non-Construction earning activities where substantial number of women participate as casual workers. An evaluation of the APR in the urban areas reveals major differences between these two regions. In Hyderabad, the Activity Participation Ratio of female workers from FHH is much higher than their cohorts in general households.

On the other hand, in Thane considerable equivalence can be observed in the APR in all economic activities; it is lower for Household Processing and Repair, Travel and Waiting Time for Water and in Public Provisioning, while it is higher in Household Maintenance and Management and Energy. Among the most significant difference that has fundamental policy implications is the lower intensity rate of female workers from FHH in the Care activity in Solapur, Pithoragarh and Thane. The lowest is in Solapur at not even 21 percent, the other areas reporting more than double but still less than that in General Households.

On an average, male and female workers in a given region spend almost similar amounts of time on an activity. Yet, gender gaps in activity participation rates cut across all categories of activities. Further, men and women spend almost 60 percent or even more of their time on economic activity; and if the extended definition of economic activity is used to include household processing and repair in order to compare with activities specified as economic activities under the System of National Accounts (SNA), then the time spent on this category of work rises to 70 percent and above.

The above needs to be perceived in the context of the fact that multiplicity and simultaneity dominate the pattern of women’s work, unpaid, care, and even paid. Additionally, women are engaged in a wide range of sub-activities under every major category; men participate in fewer activities especially under care and household work but they spend longer hours on those activities: consequently, the average hours spent for men and women tend to be similar.

Also, the intensity of participation is not very high among males. For instance, although they do undertake some responsibility for the tasks that constitute the household management and maintenance, their numbers are much less as compared to female respondents. Differences also exist between the intensity of participation of the urban and the rural male, the former engaged in a wider range of activities and at times spending as much time as the urban female worker.