State power deliberately undermines people’s movements that get their strength from the collective — collective conviction, collective determination, collective voices, and collective resistance. Mass resistance and people’s struggles do not need foreign funds or guns. One of the most powerful people’s movements of independent India, the NBA, runs the movement from simple karyalayas (offices). The karyalayas also functioned as homes to the activists of the movement and its people. All the NBA offices were absolutely simple, many had no running water, those in the Adivasi area had no electricity. There were no cots or mattresses or chairs and tables. Activists slept on the daries and cooked simple food. It was only later that three offices had second hand computers and working tables.

It is from these modest offices that the NBA coordinated/coordinates its non-violent struggle in the Narmada Valley to fight the destructive dams on the River Narmada, pushed by the authoritarian State. It is from here that the NBA fought against  powerful international institutions and brought the World Bank to its knees.  Some of the karyalayas continue to function even after several decades of resistance while there are others that may not be functional today but their stories remain alive.

The first karyalaya of the Narmada Ghati Navnirman Samiti (NGNS) functioned from a Gandhi Asharam/School at Tavlai in Manawar district in Madhya Pradesh (MP), not far from the River Narmada. This office to challenge the large dams on the River Narmada was established by veteran Gandhians and freedom fighters like late Kashinathji Trivedi, late Baijnath Mahoday, Prabhakar Mandlikji, etc. They were joined in their efforts by local farmers and social activists like late Fulchandbhai Patel who donated his land for the Tavlai Ashram, late Shobharambhai Jat, late Ambarambhai Mukati, late  Surajmalji Lunkad and many others.

Later, as the NBA grew and the number of full time activists increased, the NGNS up-karyalaya (sub-office) in Badwani, MP, came up. Although it became one of the main offices of the NBA it continued to be called NGNS up-karayalaya. This karyalaya (below) was given to the NBA by a farmer Badribhai Jat of village Bagud, one of the 245 submergence villages of SSP. Badribhai never charged any rent for the several years that NBA functioned out of this office.

Later, as the office above needed renovations, one of the senior members of NBA and respected resident of Badwani, late Mahajansaab Vakil, gave his premises to be used as NBA karyalaya. It is here that NBA functioned for over two decades.

When late respected Baba Amte decided to shift from Anandwan to the village Choti Kasravad on the banks of the River Narmada near Badwani, his small house was built by the people of the Narmada valley with contributions from the town of Badwani. The three room house was named Nijbal, where Baba lived for over a decade with Sadhana Tai opposing the SSP. After Baba returned to Anandwan due to his and Sadhanatai’s failing health and advancing age, the premises which had been by then turned green with trees grown by Baba and his team, was managed by senior activist of the NBA Rehmat and late Gangarambhai Yadav. However the State would not have it and sealed the premises forcefully against people’s resistance. Nijbal which was once the center of resistance against SSP and other large dams in the Narmada valley, lies in dilapidated condition today.

The legendary karyalaya of NBA named Narmada Aai, in the renowned village of Manibeli, the first Adivasi village in the submergence zone of the SSP in Maharashtra was the center of the struggle for several years in the 1990s. It is here that the Morse commission appointed by the World Bank to review SSP had its first meeting with the NBA. The people’s struggle of and at Manibeli became so well known worldwide that in recognition, a call by organizations from across the world for moratorium on funding by World Bank to large dams was named ‘Manibeli Declaration’. It was Manibeli Declaration that was finally instrumental in the setting up of the World Commission on Dams (click HERE and HERE).

When the Government of Maharashtra raised to the ground Narmada Aai with the aid of police, it was once again built through the popular practice of collective labor among the Adivasis called Laha.

Narmada Aai would not have functioned without late Gangarambhai  Yadav (in the center in the photo above belonging to submergence village Chottabadda) giving his full time to its management and looking after hundreds of visitors every month. There were other activists who helped him. To the right, standing in the photo above is Gendalal Mujalde  – one among the many full time activists of NBA (submergence village Kundiya). In the front is one of the many international students and researchers who visited the NBA, Layla Mehta. She is now a research fellow at IDS, University of Sussex, UK. The others are Project Affected People from different villages in the Narmada Valley and members of the NBA.

Illegal submergence as a result of the increase in the height of the Sardar Sarovar dam without rehabilitation of the people, finally drowned Narmada Aai in the mid nineties.

The NBA karyalaya at Baroda was also one of the main centers of the struggle. Initially the Vadodara Kamdar Union (VKU) hosted NBA for several years and the NBA office ran from the VKU premises. But as NBA in Gujarat grew/spread, and the number of full time activists working in Gujarat grew, it shifted to its own (rented) office space (photo below). This was also because large number of people from the submergence villages came to the Baroda office for medical treatment. Besides, Baroda Karyalaya became the center connecting the NBA to the rest of the World.

It was only when this office was attacked and ransacked by goons of both the BJP and the Congress, that NBA had no choice but to get its own karyalaya as it was difficult to get any place on rent due to the fear of owners that they would be harassed by the state and other goons. Of course VKU, Swashraya, and other supporters’ offices were open to the NBA 24X7.  NBA supporters like Rameshbhai Kacholia, Vijayatai Chauhan, late  Kamalakar Dharmadhikary and late K.K.Oza came together and helped financially for the purchase of the NBA office in Baroda (below):

NBA had its Karyalaya in village Kevadia,  a SSP colony affected village at the house of the senior Adivasi leader of the NBA Muljibhai Tadvi. Muljibhai had lost his land to the construction of Kevadia Colony in Gujarat. It is here that full time activists like late Tetabhai Vasave, etc worked and lived. Later, NBA had its karyalaya in the Adivasi village  Kothi at the home of the firebrand leader of the NBA late Baliben Tadvi who also had lost her land to the project colony. It is in these simple mud and tile houses that NBA functioned from for many years in Gujarat.

After the passing away of Baliben, the NBA karyalaya functioned from the house of senior leaders of NBA Prabhubhai Tadvi and Kapilaben Tadvi at village Waghadia also a colony affected village near the dam site.

Then, NBA had its Karayalayas in the submergence villages of Jalsindhi and Domkhedi situated in the Adivasi villages of Madhya Pradesh and Maharashtra. These were built by the people through the practice of Laha. The illegal submergence due to SSP drowned these karyalayas.

As the NBA case in the Supreme Court of India went on for several years in Delhi, Delhi Forum shared its office (below) in solidarity with the NBA activists who lived and worked from its premises for several years in the nineties till the majority judgment of the SC allowed the work of the dam to proceed. 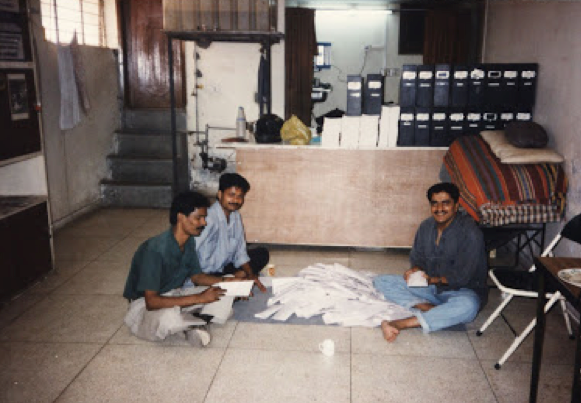 In the photo above in Delhi Forum (DF) office where the NBA functioned, one of the finest activists that the country can have, Ashokbhai Sharma who has been supporting tirelessly peoples’ movements across the country when they come knocking at the doors of the many power centers in the Capital City.

NBA also had its full fledged office in the premises offered by its supporters in Mumbai for several years in the nineties, that was run by full time senior activists including well known feminist writer and scholar Lata Prama.

NBA has one of its longest running karyalayas in Dhadgao, Maharashtra. Unfortunately I do not have its photo in my collection. Currently NBA has its own office in Badwani built on land again donated by a local resident. NBA set up simplekaryalayas in Mandleshwar and Khandwa,  to fight the other large dams on the River Narmada and also in the Bargi area. Again I do not have the photos in my collection.  The list here is of course not exhaustive.

The power of the movements of the marginalized and the exploited communities across the country comes from the collective resistance based on truth, conviction and determination. It is the State that has the arms and the jails and the infinite resources at its disposal – domestic, corporate and international to curb any dissent as well as people’s struggles for justice and equity. The sooner this is accepted, the better.