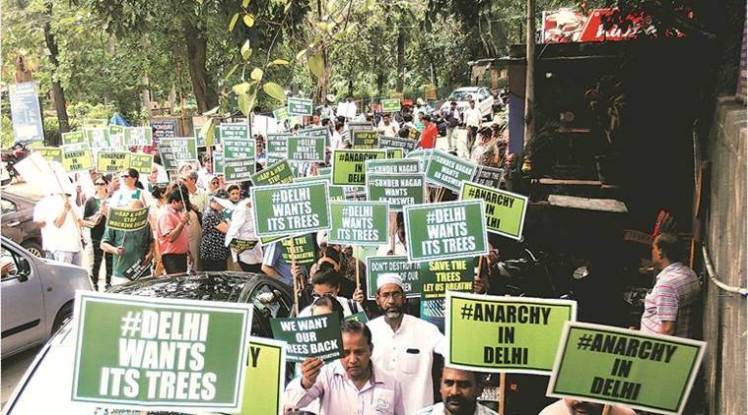 By Manju Menon and Kanchi Kohli*

The housing and urban affairs (MoHUA) ministry’s proposed construction of massive commercial complexes and government housing in seven colonies of south Delhi has been tied up in a legal challenge due to a case filed by a Delhi-based orthopedic surgeon. The badly designed project will add to the city’s environmental problems. In this case, the Delhi High Court passed an order on October 3, 2018. The court order that was made public four days later reveals that the ministry has made several claims to the court even though these stand demolished in the ongoing public debates.

This is a worrying moment for the people of Delhi who read scary news reports every day about the climate and environmental crises both at global and local levels, but the government uses the same old delegitimised rhetoric to justify its projects. A case of “alternative facts”? By asking the ministry to seek fresh approvals “in accordance with law”, the High Court order has, in effect, quashed permissions for all but one of the seven colonies that are part of the redevelopment project. This was absolutely necessary to uphold the law as these approvals were obtained through inadequate assessment procedures, absurdly misleading data and faulty EIAs. For the seventh, i.e the Nauroji Nagar World Trade Centre, the court will hear the matter next month.

However, even though the court and the ministry’s counsel have agreed that the project has been redesigned, there is no evidence of this in the court papers or elsewhere. Given that MoHUA has convinced the court about having “reapplied their mind and reviewed the proposal”, it is disconcerting the ministry will not make this plan public. For a government that has waxed eloquent about transparency in several high profile matters from Aadhaar to data protection, why can’t citizens be shown the layout and design plans of a “government housing project”?

The HC order extensively quotes from the MoHUA’s affidavit to say that there have been changes in the architectural design, conceptual plan, realignment of towers and creation of an additional underground parking for cars. It repeats that trees, which cannot be protected on site, will either be transplanted or compensated for. But these are failed experiments, not solutions, as has been shown over and over again. According to a June 2018 news report in a national daily, an official of the Delhi Forest Department argued against transplantation to say that it is very expensive and more important an impossible option for a tree beyond a girth of 80 cm, as it has huge roots. He adds that “If the roots are trimmed, the tree doesn’t survive”. Back in July 2018, the Delhi High Court had itself asked for an explanation from the ministry on “how equivalence is drawn between a fully grown tree and a sapling”.

On the issue of increased traffic that these projects will cause, the ministry stated that road restructuring, seamless connectivity, integration of public transport “are being taken into consideration”. Their response shows the vague thinking given to everyday aspects of urban life like mobility that can be completely disrupted by these projects.

The ministry has maintained a silence on whether they have obtained a certified report by the NDMC and Delhi Jal Board (DJB) on sources of fresh water required for the six colonies. This permission was a prerequisite for starting construction activity for all seven colonies. The new DDA vice chairman recently said that the authority will proceed with new housing schemes only when the water crisis is averted. Yet the ministry has assumed that fresh water is readily available for the redevelopment schemes, and the shortages would have no bearing on their plans.

Discarding trusteeship: Citizens from different parts of NCR and other cities have been protesting against this and several other proposed construction projects on the grounds that the Urban Development Ministry has abused its trusteeship role of public lands and social and environmental obligations to the health and well-being of all citizens. There are nearly a dozen such projects proposed for Delhi alone.

It is very telling that the redesign done by the ministry under pressure from this case has not reduced the huge commercial component of the construction at all. The redesigned plan still means that these public lands will transform into nearly 25 million square feet of prime value real estate and underground parking for over 1 lakh cars. The redesign has only reduced the number of “government housing”, which was already insubstantial when compared to its commercial component. The ministry continues to make citizens and the court believe that the building of 24,928 government houses is the primary reason for all this construction.

Will this fig leaf blind the court and regulatory authorities from seeing the immense impacts that lie behind Delhi’s redevelopment project?

This article was first published here