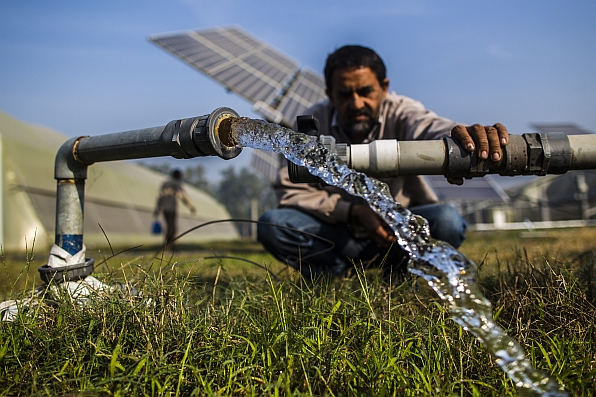 The plains of the Ganga-Brahmaputra-Meghna (GBM) basin, encompassing Bangladesh, Nepal terai and eastern India, are home to a quarter of the world’s rural poor. The basin’s copious aquifers are the biggest hope for millions of smallholders locked into unviable agriculture. Studies suggest shallow groundwater wells can support 2.5 crops/year in much of the basin without threat of depletion. Yet, cropping intensities hover around 1.2-1.5 in most parts. Rapid expansion in shallow tubewell irrigation has begun to show productivity improvement for tubewell owners, but the marginal farmers and tenants remain in a disadvantageous position in this tubewell irrigation economy.

The poor need a better deal in irrigation service markets

Two factors limit benefits to the poor. First, extreme land fragmentation makes it uneconomic for marginal farmers to own tubewells and irrigate all their dispersed plots. Marginal farmers and tenants thus depend on buying irrigation service from diesel tubewell owners. Second, water buyers pay a third or more of their irrigated crop output to diesel pumps owners as irrigation service charges due to the high cost of diesel. GBM’s water markets transfer wealth from resource poor water buyers to tubewell owners.

Governments are aware of this inequity but are unfamiliar with the dynamic of water markets and how to make them pro-poor. Attempts to subsidize diesel for irrigation in Bihar and Bangladesh have been frustrated by leakages. Farm electrification is costly and time consuming. The arrival of solar pumps has opened up a new and attractive possibility. But since solar panels are costly (US $ 1500-2000/kWp), most GBM governments are subsidizing small 1-2 kWp solar pumps to reach as many smallholders as limited budgets permit.

IWMI studies have shown that targeting 1-2 kWp solar pumps to small farmers is sub-optimal. Instead, they should be used to make village-level informal water markets pro-poor. In doing this, small solar pumps are not much help. A 1-2 kWp solar pump can irrigate a plot where panels are laid. It operates at full power 3-4 hours daily and pumps little water in morning and evening. Its yield plummets during summer when water tables recede. Most solar farmers IWMI surveyed used solar pumps as standby but relied on larger diesel or electric pumps as their mainstay for irrigation.

Many use electric pumps to lift groundwater into a farm pond and then use solar pump to lift water from the pond. Small solar pumps deliver limited power to push water in pipes to distant fields and are therefore little use for selling irrigation service. In addition, solar pump subsidies are generally captured by large influential farmers. NGO’s have tried to resolve some of these issues by experimenting with cart-mounted mobile panels and by promoting group-ownership of solar pumps. But this is patchwork. A more comprehensive strategy is needed to extend the benefits of solar pumps to the poor.

(a) Saving of diesel consumption

(b) Irrigation services to water buyers

Solar entrepreneurs have run their pump for roughly 13,000 hours, of which more than 96% is sold to water buyers. From sale of irrigation service, the S-ISPs have earned around Rs 12.6 (US$ 18,000) lakhs till October 18. If they would have had sold the same number of hours of irrigation using diesel pumps, they would have had earned close to Rs 7.7 lakh (US$ 11,000). For meeting their own irrigation requirements, the S-ISPs used 467 hours of solar pump operations; in the process, they saved Rs 0.6 lakhs. The average operating hours of S-ISPs have been 1,147 hours over the past 12 months.

The approach outlined here is specifically tailor-made for Ganga-Brahmaputra-Meghana basin states which have abundant groundwater resources, copious aquifers and an agrarian economy that has come to heavily depend on shallow tubewell irrigation. The option is ideal for smallholder fragmented farms which face high risk of crop loss from monsoon flooding and are unable to irrigate in winter and summer due to high energy costs.

In ITP’s assessment, it is feasible under the present option to add an additional million hectare of high quality, affordable, solar pump irrigated area with a total outlay of US$750 million. Of this, S-ISP’s can contribute up to 50 per cent, provided an attractive loan product is devised for them. Thus, with this option, the irrigated area in Bihar can be doubled with a total outlay of close to US$750 million.

The advantage of this option is its ease of implementation. All that is needed are four changes in the design of current programs: (a) divert funds from current allocations to public irrigation, groundwater irrigation, electricity subsidies to the proposed option: (b) target solar pumps to villages instead of farmers; (c) instead of 1-3 kWp solar pumps at 90 per cent subsidy, offer 5-7 kWp solar pumps along with 1,000-2,500 feet of buried pipe distribution system at 50 per cent subsidy; and (d) involve a financial institution to offer a low-interest loan to S-ISPs to repay their share of the capital cost over 5 years in annual instalments.

Key co-benefits that will accrue are: (a) quickly expand quality irrigation to the poor at affordable cost: (b) create full-time livelihoods for 6-15 young S-ISPs per village; (c) curtail carbon-footprint of irrigation; and (d) reduce surface flooding by curtailing rejected recharge.