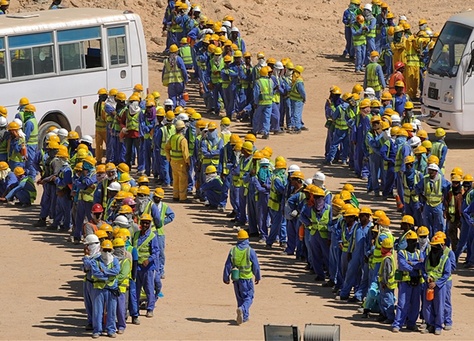 Readers may remember my email alert sent during the first week in November, 2018, containing statistics of the number of Indian Workers who died in six Gulf Countries since 2012. Using the data that I obtained from the Indian Embassies situated in Bahrain, Kuwait, Oman, Qatar, Saudi Arabia, I had pointed out that 24,570 Indian Workers had died between 2012-2018. The Indian Embassy in the United Arab Emirates did not send any data even after I filed a first appeal.

A quick calculation had revealed that on an average more than 10 Indians had died every day. I had also showed that Indian Workers in the six Gulf countries had sent more than US$ 209 Billion in the form of remittances. When compared with the deaths data, this worked out to more than 117 deaths for every US$1 Billion remitted to India during this period. Please click here for the RTI queries and the responses I received from the Indian Embassies.

Thanks to the widespread print and digital coverage of these findings, the story caught to the attention more than one member of Parliament and civil society advocates who engage with them. Two Members have raised questions in the Lok Sabha (Lower House) during the ongoing Winter Session. Please click here for the reply that the Government of India has tabled in Parliament on 12th December, 2018. The Central Government’s reply is bewildering for more than one reason.

Central Government’s flip-flop in Parliament on the issue

Reacting to the findings contained in my previous email alert, civil society actors seem to have brought the death-related figures to the attention of some MPs. Mr. Malyadri Sriram, MP (Telugu Desam Party-Bapatla, Andhra Pradesh) and Dr. Dharam Vira Gandhi, MP (Aam Aadmi Party- Patiala, Punjab) asked the Government of India whether deaths of Indian Workers in Gulf Countries were occurring at an alarming rate and what steps were being taken for safeguarding them.

On 12th December 2018, the Union Minister of State for External Affairs Gen.(retd) Dr. V. K. Singh bluntly stated that the Embassies do not maintain data about deaths of Indian Workers as a category. Instead he provided information regarding the deaths of “Indian Nationals” during the period 2014-2018. Some segments of the media also reported on this data without cross-checking the Minister’s statement with previous replies tabled in Parliament on the same subject.

For example, in July 2016, his erstwhile colleague in the same Ministry, Mr. M J Akbar, tabled data about deaths of “Indian Workers”  (and not “Indian Nationals”) in 96 countries across the globe in response to questions raised by four Lok Sabha MPs. This includes data from six Gulf countries which were covered by my RTI intervention. The data tabled in the Lok Sabha on 12th December, 2018, matches with some of the country-specific information I received under RTI. Which of the Government’s replies is correct is now a big mystery, like the ongoing controversy over India’s GDP figures.

According to the the data tabled in Parliament on the 12th of December, 2018, a total of 28,523 Indians Nationals died in the six Gulf countries between 2014-2018. The data that I obtained under RTI from the Indian Embassies or from their website or what was tabled in Parliament in July, 2016 for the same period, accounts for only 17,827 deaths. So the figures revealed in Parliament are 37% higher than what I circulated in November 2018.

When the overall death figures for the shorter period of 2014-2017 are compared with the volume of remittances from these Gulf countries, the deaths per US$ Billion figures increase beyond the figures I calculated in November 2018. Overall, there were more than 155 deaths of Indian Workers for every US$ Billion remitted from the Gulf countries during this period.

Click here to read my revised findings about the death rates and deaths per US$ Billion remitted to India between 2014-18 based on the latest data that the Government tabled in Parliament.

1) that compiling a detailed list of persons who died in Qatar including cause of death “would disproportionately divert the resources of the Embassy”;

2) that even if such a list were compiled, “making it public would not serve any larger public interest”;

3) that the CPIO has correctly invoked individual privacy [information exempted under Section 8(1)(j) of the RTI Act] and there is no overriding public interest in sharing detailed information about deceased individuals; and

4) that merely by looking at the printout supplied by me, the FAA presumed that the Embassy of Kuwait had stopped publishing detailed information about deaths since 2018.

What are the fallacies in the FAA’s order?

I believe the FAA’s order is terribly flawed and reveals a complete lack of care and compassion for Indians working in Qatar because:

1) while Indian Workers slogging it out in Qatar are welcome to fatten India’s coffers by sending billions of dollars in remittances (Qatar accounted for US$ 16.26 Billion in remittances between 2014-17, according to World Bank Estimates), the Government does not want to spend more resources on collecting detailed data about their deaths!

Compare this with the figure of US$ 8 Billion estimated in the media as the cost of the deal to buy 36 Rafale fighter aircraft from Dassault Co. in France. The Government has stubbornly refused to divulge the monetary value of the deal citing national security. However if the US$8 Billion figure is closer to the official figures, Indian Workers in Qatar sent more than double that figure as remittances in just four years;

2) while remittance data can be made public (in replies to Questions raised in Parliament or when the World Bank seeks data for its Annual Migration Reports) there will be no public interest in disclosing death-related data even if it were compiled. So, their earnings have a relation to public interest but their deaths do not, the FAA seems to think. In other words, while the Government seems to say: “we will count their money and make them pay taxes”, the Embassy seems to say: “we will not count their deaths and even if we do we will not tell you how many!”;

3) worst of all, the FAA does not seem to have lifted a finger to click the mouse button to ascertain the status of deaths data availability on the website of the Indian Embassy in Kuwait. In fact, data about deaths of Indians including name, age, gender, cause of death and arrangements made for disposing of the mortal remains continue to be updated every month on their website. Click here for detailed information about individuals who died in Kuwait as of December 2018. The FAA of the Indian Embassy on Qatar is not only oblivious of the good practice followed by his colleagues in Kuwait, but also refused to make the effort to find out the truth for himself despite my claims.

However, the FAA of the Indian Embassy in Qatar does not deny that the annual death figures provided by the CPIO are of “Indian Workers”. His entire order is about how details of deaths of Workers cannot be collected separately or made public even if it were collected. Surprisingly, this stance of the FAA is at variance with the reply given by the Union Minister of State for External Affairs Gen.(retd) Dr. V. K. Singh in Parliament on the 12th of December, 2018. Even worse, eighteen months ago, in May 2016, in response to Unstarred Question #1636 raised in the Lok Sabha, the Minister had admitted that the number of deaths of Indian Workers is reported from time to time by the Indian Missions abroad. So if such deaths data is being reported, why can it not be compiled and made public?

The Central Government has explained multiple times in Parliament about the steps it has taken to provide assistance to Indian Workers abroad, particularly those living in Gulf Countries. These are to be appreciated indeed. However, given the large number of deaths being reported from the six Gulf countries year after year, it is important that the Government take the necessary steps to record detailed data about deaths of Indian Workers to start with and later collect similar data about Indian Workers dying in other countries.The good practice observed by the Indian embassy in Kuwait must become the standard for other Indian Missions abroad. This is the first step towards developing any policy prescription to reduce the number of deaths of Indian Workers in the Gulf countries.