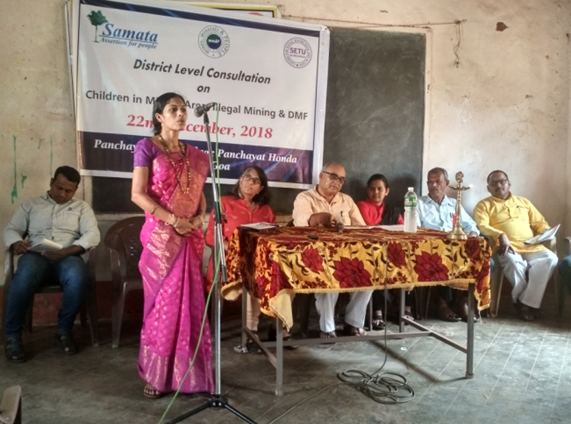 There were discussions on the overview of mining throughout the country, various stages of mining, illegal mining, Samata Judgement, situation of children in the mining areas and consequences on their education, health affected due to air and water pollution, malnutrition issues etc., and the need for lobbying   National Level regarding Child Rights as they are being violated.

There were discussions on the situation of children in mining areas and it was said that “mining children are nobody’s children and are falling through the cracks” as they are mostly ignored by all the concerned child welfare departments, govt. authorities unaware of the mining children’s inclusion in the respective departments. There is a confusion and lack of clarity as in which department the children in the mining areas should be included and what basic facilities and amenities should be provided to them. 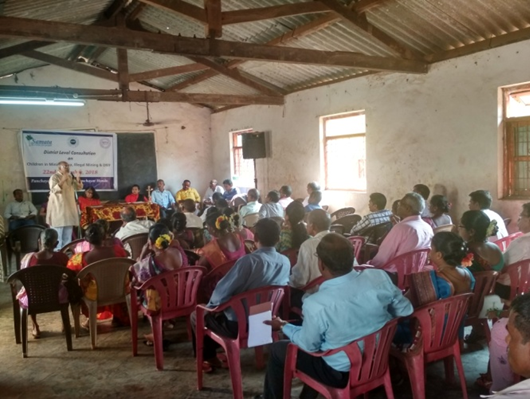 The community people of Sonshi shared that around 70 children of the village and the surrounding villages are struck in their homes and unable to go to school as mining companies after the mining operations came to a standstill following a Supreme Court order, stopped providing the children transport and the roads are inaccessible due to mining dumps placed near the villages. Secretary General of mm&P Ashok Shrimali said that “this is violation of the Right to Education Act and it is the state government’s responsibility to provide free transport for school.”

There were elaborative discussions on District Mineral Fund (DMF), its formation, implementation in all the states and lack of public awareness on the functioning of the DMF. It was found that people are unaware of the DMF which is meant to be utilized for the betterment of the mining affected communities and the funds collected are to be utilized to provide basic amenities like drinking water, sanitation, education, health and environmental conservation and preservation. It was also noticed that there was no community participation of the mining affected communities at the planning, formulation and implementation stage.

Shrimali stated that as per the information available, Goa has about Rs. 186 crore under DMF of which Rs. 10 crore has been utilized. However the ground reality is that due to mismanagement of funds, the amount spent has not benefitted the mining affected communities.

Executive Council Member of mm&P, Goa Ravindra Velip, said that no district has developed a comprehensive DMF plan to ensure need- based investments in mining affected areas. He alleged that while the role of gram sabhas and panchayats are sidelined, no beneficiaries are identified under the scheme.