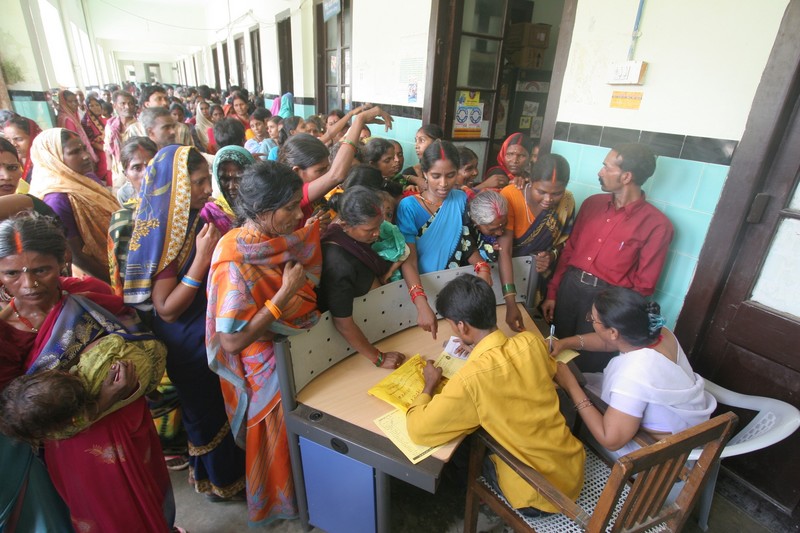 The Indian economy has made rapid strides in recent year but its abysmal health system remains an Achilles heel and has impeded millions of people from sharing the gains of India’s new prosperity. India has a laggardly record in its healthcare coverage. In per capita terms, adjusted for purchasing power, the public expenditure on health is $43 a year, compared to $85 in Sri Lanka, $240 in China and $265 in Thailand.

European Nations spend ten times more and the United States spends twenty times. According to the Insurance Regulatory and Development Authority (IRDA), the Indian Government’s contribution to health insurance stands at roughly 32 percent, as opposed to 83.5 percent in the United Kingdom. India’s high rate of out-of-pocket expenses for health stems from the fact that 76 percent of Indians do not have any health insurance.

The country has a similarly low ranking on several important health indices. The dwindling budget allocation for public health care in one of the fastest-growing populations of the world starkly reflects the misplaced priorities of the Indian government. These are all really depressing statistics but this year’s budget and health-related policy reforms is some good news.

Poverty and ill-health are, indeed two sides of the same coin. An effective healthcare system is a powerful antidote against poverty. Families from the ‘vulnerable sections of the society’ struggle to pay for   healthcare and are likely to fall into the never-ending trap of poverty. This coupled with the lack of basic health infrastructure in rural and remote areas aggravates the health conditions of the poor, leaving them in a perpetual state of poverty.

In a major step towards providing universal health coverage, the government announced a National Health Protection Scheme, popular as Modicare, covering ten crore poor and vulnerable families, which is around 50 crore people – about 40 percent of the population. The healthcare plan would offer up to 500,000 rupees or about $7,860 of coverage per family each year. The move is revolutionary as most people have no health insurance. The healthcare trajectory that Modicare is plotting is to free people from the worry of medical costs.

In recent years, the government has also capped prices of critical drugs and medical devices and increased health funding. Several studies have demonstrated  how societal factors—caste, gender, sexuality and other marginalizing social tradition —shape not just the occurrence of diseases, but also the access to care. The cry for universal health is a cry for social justice and not just a fight for health rights.  TB has now at least gone from being a death sentence to a manageable illness. The government has been building awareness of malaria by popularising blood tests wherever any one has fever. Similarly, polio has now been virtually eliminated. Mosquito nets and repellents are being liberally used even in remote villages.

Comprehensive health care, including for non-communicable diseases and maternal and child health services, and free essential drugs and diagnostic services, are to be provided at health centres. These two plans are part of the ‘Ayushman Bharat’ scheme to address health holistically, in the primary, secondary and tertiary care systems. The plan would require an estimated 110 billion rupees ($1.7 billion) in central and state funding each year. The government estimates the cost of insuring each family under the new scheme at about 1,100 rupees ($17.15). The government could also partly use the funds raised from a newly imposed one percent health cess on taxable incomes, and the health scheme would also benefit from the planned merger of three state-run insurance firms announced.

The government’s health policy does little to prevent poor health in the first place. Unsafe water, poor sanitation, malnutrition, and lack of proper housing undermine health which is partially eclipsing the achievements of government’s interventions for alleviating poverty. Poor people are dying from diarrhoea, pneumonia, under-nutrition, malaria tuberculosis and this is the result of poor hygiene and sanitation. Preventive and curative services need to go together.

Experience shows that health programmes pay enormous economic dividends. Good quality and affordable health care is the foundation for individuals to lead productive and fulfilling lives and for countries to have strong economies. For every dollar invested in childhood immunization, developing countries realize $44 in economic benefits. But funding is not the only difficulty, says Jean Drèze. “There are issues of management, corruption, accountability, and ethics and so on. The main problem is healthcare is way down the political agenda.”

India’s low levels of insurance penetration are a potential damper on its growth, with as many as 70 million people slipping into poverty each year due to sickness.  According to the ‘India State-level Disease Burden Report and Technical Paper’, there has been a massive increase in disease burden on account of non-communicable diseases. It also showed a Disability Adjusted Life Years (DALY) rate increase from 1990 to 2016 for diabetes at 80 percent, and ischemic heart disease at 34 percent. DALY measures years of healthy life lost due to premature death and suffering. The average Indian’s life expectancy is about 68 years which definitely shows some improvement as compared with the past, but globally the progress is still dismal.

According to WHO’s findings last year the density of doctors at the national level was 79.7 per 100,000 population. This is very poor in order to accommodate the needs of 1.3 billion Indians. In an attempt to find relief from misery and pain, patients are left with little alternative than to turn to the  private sector which comprises both legally trained and illegal doctors ,with quacks abounding in huge numbers in remote rural areas. People perceive that quality is better at informal providers even though the latter often mishandle common ailments .Private health care providers are  rapacious and  notorious for  shoddy treatment  ;they provide  kickbacks for irrational drug prescribing   referrals, and unnecessary  pathological tests and treatments.

The   infrastructure for  delivering primary health care has a three tier system with Sub Centers, (SCs) Primary Health Centers (PHCs) and Community Health Centers (CHCs) spread across rural and semi urban areas. The tertiary care comprising multi-specialty hospitals and medical colleges are located almost exclusively in urban regions. Sub-centre is the first contact point between the community and the primary health care system T. it provide spublic health services such as immunization, curative care for minor ailments and   is responsible for tasks relating to maternal and child health, nutrition, immunization, diarrhea control and communicable diseases  . It employs one male and one female health worker, with the latter being an auxiliary nurse midwife (ANM). The only redeeming feature turns out to be the committed cadre of Auxiliary Nurse Midwife, ANM, at PHCs and their sub-centres along with Accredited Social Health Activists, ASHAs – the frontline health workers.

PHCs serve as referral units for six SCs and have a qualified doctor and four to six beds. CHCs serve as referral units for four PHCs. Each CHC has four specialists — one each of physician, surgeon, gynaecologist and paediatrician — supported by 21 paramedical and other staff members. It has 30 indoor beds, one operation theatre, X-ray and labour rooms and laboratory facilities. It provides emergency obstetrics care and specialist consultation.

Population norms per centre for the plains are 5,000 for SCs, 30,000 for PHCs and 1,20,000 for CHCs.  There are 1,56,000 SCs, 25,650 PHCs and 5,624 CHCs as per the Rural Health Statistics, 2017. The system is well designed and should normally deliver good services. However, due to a shortage of resources, the SCs, PHCs and CHCs have had less than adequate infrastructure, overworked staff and inadequate incentives for the staff.

It ought to be strengthened with public investment by supplementing their services from the private sector with a contractual mechanism that reviews the performance periodically.There are around 734 district hospitals across the countries which provide secondary health care. Additionally, there are around 300 other women’s hospitals at the district level which are powerful nodes in India’s healthcare network and can be revitalized to boost the health infrastructure.

The apathy of the government is reflected in a rather poor prognosis for the health system. Primary Health Centres (PHC) in villages are supposed to screen and feed medical cases to specialized hospitals in districts and further on to state-level specialized hospitals, but PHCs do not exist in many villages, only about one for every twenty villages, and wherever present, they are so overstretched  that the “access” system is broken at the first mile. India also needs to reform the governance of public healthcare. There must be a transparent and seamless ‘continuum of care’ across the spectrum from village to sub-health centre, primary health care, sub-district hospital and the district hospitals.