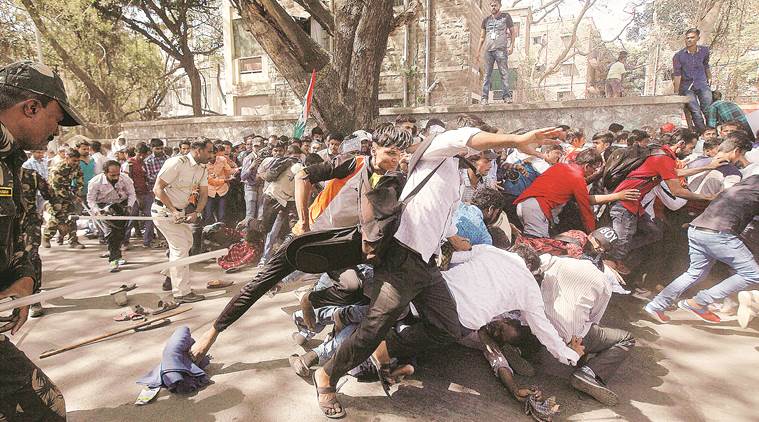 Many excesses of the police and military forces go unreported or partially reported. A recent incident of injuring hearing impaired has not been covered widely in mainstream media. According to a report in “Indian Express” (February 26, 2019), Pune City Police lathicharged agitators with hearing impairment when they tried to take out a rally from the Commissionerate of Social Welfare demanding better education facilities and reservation in jobs among others.

About 35 hearing impaired persons were injured in the incident. Another 170 activists working for Maharashtra Dumb and Deaf Association were detained and later released (“Lathicharge on Protesting Hearing impaired Youth …” by Chaitanya Mangure, February 25, 2019, news18.com). The incident drew widespread flak from the political parties even as the Maharashtra CM sought detailed report from police.

This incident once again brings to the fore problems of disabled not being addressed by the governments. The protesters — about 11,000 hearing impaired youth from across the state — were demanding right to quality education, provision of trained interpreters for deaf students and preventing fraudulent distribution of disability certificates to able-bodied individuals.

Many institutions remain inaccessible to the deaf and dumb and many vacancies belonging to disabled have not been filled. The discrimination of disabled is prevalent in many sectors and there has been very little progress regarding welfare of the disabled.

The National Platform for the Rights of the Disabled (NPRD) has condemned the brutal lathi charge on disabled persons in Pune on February 25. It has expressed solidarity and unflinching support to the striking agitators. It has asked the government to engage in talks and concede their legitimate demands and implement the provisions in  the act in a time bound framework. (“NRPD Condemns Lathicharge on Hearing Impaired…”, February 26, 2019, kracktivist.org).

Pradip More, the secretary of the State Level Association of the Deaf said, ‘When we tried to take out a rally,the police ordered a lathicharge in which several of our protesters were injured. They also detained some of the youths’.

There is widespread apathy to problems of the disabled. This protest reflects growing dissatisfaction of the handicapped youth due to growing unemployment and non- fulfillment of backlog vacancies. Youth who have different type of disabilities are also suffering due to lackadaisical approach of governments. Despite passage of laws for the disabled, it is sad that steps for welfare of handicapped are still a mirage.

As expressed by a politician, ‘the government is least bothered about their issues. It only wants to win elections and earn money’. Hopefully, the future will not be as bleak as it is now.

*The writer from everywhere and anywhere defends rights of disabled persons