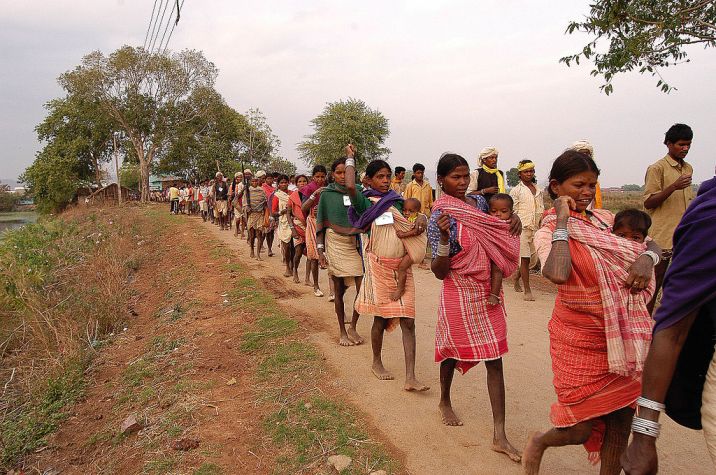 The mainstream development paradigm has aggravated discontent among Adivasi communities. The reasons are not difficult to recognise—it encourages the siege of native resources, drives competition, is surplus-driven, instils private ownership, and consequently, is affecting the cultural identity of Adivasi peoples.

Adivasi thought leaders believe that the root causes for the failure of development lie in a failure to understand their world view, and the continued imposition of the dominant development paradigm is significantly affecting the of well-being of Adivasi peoples.

The process of pushing Adivasi communities from their traditional homelands to distant frontiers is not new. Historical research shows that the eviction of Adivasi peoples is an age-old process. Their geographical history has been one of incessant displacement and relocation—often with the use of force and violence—deeper and deeper into inhospitable terrain.

When it comes to forest land, the usage and access of resources by Adivasi peoples has been considered to be ‘encroachment’ by the government. In 2006, the Scheduled Tribes and Other Traditional Forest Dwellers (Recognition of Forest Rights) Act, tried to amend this by recognising the customary rights of forest dwellers, including the right over commons areas, as well as the right to manage and sell forest produce. However, implementation of this Forest Rights Act (FRA) has been unsuccessful, with inadequate community awareness, conflicting legislations, lack of dedicated structural implementation, administrative roadblocks, and government deficit.

The forest bureaucracy, reluctant to give up control, has misinterpreted the FRA as an instrument to regularise ‘encroachment’. This can be seen in its emphasis to recognise individual claims while ignoring collective claims (Community Forest Resource (CFR) rights, as promised under the FRA).

To add to this,  the Ministry of Environment, Forests and Climate Change (MoEFCC) has reportedly been pushing for a new set of rules that would dilute the FRA, and limit the power of local governing bodies like Gram Sabhas, despite objections raised by the Ministry of Tribal Affairs (MoTA).

Local governance structures and systems where decision-making starts at the smallest unit of human settlement—in which every individual has the right, capacity, and opportunity to take part—must be kept alive. Communities should mobilise to file their community forest rights claims under the FRA, and facilitate community-led regeneration and conservation of natural biodiverse forests.

Local governance structures—in which every individual has the right, capacity, and opportunity to take part—must be kept alive | Photo courtesy: Wikimedia Commons

While Adivasi parents do feel that education and literacy are important, sending children away to residential schools also means that an entire generation will not learn their way of life, and will be alienated from agriculture, forests, and their parents’ livelihoods.

Children studying in residential schools are allowed to go home only once in a year, and struggle to bridge two totally different and disconnected worlds together. In an attempt to be mainstreamed, many lose their Adivasi identity.

“The dominant education system in India is top-down. In this system, everything is de-contextualised,” says an Adivasi youth.

Facilitating dialogue on the implications of emergent ‘development’ paradigms, deliberating possible alternatives, and supporting efforts of Adivasi communities to envision their future is extremely necessary today.

Spaces need to be created for inter-generational learning for young Adivasi peoples, where adults in the community can play the role of ‘teachers’, impart local knowledge and reclaim the culture of communitarian living. To build curricula, traditional experts and thought leaders should interface with scientists and academicians from mainstream institutions. Curriculum should be contextual, and based around local issues—Adivasi agriculture, architecture, agro-ecology, food sovereignty, direct democracy, PESA and FRA.

However, in recent years these self-reliant, biodiverse agricultural practices have been under threat. The green revolution model of agriculture, in the name of modernisation, has been characterised by the imposition of alien agricultural technology, ‘high-yielding’ varieties of seeds, the chemicalisation of farming, and the growth of commercial mono-cultural plantations, all of which have endangered the farms and forests of Adivasi peoples.

Livelihoods based on the essence of the agro-ecology, in keeping with the non-accumulative attitude of Adivasi peoples must be created.

Democratising production and consumption, involving clusters of villages with common ecological features to enhance local self-reliance in which tribal villages can trade goods and services with each other would reduce dependence on the outside market and government.

Although only 8.6 percent of the Indian population, Adivasis disproportionately represent people living below poverty line, and suffer from poor physical health.

When it comes to food and nutrition security, Adivasi areas have been identified as high-risk areas. Several factors have contributed to the increasing food insecurity, ranging from loss of traditional food sources in the forest, and decreasing size of land holdings, to a shift from self-sufficient agriculture to chemical-intensive agriculture, and increasing land alienation.  All this has rendered a considerable part of Adivasi communities as food insecure, with growing numbers falling into food scarcity and starvation.

Modern doctors should be exposed to local health traditions—working with healers, midwives, traditional birth attendants, and so on—in order to sensitise them regarding local practices, and to come up with a framework to distinguish between ailments that require traditional healthcare and those that require clinical assistance.

To address malnutrition, the core existential issues that affect Adivasi peoples and other rural marginalised communities need to be examined. Poverty, indebtedness, food insecurity, lack of control over productive resources, and so on, all significantly impact nutritional outcomes. With critical reflection of these underlying structural causes, the communities themselves should undertake the responsibility of addressing them and decide the next course of action, as opposed to approaches where outsiders ‘consult’ communities, with no assurance that they will actually do anything.