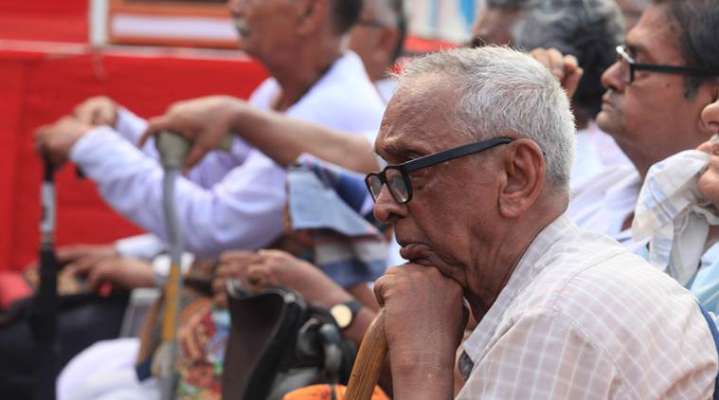 In recent years, there has been a myriad shift in the history of humankind, namely the rapid ageing of the earth’s population. Aging is a universal process and no human being can escape from this. In the last few years, a majority of the older adults seem to contemplate on successful ageing and they define successful ageing as multidimensional which encompasses physical, psychological, functional and social health.

There are approximately 600 million people over the age of 60 living on this planet. By the year 2050, this figure is expected to quadruple to two billion. A joint report by the United Nations Population Fund (UNFPA) and Help Age International said India has around 100 million older adults and the number is expected to increase to 323 million by 2050, constituting 20 percent of the total population.

Elderly or old age consists of ages nearing or surpassing the average lifespan of human beings. The boundary of old age cannot be defined exactly because it does not have the same meaning in all societies. In the Maintenance and Welfare of Parents and Senior Citizens Act, 2007, senior citizen means any person being a citizen of India, who has attained the age of 60 years or above.

The ageing process is a biological reality which is largely beyond human control. However, it is also subject to the way in which society makes sense of old age. In the developed world chronological time plays a vital role. The age of 60 or 65 in the developed world is considered the age of retirement and is an indication of the beginning of old age. In contrast in the developing world, other socially generated meanings of age are more prominent such as the roles assigned to older people.

For some, it is the loss of roles that accompany physical decline which is a defining factor for old age. So in contrast to chronological milestones which signify life stages in the developed world, in many developing countries old age begins when active contribution and involvement is no longer possible. The United Nations has defined an older adult, as an individual over the age of 60 years.

However, communities and families often refer to various other socio-cultural aspects to define age such as family status, eg. grandparents; physical appearance eg. grey hair and wrinkles; or health conditions related to age. However, the effects of psychosocial and psychological traumatic experiences coupled with poor nutrition and exposure to disease has led to faster ageing in refugees than settled populations.

As of 2011, India has a population of 1.21 billion people. It is the second most populous country in the world, only to China. The UN defines a country as ‘ageing’ where the proportion of people over 60 reaches seven per cent. By 2000 India has exceeded that proportion (7.7%) and is expected to reach 12.6% in 2025. By that definition alone, India qualifies as an ‘Ageing’ country.

An ageing population puts an increased burden on the resources of a country. With more mouths to feed and fewer hands to earn, the productivity of a country goes down. Nearly 60-75% of all older adults are economically dependent on others, usually their children. Even those with pensions find their economic status lowered after retirement.

The elderly population in India is growing phenomenally in numbers and at the same time, the size of the family is reducing, especially in the urban areas. The joint family system has been prevalent for a long time in India and the children especially the sons cared for their aged parents. Nevertheless, in recent times, there has been a change in the family structure and the traditional joint family system is on the decline.

With the increase in nuclear families, Indians are moving out of the traditional mode of ageing such as caring for their aged parents at home. The family system is undergoing many changes as the physical and mental health of older adults begins to decline and this has led to the issue of community care for aged parents and the emergence of old age homes in India.

In recent years the family system seems to be embracing and critiquing western living and one such change in family life is that a large number of older adults are joining old age homes. As a result researchers from different fields are showing interest and are doing research on the changes and effects of this transition on older adults. Though there are no concrete figures for old age homes in India, their number is estimated to be more than 1000. However, at the same time, it has also been noted that there is a lack of literature that attempts to give older adults a chance to express their lived experiences while residing in a care home.

Often older adults go to old age homes as they give them security and medical attention. They may experience loneliness but at the same time feel a sense of independence. On the other hand, some of them are forced to move to an old age home because they have experienced lack of emotional support, verbal and at times physical abuse, neglect and disrespect from their children.

But, often in spite of this, they seem to prefer to be living in the comfort of their own home with their children and grandchildren. Older adults living in old age homes face problems of adjustment with tight and rigid schedules; total or near-total separation from their family, friends and society; anxiety over entrusting oneself to a new environment; diminished physical ability and close and frequent encounters with death and ailments in the institution.

For many of them social support is almost absent and this leaves older adults with the feeling that he or she does not belong, is not loved or cared for, esteemed or valued. These and other factors make older adults increasingly vulnerable to mental health problems and their undesirable effects.

Older adults have unpleasant experiences as they not only have to deal with change in their living environment but also have to get used to changes in daily life routines and social and support networks. They feel the loss of family and a sense of loneliness due to the loss of social interactions. They also feel a sense of powerlessness and their perceptions and fears had adverse effects on their adapting and settling into a new environment.

Often they join the old age home because of the loss of a spouse, deterioration in health and the inability to look after oneself due to physical illness and disability, which leads to increased financial problems. Older adults take time to be acclimatised to a new environment when they relocate to an institution, which they have to call home. They take time to adjust to and transform their perspective of themselves and their environment; they actively reflect on their life experiences and the struggles they experience and cope with, as this helps them to create a meaningful existence within the context of a care home.

They eventually get completely involved in the life they are supposed to live. In addition to this, the holistic needs of older adults such as social, mental, financial, spiritual and physical needs are to be considered in order to promote a purposive and meaningful life for them. Though older adults seem to find satisfaction in life across the life cycle, there seems to be a rapid decline in life satisfaction among the older adults who are 85 years and above.

The reasons being that they experience debilitating health conditions; increased risk of frailty, functional impairments and poor health; and this puts restrictions on their life satisfaction and also overwhelm them to such an extent that their expression of well-being is moderated. With increased frailty and deteriorating health comes the fear of falling which seems to be a common complaint with older adults.

In order to cope effectively, they learn to discipline their daily lives by learning to accept and live with the challenges of their vulnerable and deteriorating physical condition and the loss of control at different levels such as when they fall, from incontinence and from the stigma of facing an embarrassing situation. Older adults try to be as independent as possible but are also dependent on community care. They cope with their fear of falling by strengthening their will.

Focusing on family and community networks, research indicates that older adults turn to immediate family for specific kinds of assistance and also look to friends residing nearby for alternate sources of help. Older adults also use their social network when they need to confide in and talk to people about health concerns but do not seek much help when it comes to household chores, financial advice or transport.

The rapid growth of the elderly population highlights elder care as an important issue in India. The issues of elder security and well- being are becoming a matter of concern. There is a need to take care of older adults, with a focus on social and mental well-being, economic and social security and elder abuse. Considering all these factors there seems to be a need to understand the experiences of older adults in order to adopt effective mechanisms by which they will be cared for and respected and will be able to live a life with dignity.

However, though there is a need to create an awareness among older adults and their families; and caregivers of old age homes, about the needs, experiences and coping styles of older adults; it would be more beneficial to empower older adults to be emotionally vibrant about living positive and fulfilling lives. This will help to reduce the stress and difficulties of living in a home and also enable older adults to experience the joys of living in their twilight years.

A large fraction of older adults are living either in a home for the elderly or alone at home without the support of immediate family. It would be interesting to explore the life experiences and the coping styles of these older adults. Research could also explore if living with family has more meaning for older adults than when living in a community. We need to admit that residing in an old age home is challenging and stressful. In India today, the ‘old age home’ is no longer a western concept.

There are old age homes in India, that are making an effort to uphold the needs, desires and values of older adults, while also creating and fulfilling new ones (Lamb, 2007). In order to facilitate a more meaningful, fulfilling and satisfying life in older adults, they can be helped to be more positive and hopeful. To enable this, special emphasis can be laid on Psychological Capital (PsyCap) of the Elderly.

It focuses on the individual’s positive mental power and positive ageing and offers a new perspective on how to help older adults live a fulfilling, happy, and vibrant life. For those older adults who live in old age homes and are lonely and have almost nothing to look forward to, PsyCap will give then renewed confidence and faith in themselves as it focuses on enhancing mental health by instilling a sense of hope, optimism, self-efficacy, wellbeing and resilience.