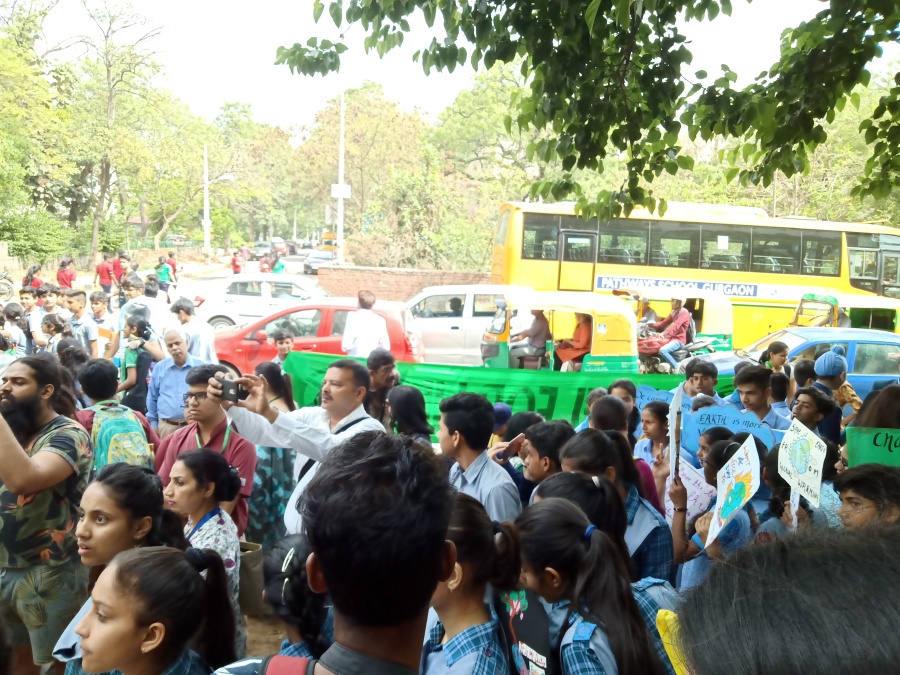 The movement for declaring Climate Emergency to stop fossil fuels and every other polluting sources is gaining momentum globally with more than 1.5 million people participating in the previous Global School Strike for Climate on Friday March 15. On Friday 12, India and UK organized a major event.

We chose to rise up and take direct action where older generations have failed. We are already facing devastating and irreversible impacts around the world. This is our final chance to fight for our futures, and our ages will not be what stop us.

Despite the fact that India is as much affected by the unfolding climate catastrophe, for a variety of reasons, both the government and society is sleeping into disaster. Surrounded by seas on three sides and the Himalayas to the North and the Asian Brown Cloud above our heads, we may not yet feel the heat of global warming. The water supply into our cities also makes us immune to the droughts faced by more than half of the country and intermittent and abrupt floods at other times.

Ironically, as the unseasonal rains on April 7 in Delhi is evidence, the radio channels see this as a welcome respite from the heat, despite the fact that it will inflict plenty of damages to the harvest-ready wheat, chana, sarson crops and further hurt the already distressed farmers.

With the Indian monsoon entering into the 30-year dry cycle, we have a long and increasingly uncertain summer ahead. Most of the rivers will have less water in this cycle. Yet, with increased moisture content in the atmosphere due to higher temperature, we are likely to witness more abrupt precipitation and flash floods. Like we saw during the Kedarnath floods few years back and Kerala floods last year, the incessant deforestation and construction activities further amplify the devastating impact of these floods on humans and livestock.

While it is heartening that teenagers and children were highly inspired by the climate movement around the world and by its leader 16-year old leader climate activist Greta Thunberg, activists in India like us have to further lift up their energy levels and ingenuity to build pressure upon the new government, that will take office in 7-8 weeks’ time by the last week of May.

With the fast growing adoption of air-conditioners, and now air-purifiers, motor-pumps and numerous other electrical appliances, the overall demand for coal, fossil fuels, nuclear, hydel and other such environmentally destructive diabolic energy sources is only going to climb, unless we work much harder on mitigation as well as adaptation, that doesn’t make matters much worse.

For this to happen, we need to shift the narrative from panic to hope.

The children who had assembled from various schools and waited for more than 2 hours to meet the Minister and submit their demands, were stopped at the Ministry of Environment gates despite repeated pleas from the teachers.

The Ministry once again failed in its duty. First, in failing to stop the high levels of pollution, tree cutting, urban and industrial sewage into rivers, that the children wanted to be stopped and reversed. And now in stopping the protesting school students in this hot and muggy weather in the hellhole of Delhi.

The Ministry sent a junior officer and then the Joint Secretary who failed to satisfactorily answer the questions.

I spoke with people present on how the Ministry for Environment was failing us and it was callous of the Minister to chide children not to burn firecrackers in Diwali. Delhi is worst polluted city in the whole world where dirty diesel rules the roost and the situation has only worsened in the past 5 years.

The stark reality is that the government is trying hard to hide its abject failure to check killer air-pollution from fossil fuel cars, industries and power generators; urban and industrial sewage dumped into rivers; mountains of landfills and garbage heaps releasing dangerous pathogens and stench in air, right under its nose, even as it has been spending thousands of crores of public money tom-tomming its Swachh Bharat Abhiyan. 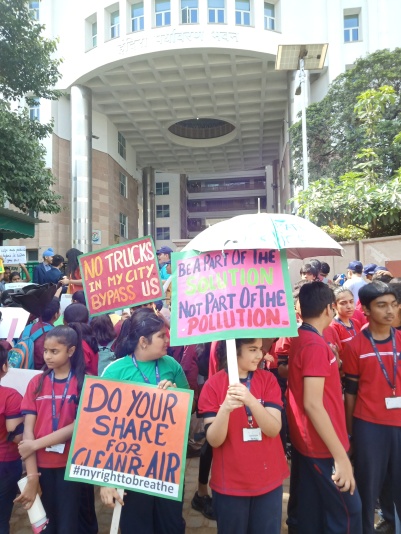 As a climate activist for two decades, a parent of two teenage daughters (16 and 11) and walking the talk on keeping the ecological footprint to the minimum, and yet sensing how close we are to runaway climate catastrophe, this is the best of times and the worst of times. I am glad that the school children and youth around the world had the courage and conviction to question and challenge the status quo and rise to the occasion.

At this stage I would like to share following note on the way forward with key pointers:

From Panic to Hope

How do we shift the narrative on Global Climate Emergency call by youth and children around the world?

“Hope is not the conviction that something will turn out well, but the certainty that something is worth doing no matter how it turns out.” – Václav Havel, Czech dissident, writer, and statesman

Are humans greedy? If not then why has greed blinded us from the immoral cannibalization of the future of our children driving them to distress and rebellion? – Demystifying the Lauderdale Paradox.

Why are our “sovereign” nation-states so distrustful and paranoid of each other and their own citizens that they need trillions of dollars of the military, defense, policing and prison establishments that further steals away the commons – natural resources that belong to our children and the billions of dispossessed and marginalized in the society? – Transferring the military budget with a 20-year moratorium to a Climate Emergency Fund for mitigation and adaptation

Do we need to devolve the oversized, giant nation-states ( economic juggernauts mindlessly competing with each other) progressively to the community level towards Localised, Abundant and Circular Economy (LACE) that function as Carbon Sinks with a global mandate of progressive reward and taxation framework to sequestrate excess GHG to safe and healthy levels? – Shifting from Diabolic Energy (Fossil fuel, Coal, Nuclear, Hydel, Solar, Windmill) to Metabolic Energy (human power, animal power and plant power in symbiotic, synergistic and sustainable ways)

Are we all inherently indigenous before some of us turned into colonialists and supremacists and call ourselves as non-indigenous? – Call to our common indigenous roots on Mother Earth.

Beyond prevalent definitions of indigenous as localised folk and tribal cultures and societies, how do we define the Global Indigenous as the Classical and Cosmopolitan Culture that unites Humanity as a whole, – Call for United Nations to transform as GAIA* – The Earth Parliament (Global Assembly of Indigenous Autonomous States) that heralds the coming of the Indigenous World Order founded on core necessities of Livability, Equitability, and Sustainability.