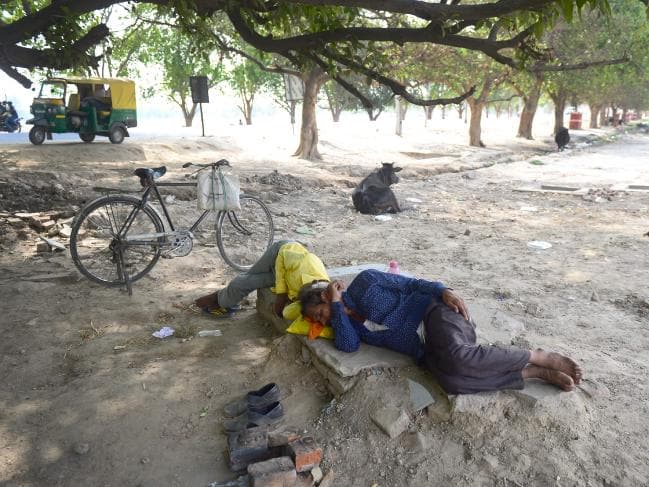 While summer is uncomfortable to most of middle class people, it takes heavy toll of the daily laborers, marginalised casual workers and industrial manual employees. The rich and most government employees take some shelter under air conditioners or coolers but large number of ‘fourth -class’ employees, the street hawkers, peddlers, beggars and daily wagers are forced to work in scorching heat conditions.

Deaths due to heat wave are reported usually without classifying their state of ‘class’ or ‘caste’ . If carefully analyzed most of those who die are from dalit and marginalised sections who work ceaselessly throughout summer for their daily bread and face risk of sun- strokes.

The amount of overall heat energy trapped by greenhouse gasses is jaw- dropping. Between 1971 and 2010, the IPCC’s Assessment Report tells us that earth gained 274 million million billion Joules. As James Hansen said, this is ‘ equivalent to exploding 400,000 Hiroshima Atomic bombs per day 365 days per year. Since 1970, the energy trapped is equivalent to four Hiroshima bombs per second. Thus, the consequences of global warming are very grave and need to be addressed quickly and serious measures should be taken to reduce loss of life.

The number of people dying due to heatwaves has been on the increase. In the last decade, with over 2,000 people being reported dead during 2015 heatwave in India. A paper published in ‘Science Advances’ establishes a mammoth 146 per cent increase in the probability of heat – related mortality in India due to the increase summer mean temperatures. Rising global temperatures are leading to extreme weather climate conditions like droughts, floods heatwaves, etc. The rise of temperature has been 0.5 degree Celsius over last 50 years.

During summer, the vulnerable sections face lot of suffering and diseases due to heat and humidity. They do not have proper health- care mechanism nor do they have provision of food and clean water. The slum dwellers , mostly SCs and STs or OBCs, have no proper shelters during day time. The women and their babies have insufficient protection from heat and are often exposed to hot air in the day. Governments  have done little to assist these sections. They have no income to take precautionary measures.  Even the supply of ORS packets is inadequate.

The labourers, especially women, lead pathetic lives. They have little time to protect their bodies from heat because of the nature of work. There is no policy for these people to protect themselves from such manual work that demands hours of exposure to the sun. Their labor goes unnoticed.

Social activists should take up their travails and tribulations in a proactive way and put pressure on rulers to frame policies which give them help in summer and restrain them in working in sweltering heat without any minimum protection. Some sort of economic social and medical benefits programmes should be formulated to tackle intense heat by the marginalised  sections.

*Writer from anywhere and everywhere is interested in human rights issues