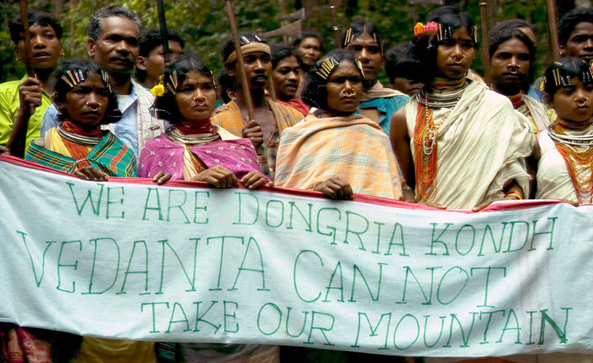 The number of tribal movements across the country has surged and the tribal people are starting to gain the confidence to raise their voice against getting exploited. The landmark judgments like the Vedanta-Dongria Kondh verdict have given them this confidence. The tribal communities are strongly associated with their land, culture and ethnicity and most of their struggles happen against institutions which try to disrupt their tradition. Usurious money lenders extend loans to the tribal people and the default from paying back which results in surrendering their lands to them.

They are not helped by government officials in this regard and eventually become bonded laborers. Numerous tribulations like low wages, land abuse, diaspora, sexual harassment and forced labour have made the tribal communities to revolt for their livelihood.

Generally, tribal rights movements are characterized by the strength of the community in number and their economic well-being irrespective of goal orientation. For example, the tribal communities living down south are very less in number, too ethnic and isolated which resulted in disconnect and none of the movements became significant.

Institutionalization gradually finds its way into the structure of the movement though if it was initiated by great leaders without affecting the crux. These communities are localized and restricted by geographies preventing them to come forward as a whole single Pan-India movement. Other factors like their awareness of the external world, geography and prior experience also influence their motivation to initiate a movement.

If we look at the approaches used by these communities they fall into two broad categories, non-violent and militant path. The first one involves negotiation with the stakeholders and employing a variety of pressure tactics. The latter one involves pure revolts and mass struggles. The choice of approach depends on what they want to achieve, either a social reform or a structural transformation. Both of these approaches fail if these communities don’t stay united.

Post-independence both the central and the state government have made huge efforts to safeguard the tribal people from the above-mentioned tribulations. They have inculcated these efforts in the 5-year plan but they were not fruitful because of the priority given to the society and infrastructure developmental plans.

Construction of public infrastructure and industrializing the areas containing natural resources have made these communities relocate resulting in the loss of their identity. The major chunk of tribal communities is not educated to face these challenges as they are poor and economically depressed. Few communities of central India have changed this trend by revolting against their exploiters and have successfully restored their identity and culture by retrieving their lands.

One such landmark movement in Indian history is the Vedanta-Dongria Kondh movement. This article narrates the incident and the approach followed by this community — how they came forward and how they achieved.

Dongria Kondh has a strong connect with Niyamgiri hills and they survived by growing 100+ crops and gathering food from the forests. The mining giant Vedanta Resources attempted to occupy this region for bauxite mining and had already set up a refinery nearby. The 8,000-strong community has been campaigning against the mining project for almost a decade amid alleged intimidation by paramilitary police and local goons.

Many locals and organizations, including activists and international groups including Survival and Amnesty International, have worked hard to amplify the Dongria’s voices. The pressure on Vedanta was increased by Survival’s complaint to the UK government under the Organization for Economic Co-operation and Development guidelines for multinational companies.

In 2010 the Indian government blocked Vedanta’s bid to build the mine and India’s supreme court ordered that affected communities must be consulted about the project before it could go ahead. The Dongria unanimously rejected Vedanta’s proposal during 12 village consultations. The central government and the supreme court bucked the trend of siding with industry, and defended the Dongria’s right to their lands, their livelihoods and to determine their future.

Vedanta tried repeatedly to insist that the mine would help bring “development” to the Dongria but the government rejected as it will permanently alter Dongria’s way of life and culture. Vedanta opened a refinery to turn Niyamgiri’s bauxite into aluminum before receiving approval for the mine and has lost millions of pounds as a result. The Niyamgiri mines could not be opened as the Union ministry of environment and forest had scrapped Stage-II forest clearance on August 24, 2010. The Vedanta Aluminium Ltd’s (VAL’s) refinery has been shut since December 5 last year on bauxite unavailability.

The Dongria Kondh’s determination to protect Niyamgiri hills from the mining heavyweight Vedanta Resources has paid off, despite the state government’s complicity in the $2bn project. The Dongria case was about much more than the community and their homeland. India’s decision to reject a London miner’s request to mine bauxite on tribal landmarks a major victory for human rights in the country. The ministry’s decision to ensure that some places can and must be off-limits to mining restores hope that India will not abandon human rights in the pursuit of foreign investment.

This Incident is a lesson to fight against exploitation and injustice. This was possible only because of unity and unanimity among the community. The struggles against environmental destruction and societal damage is our very own fight. We as a nation should come forward to bring a change and make this society a better place to live in.

*Second-year student at the Indian Institute of Management (IIM)-Ahmedabad