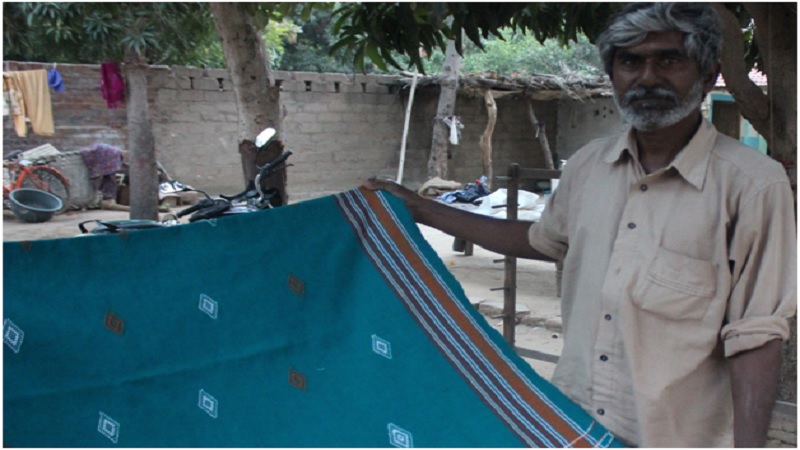 When Parma Bai put the red shawl on my shoulder as the programme was about to begin, I was overwhelmed. The other friends said that this is made by local Vanakar community person who was supposed to be participating in the training programme but could not come due to his own reasons.  I told friends that after our programme is over, I would like to visit some of the villages including this friend who made it for me.

Our day had started with all of us garlanding the statue of Baba Saheb Ambedkar at the chowk of the city of Bachau and that made me realize how people started thronging in since the morning to pay their tribute to Dr Ambedkar on December 6th.

Parma Bai is 62 year old Kutchi woman belonging to Dalit community. She came here travelling nearly 150 kilometer to participate in a training programme on Dalit and Land Rights. Her village faces threat as the Gujarat government has ‘annexed’ all the land of nearly 100 families under the ‘Shrisarkar’ land act which is actually meant to grab individual land of the people in the name of technicalities. Most of those suffering from the state land grab are the Dalits. Parma Bai has a charming personality. Her son was a plumber but he learnt driving and left India and now working as a driver in Muscat.  I ask her about Baba Saheb Ambedkar and his meaning to him. “He is everything for us. He is our God,” she says. He did what we could not have got, she said. Whatever we are today, it is because of him, she says. I ask, whether she follows Buddhism and she says, no, we worship Ramdev Peer but the new generation is embracing Buddhism she says. Even her son is inclined towards Buddhism as suggested by Baba Saheb. Parma Bai says, she won’t stop her sons from embracing Buddhism if they decide to do so.

For me listening to Parma Bai was a treat and a realization how Baba Saheb Ambedkar touched the life of common Indian in almost every part of the country and when you hear about their narrative and understanding of Dr Ambedkar, you only have tears in your eyes about the man his mission and his vision for his people.

Sharing his story in our programme was Jaga Solanki, 58 years. He has 3 sons and four daughters.  Though he could not get any education, his children got an education, though not in the way he would have wanted. They were four brothers. His village Ambilayara, which is about 18 kilometer from Bachau town, in Bhuj district have about 50 families of Dalits, about 250 families of Koli Thakurs, 60 from Darbar, 250 from Patel and about 250 from Rabari i.e. maldharis.  The MLA and MP of the area also hail from Dalit community, but are of not much use.

The community had legally owned 2.5 acres of land for cremation in the name of land for ‘shamshaan’ but one dominant Patel grabbed a large part of the area meant for the cremation against which the Dalits in the village fought for their battle nearly four years.  The battle started in 2012 with sitting for 11 days at Bachau Taluka Panchayat, but the Nagar Palika Parishad did nothing.  Then they sat on dharna at the Bhuj district head quarter for 9 days where a compromise happened and the Zila Panchayat head accepted that the land belongs to the Dalits and must be given to them. But no official was ready to take action against the dominant Patel who had built cemented structure there.  The situation remained the same and every time the officials were using tricks to finish off any public protest.  In December 2015, the local collector had decreed the two acre land in favor of the cremation place for the Dalits but there was no implementation. The struggle continued till one day, Jaga’s younger brother died under very suspicious circumstances on his field. His body could be found the next day and police did not help. The body was sent for the post mortem to Jamnagar but Jaga refused to accept the body.  Four dayshad passed and the situation was becoming out of control and therefore finally police had to act and demolish the illegal structure constructed by the Patel. Jagga Solanki finally succeeded to bury his brother’s dead body at their own place.

Even though Jaga Solanki is not literate, he knows things about Baba Saheb Ambedkar and wants his family to follow his path of Buddhism. We cant get anything of these Hindu Gods. The entry of the Dalits in the village temple was not allowed hence they built their own Ramapeer temple. I fould him very enlightened person whose successful story of struggle is an example for all of us.

After staying for an hour at Shri Jaga Solanki’s place and meeting his children, we decided to move to another village Vanat Nagar weaver colony which has about 60 families of the community. I enter into the house of Shri SavjiVankar who has two sons and two daughters. His daughters are married and now he is supported by his wife, sons and daughter in law in his weaving work.  I loved his house which is very open and have a lot of trees but it is combined house in four plots. He does not own any agricultural land, hence the family totally depend on weaving. I thank Shavji for his red shawl that was offered to me during our programme, I ask him about how many can be weaved in a day and he respond that they can make two when all work together and material is ready. The entire family does work for weaving on a contract basis for a Bhuj based NGO which give them Rs 1800/- per day for the entire work. I am amazed. “Then you must be earning over Rs fifty thousand per month,” I ask. “No Sir.  The thing is that we don’t even get work for 10 days and can you imagine, I along with my son and wife and daughter in law are engaged in the entire exercise. We know that the organization might be selling this in an expensive rate but, we can’t do anything as none come to us directly.’”  I call this is absolute exploitation but then in the absence of our own marketing management Dalits despite all their merit don’t get the right price.

His son Arvind joins us. He is happy but complained the exploitative mechanism which is contract based and no social security. “I passed 12th standard,” says Arvind “but my teacher never wanted me to learn English. He would say, are you going to be in England by learning English.” Arvind says, that today, he feel that because of inability to communicate in English language, I am unable to contact directly to people abroad. If I had learnt English, I would have been dealing with clients directly and our business would have flourished and not depended on any one.

He says, our work is very difficult. To prepare raw material for weaving, it take nearly eight days but there is no payment for that. We are paid only when we ‘technically’ start working on our machine but this is wrong as most of the work is done long before that but that is not compensated as ‘work’. I am shocked to see this Gujarat model where you don’t care how the families live and don’t even pay for the meritorious work.

Arvind’s six-year-old son Divyesh writes his name in English on my note pad when I ask him to do so. Arvind says,“I want to get my son educated in best school and must learn the English language.”Savji also feel that they have been exploited for long but it is because of Baba Saheb Ambedkar that they have got life and dignity. Today, the entire family believe in Buddhism and want to follow the path of Baba Saheb. Savji is so happy with my coming there that he bring a shawl to offer me which don’t want to take given his hard work but he is determined to give it to me ‘as you are doing a great service of our society and Baba Saheb mission’. I inform him that speaking to him and the family has given me lot of thoughts how Baba Saheb Ambedkar influenced the lives of millions of people.

It is late in the evening now and there is darkness so we start to move and my last destination is the house of local activist Ram ji working with MARAG organisation in Bhuj. His mother had already cooked food for me including Bajre kee roti. Ram ji’s family too embraced the thoughts of Baba Saheb Ambedkar and they are now challenging the system. Ram ji fought hard at personal level as he fell in love with a girl from Patel community but after nearly a decade old struggle, now both the families have accepted them.

Over 110 families embraced Buddhism in Kutch on October 14th, 2019 including Shri Jaga Solanki and the Buddhist movement in the region is going to spread. Listening to all these voices of communities which have faced marginalisation and caste discrimination, it looks very clear that they are ready to fight back now with their honor and dignity and Buddhism and Baba Saheb Ambedkar’s mission is their biggest strength. A short yet meaningful visit to Kutch on the Mahaparinirwan Diwas of Baba Saheb Ambedkar enabled me to meet these wonderful and enlightened people and it was my duty to bring those stories to people elsewhere to understand how Baba Saheb influenced the lives of  common people in India.