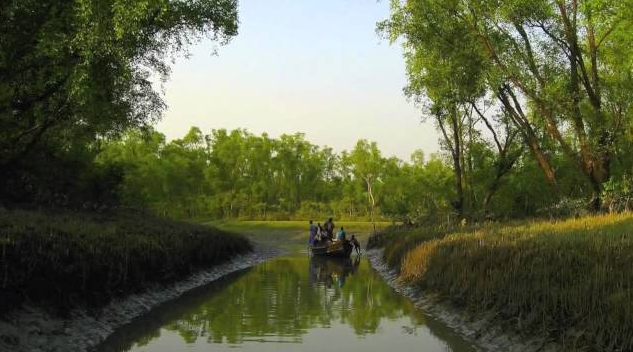 “This life of mine’s been nurtured by a river
In its arteries flow the gifts of mountain-peaks
Its fields have been shaped by many alluvial layers
Mysterious vital juices from diverse sources have spread themselves in harvests upon harvests
From the east and the west networks of song-streams lull its sleep and wake”
— Translation from “Janmadine” (On the Birthday), February 1942

This was one of the last poems written by Gurudev Rabindranath Tagore. Bard of Bengal, Kabiguru, Bishwakabi, world knows him by many names. He reveled in life with the curiosity and wonderment of a child. In the Preface of “Gitanjali” (1912), the collection of poems which made him the first non-European to receive the Nobel in Literature, WB Yeats says, “Pearl fishers dive for pearls, merchants sail in their ships, while children gather pebbles and scatter them again. They seek not for hidden treasures, they know not how to cast nets.” This was for Tagore as much as the children. Poet, musician, novelist, painter, educator, freedom fighter, rationalist, modernist: the world was his canvas.

In many senses, Tagore and his monumental work is the manifestation of those slippery terms: Culture and civilization. Indian and Bangladeshi bhavtaal is infused with his poems, songs and thoughts.

India and Bangladesh both adopted his songs as National Anthems. Bangladesh’s National Anthem is remarkable: Devoid of any call-to-duty or chest-thumping pride, “Amar Sonar Bangla” is a love-song for the land, its ripening paddy, mango blossoms and green river-banks. It sounds out of place on a military beat, like a child lost in the middle of a busy street and yet, it evokes longing for a land I haven’t even seen. This is a hallmark of the poet whose sensitivity was as razor-sharp as his intellect. 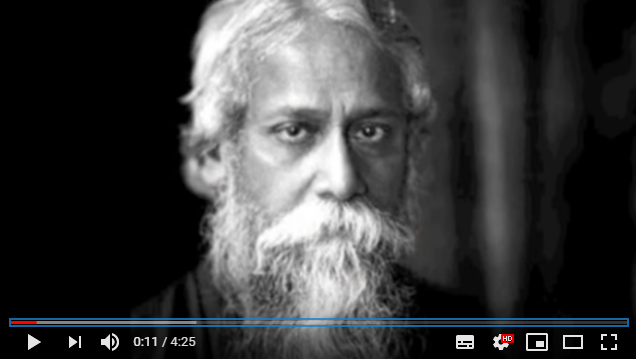 But what makes me visit Tagore again and again is the way he speaks the language of rivers.

Many times, people who spend their early childhood on the banks or in the vicinity of a river carry a river within them always which emerges through their expression in curious ways. Bengal is literally Nadi Matruk, river-born land. Unsurprisingly, rivers have permeated into the works of most artists of the region. We have written about Bibhutibhushan Bandyopadhyay, Adwaita Mallabarman and Jibananda Das.

But while I devoured the translations of several Bengali riverine works, I shied away from Tagore. In Marathi households like ours, it was PL Deshpande, an artist as joyous and talented as Tagore, who introduced Gurudev through his speeches, books and translations. And yet, Tagore seemed too big, too revered, too loved. There was hardly anything untouched about his works which I could stumble upon here. The effusive worship of my Bengali friends only made things worse.

And then, I came across, not “Gitanjali” or “Chhinna Patra”, but “Amader Chhoto Nodi” (Our Little River). A poem taught in fourth grade. The simple grace and feather-like joy of the poem talked of a real, living river:

“Our little river flows in graceful loops
The summer heat dries her to a gentle flow,
Both cart and cattle travel across with ease
Her banks are high, her depths are shallow

The sand bed glitters, no trace of mud
The far bank shimmers with Kash flowers white,
where flocks of mynas chirp busily all day
And jackal calls arise at night

This bank shelters sleepy hamlets in the shade
Of ranks of ancient mango and palm tree
At bath times, children swim and play
Splashing water at each other in noisy glee

Each day as their bathing is done
They catch little fish in nets of cloth
Women take home their pots scrubbed clean
Their washing all done, they return to their chores”

When the rains descend, the river swells fast
Rushing waters raise voice in happy uproar,
The muddy torrent spins in eddies and swirls
Both banks uniting in joyous clamour
Awake, to join in the festival of rain”

The momentous loss between the musical original that trips like a river and its translation is evident even for a non-Bengali, like me.

Tagore’s poems for children inevitably talked of rivers, boatmen, ferries and had an unbridled joy infused in them like a bubbly drink. They were untouched by the wistfulness of the boatman across the river in “Gitanjali”:

“The river has its everyday work to do and hastens through fields and hamlets;
yet its incessant stream winds towards the washing of thy feet.”[iii]

“Where the clear stream of reason has not lost it’s way
into the dreary desert sand of dead habit.
Where the mind is led forward by thee
into ever widening thought and action.
In to that heaven of freedom, my father,
Let my country awake.”

It is difficult, even erroneous to hold a kaleidoscopic talent like Tagore’s to one single metaphor. And yet, it is undeniable that he evokes a river with an old familiarity for each human experience. From love to heartbreak, from rationality to spirituality, from reason to epiphany.

As an artist, image of a river arises at the cusp of each of his iconic creations: his first short story “Ghater Katha”, the first time he composed “My own tunes for my songs” looking at river Sabarmati in moonlight,  to the poem which marked his arrival as a serious poet Nirjharer Swapnabhanga, the culmination of his decade-long sojourn on the river, when he wrote the collections Padma and the Golden Boat. At the journeys end, he again looked at the river (“Janmadine”) as a source of solace and a bearer of incompleteness. Some of his most productive works took form when he was on a river. In a not-very surprising coincidence,  he talked of a young mountain stream breaking its shackles in his early youth and just a few months before his death, he talked of a weary, meandering river spreading out into the delta.

Tagore’s first (or one of his first) short story “Ghater Kotha” (Tale of the River Bank), published sometime in 1885 when he was in his mid-twenties, announces of a writer who would forever speak in river tongue. The stepped Ghat on Ganga is a narrator in this story. It says, “Every day the Ganga moves a step further away from me; every day I too become a step older”.

From here on, it is difficult to find a work from Tagore where a river does not feature: Padma, Ganga, Jamuna, Bhagirathi, Kopai, Ichhamati, Gorai, Atreyi, Mayurakshi, Dhanashri, even Sabarmati, Kali Nadi from Karnataka, rivers of Pune!

His incisive poem “Nirjharer Swapnabhang” (1882) (A Spring’s Awakening), which, in his words, “bore the stamp of his own individual voice with a certainty and clarity not evident so far and inaugurated his adult career as a poet” is an ode to flow, to pravah, that one quality which defines a river. The poem is about a spring breaking its bonds and flowing, gurgling and roaring over the rocks that shackle it. It can be the anthem of dammed rivers. A small part of the poem, in the want of a longer translation:

“After many days has one ray
Appeared in the cave,
Upon the dark waters of my heart
Has fallen a single trace of light.
I cannot contain my heart’s ardour
The water trembles, it trembles,
It talks and sings a complicated tune.
Today in this morning I don’t know why
My heart has awakened”

For Tagore, river and flow were inseparable.

His seminal play “Muktadhara” (Free Flow), [x] written in 1922 deals with damming a free-flowing stream Muktadhara by King Ranajit of Uttarakut. Ranjit dams Muktadhara to establish his authority over the downstream region of Shiu Tarai, where “people look different” and have a “rotten religion”. His intent is led by his engineer Bibhuti, who does not care for the thirst of the people or their crops in the downstream, but only his creation: The dam and the machine. “God has given them the water; but He has given me the power to bind that water.” People of Shiu Tarai in the downstream cannot believe this. “The water to quench your thirst is in Bibhuti’s hands! If he withholds it, then you will dry up, like toads in a time of drought!”

“Our water in Bibhuti’s hands? Has he suddenly become a God?”

In what can be one of the earliest saga of dam decommissioning, it is the Crown Prince of Uttarakut himself, Abhijit, who breaks open the dam to allow Muktadhara to flow freely again.

Abhijit’s allegiance is not fettered to a political region. It lies with the people, with his own self and finally, with Muktadhara. Like Nirjharer Swapnabhaga, Tagore talks of shackles and freedom: of the mind and of the flow:

“Is it a small thing, to control the turbulent power, whether it is outside us or within us?”

“Every man has the mystery of his inner life somewhere written in the outer world. The secret of my own life has its symbol in that waterfall of Muktadhara. When I saw its movements shackled I received a shock at the very root of my being. Where there is an obstruction, there can be no rest. The dam seems to be built on my life’s current. And I have come out into the road to set free its course.”

Crown Prince Abhijit does set the Muktadhara free and in doing so, lays down his own life.

“Hark! What is that? What is that sound? It is laughter, bubbling up from the heart of the darkness. It is the sound of water. The sound grows in strength! My God! There is no doubt of it. The water of Muktadhara is freed!”

Many metaphors emerge from the play: That of jingoist Nationalism, fearing the “other”, hegemony of water, man vs machine: though not as a cliché. Tagore was a modernist. He did not oppose mechanisation just for the sake of it. As a rational mind, he did look at the cost benefit with open eyes, much, much ahead of the time. No wonder, the saga of free flowing river is performed in Bangladesh even today as India dams and diverts Padma through Farakka Barrage. He wrote Muktadhara even before the advent of the age of Large Dams in India, before he could see the shackled fate of Teesta, Padma and Ganga. His “Chhoto Nodi” Kopai is desiccating near Shantiniketan. Ichhamati is choking with silt and hardly has any freshwater.

As we dam and dry more and more rivers and convert life giving systems into taps, Tagore had grasped something which we struggle to understand till date.

Tagore’s river was inseparable from flow: unshackled, unbridled and a true Muktadhara. Remembering Tagore is also remembering the rivers he loved… the rivers he would have liked us to love, disregarding political boundaries. His stories talk of a very fragile love, but also a very clear-eyed and strong love, which can break high walls to make rivers flow again.

There are many forms of remembering. We can read a book of his poems. And we can work towards restoring the limpid fluidity of the rivers he loved, and hear his song.