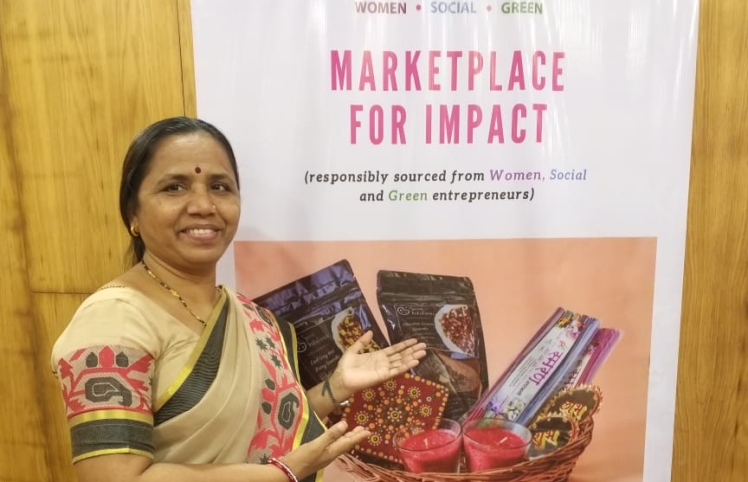 It’s a journey that started with a few thousand rupees. That was the size of the first loan received by a remarkable woman named Vidya Khustale. Vidya invested the money into her tiny business selling locally made detergents and brooms.

With the help of that initial investment and subsequent loans, Vidya’s business grew. In the 20 years since she received that first loan of five thousand rupees, Vidya has used the profits from her business to build a dignified life for her family, given good education to her son who is employed as an engineer and has also build a new home.

A chance encounter in 2004 helped Vidya break the cycle of poverty and also put me on a wonderful journey.I was posted to Mumbai to head my bank’s state operations in microfinance. I had spent my professional career in villages working with self help groups. I thought Mumbai would mark the end of my rendezvous.

I was however determined to keep alive my connections with grassroots .The opportunity came calling much earlier than I expected. One of my junior staff who was working with self help groups in tough and impoverished slums in Ghatkopar, a suburb in east Mumbai, invited me to join them on one of their visits.

I interviewed these women in their place of work (usually also their home), accompanied by our loan officer, hoping to capture a snapshot of their lives —to see their world and understand their experience through their eyes. Since the strength of the relationship between a client and their loan officer is impressive, far more robust than any bank, we could strike an honest conversation. The loan officers are a dedicated group of individuals who tramp through the dank maze of narrow alleys and cramped shacks. Here they meet and assist clients like Vidya.

Ghatkopar, like so many other suburbs, has been a magnet for migrants who come in search of better economic opportunities. They lead pathetic lives, holed in one-room tenements and low-rise homes dwarfed by the gleaming glass and chrome towers of the city. Most homes double up as work spaces, with the clang of metal, the whirr of sewing machines, and the pungent odour of spices mingling with the stench from open drains.

I found that women had grown up with an intense mistrust of local banks, which stemmed from a series of financial collapses. One college girl told us that her mother stashed money in a can of grains, lest her father discover she had money of her own. Her neighbour woke up one day to the news of a failing cooperative bank and a worthless stash of paper bills. Others told us of bank deposit agents who would collect deposits, only to close one day and swallow their client’s money, never to be seen again.

Stories like these were commonplace, which meant loan officers had to build trust slowly and diligently. I was told there was one woman who was trusted by everyone. It was she who made the job of our loan officers easier. She was Vidya .Vidya was not an archetypal activist. Diminutive and demure she hardly spoke. That was my first encounter with this remarkable woman. She had recently launched a 15 member self help group, which she christened Prerna Mahila Gat. It also ran an enterprise, Prerna Mahila Griha Udyog.

It was a cottage unit and produced household utility articles like incense sticks, perfumes, cleansing material, fruit jams ,squashes and candles,. When she was offered a loan, she decided she could not pass up the chance. It made the difference for the women’s families between barely scrounging a meal once a day and eating three times a day.

The self help group encouraged members to save small amounts a week. Members were coached to use those savings, coupled with loans and training, to start tiny businesses. I still remember Vidya explaining the operations: “We go door-to-door to sell our products. We have also tied up with a few kirana shops (retail outlet) to sell our products in Ghatkopar, Bhandup and Thane.”

After building a strong repayment history with several small loans, the group got a loan for Rs 1.25 lac from State Bank of India. “The entire loan processing experience was fantastic and completely hassle-free. Loan officers came to our workspace to collect the necessary papers and within a very short span of time, the loan amount got credited into our account. To have that vote of confidence from such a big bank meant more than the money did. The bank believed in my vision and took a chance on me when my financial obstacles were truly overwhelming “, exclaimed Vidya

Vidya’s ingenuity was marvelous. She was able to add a slew of products to the original range. The group added perfumes, jost sticks, elegant candles, soap detergents and herbal oils. The members worked hard to master the skills of packaging.

Marketing has been Vidya’s forte. She leads the group in various exhibitions. The group’s workshop has a factory like maintenance with an air conditioner and well oiled tools. The room also has a soothing ambience. With money from their business, one woman installed a toilet at home; one added a loft and another bought a sewing machine.

Later Vidya decided to furrow her independent path. She signed with Idobro, a social impact organization, in 2015. It provided her the capital to take on new staff, and add to the inventory. She has her own store, called Prerana Enterprises at Badlapur, where she stocks her own brand of everything needed for pujas. Vidya used her profits to buy a home in a safe suburb. Her son became the first child in the family to graduate with an engineering degree and is now well employed.

Vidya got involved with Idobro through several training programmes. She benefited from a 7 day entrepreneurship programme Idobro organised in partnership with British Council of India. Post the event, BCI published a compendium on which Vidya was featured and was invited to Hyderabad for its launch. Her confidence has grown while she improved her own skills. She has also realised the importance of inventory management, managing her database, social media and MS-office. Vidya is also a burning crusader and has been campaigning for a number of social causes. Her exposure to business has also triggered her social chromosomes.

Bankers have been fascinated by the sheer desire of these poor women to excel. The women have disproved the perception that the poor do not have skills or will not be able to survive on their own .All you have to do is to provide them access to capital and opportunity and see them take off. Women entrepreneurs often already have the skills needed to run their businesses; they simply need mentoring and supports that will help them grow.

Development is fuller and richer when we put money in women’s hands, especially the poor, who know best how to use it. When a woman receives money, her extended family usually benefits, as any profit percolates down and brings about the greatest amount of good to the greatest number of people. Women pay more attention to the children, to the household, and to the future.

These small loans have also shown that there is a consistent shift away from men dominating household decision making to joint decision making between husband and wife. The social benefits in terms of social cohesion and intra-communal solidarity have also carried as much weight as the financial payoffs.

For Vidya and scores of other women like her, being part of a self help group provides a source of additional income. But more than that, it gives them a sense of confidence and access to banking services, which was hitherto difficult, sometimes to the point of being impossible. Vidya’s success story underscores the importance of giving poor people access to loans, savings accounts and other financial services that can help them create businesses and reach their full potential. It’s worth remembering that sheer grit, and a helping hand, can sometimes blaze trails where none seem possible”. It feels so good,” beams Vidya, eyes shining with the glory of achievement.”I really feel like a modern businesswoman.”