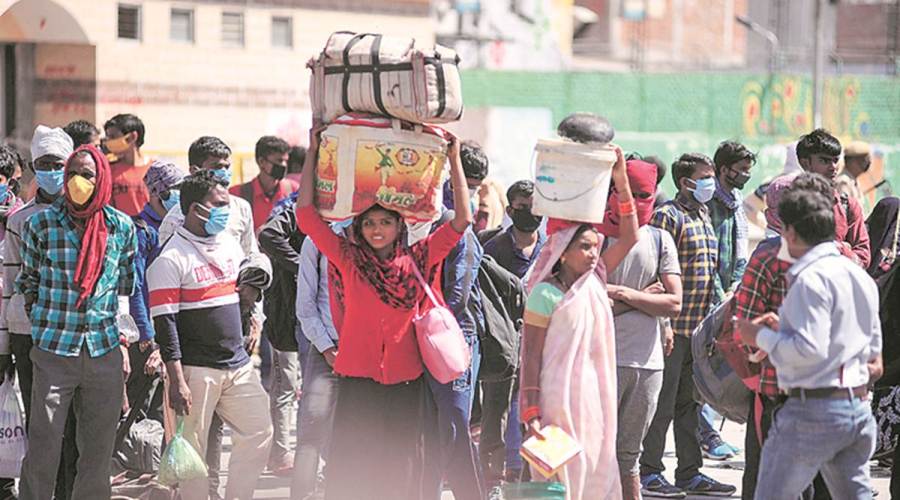 The heart wrenching exodus of stranded migrant workers from cities back to villages in the wake of the COVID-19 lock-down happening across is now unfolding in Himachal’s industrial belt Baddi as well. The Baddi-Barotiwala-Nalagarh Industrial area in the Solan district of Himachal Pradesh, houses more than 2000 industrial units and is known as the pharma hub of Asia.

With an annual turnover of more than 60,000 crores, this zone has a major concentration of migrant workers in the state of Himachal Pradesh, possibly between 1.25 to 1.5 lakh people. These workers belonging to various states mainly Uttar Pradesh, Bihar, Jharkhand, Madhya Pradesh, Orissa and many others have been under severe distress due to the sudden announcement of a country-wide lockdown.

Most of these workers are subcontracted daily wage labourers who live here in shanties and extremely congested dwellings on rent. Hoping for a better future for their children and moved by the socio-economic inequities and poverty in their native villages, these people are forced to leave their homes to strive to work and earn in highly polluted environments and stressful conditions.

Post the lock-down, as factories remained closed down, in the absence of any sources of income these workers soon ran out of the savings, if any, to buy rations and pay off their room rents. In the initial period contractors took care of some relief which soon ended and accessing the government sponsored relief has not been easy either.

Their only desire and demand, for the last month and a half has been to be able to return to their homes, but it is unfortunate that while the Himachal Government has been able to bring back its native residents, the same efficiency and empathy has not been shown in ensuring the return of these workers who contribute hugely to the state’s economy.

For instance, on 29 April 2020 , after the Ministry of Home Affairs ordered that movement of stranded workers be facilitated by state governments , stranded workers from the state of Uttar Pradesh have been consistently reaching out to various administrative authorities including appointed nodal officers and helpline and control room numbers in both states (H.P and U.P) demanding that their return back to their home be allowed and facilitated at the earliest but no support has been provided till date.

They have also registered themselves on the portals for online registration of migrant labourers initiated by both H.P and U.P governments, but no further update or follow up-call was received by them as they waited expectantly. The administrative authorities have also been passing the issue from one department to another which shows the lack of clarity and guidelines within the administrative apparatus.

While the Himachal government says that the consent from the state of U.P is pending, the U.P government has said that it is the responsibility of the ‘host’ government to at least arrange for transportation of workers up to the borders of the concerned states by bus or other means. Although the news has clearly stated that Himachal government will bear the cost of travel for migrant labourers, private operators have started plying their buses with the permission of administration but have been charging exuberant amounts from the already deprived workers. This has been causing further panic and stress among these communities.

Over the last few days, with no Government assistance forthcoming, after losing all hope and patience, workers have picked up their bags and baggage, their tiny children, the elders and the women and have started walking on foot the journey of several kilometres in a desperate attempt to return back to their homes.

The State apparatus has constantly been advising the migrant labourers to stay back but such an expectation from the workers is not just insensitive and irresponsible but a violation of their fundamental constitutional rights. It is a matter of great concern as any coercive or intimidating measure in regard to forceful retention of these workers will lead to further psychological insecurities and loss of their trust in the Himachal government.

We also would like to put in the know of the Himachal government that the Haryana Government has provided free transport and food to many workers who walked more than 40 kms from Baddi to Panchkula, before being sent to U.P border. This goes to show that if the local administration and state governments have the will then this arrangement could be easily made. .

It is utterly shocking that the Cabinet of Himachal Pradesh while had the time and will to table and passthe amendment to the labour laws in the state to ease business and re-boost economy, had no inclination to respect the will of the workers to return back safe and secure to their homes.

It’s to be noted that with effect from 21.05.2020 to 20.07.2020, the H.P government has declared that the working hours for adult workers will be increased to 12 hours with one interval after 6 hours and that all factories will be exempted from the provisions of Section 51 (Weekly Hour), Section 54 (Daily Hour), Section 55 (Interval Of Rest),Section 56 (Spread Hours). Various trade unions and social organizations have opposed these amendments and called for its withdrawal.

Through this appeal we demand for the following:

It is the responsibility of State and administration to ensure that the dignity, the constitutional and human rights of these migrant labourers are protected and respected. This has also been reiterated by a recent order issued by HC of Uttarakhand where giving 24 hours, the court directed the state government to submit a detailed report on the mitigating measures taken in regard to the ration relief and the issue of Migrants stranded in the state stating whether these labourers wish to stay back or return, they are the responsibility of the UK state.

We urge the government of Himachal to take urgent proactive measures to ensure that migrant workers who want to leave the state are provided this support immediately and their rights and interests are constitutionally preserved.