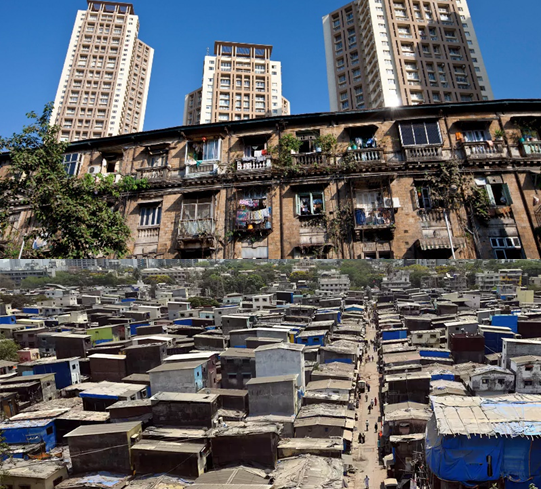 The impact of lockdown-affected is underrated currently amidst the world continuing (rightly so) with the Covid affected. Covid and lockdown are interrelated, their effects too are interdependent over time and space. Although there is right now no such thing like the Worldometers for lockdown, like the one for Covid, however if we collate the data of the rising issues of just suicides by depression and domestic violence, deaths by hunger and hatred, we may get shocking numbers way far than those affected by coron. Therefore, it is no exaggeration to say that those not affected by Covid are equally affected by the lockdown with long-term unaccounted physical-psychological impacts.

The lockdown impact is going to be more on people who are living in the high-middle rise buildings with barely a balcony to stand outside, an open space to stroll outdoors and in many cases even no balcony in the building and/or open space in the premise. We have heard from few people that they have not been out of their flats in the past four months out of corona fear.

This is dangerous! In contrast, those who live in a house on the ground including the low income-low infra housing, often known as slums, may have had a better living experience and lesser physical-psychological impacts. Now, when India is going on with the unlockdown with a big bang-bang (though many states/cities are returning to the lockdown with the upsurge in corona cases), one can relate the issue of physical-psychological impacts from the euphoria of the people to be outdoors in the public spaces like streets and bazaars, as a relief from the lockdown. Most of these people are middle-upper class living in the high-middle rise buildings.

After filling up the voids of home and in relationships for lockdown-unlockdown, cities have reached the singularity of ‘urban living.’ Locked up in the flats have made people realize the ‘make(s)’ and ‘mar(s)’ of vertical living or living in air in comparison to the importance of living on the ground or with soil. While a most middle-upper class urban migrants are content with their lifestyle in high-rise/apartments, arguably the deal-breaker during this lockdown-unlockdown periods for ‘quality of life’ is that- living stacked vertically in flats is no different than living in the informal-poor infra housing on the ground.

Factors and fathers of modern architecture post industrialization have redefined the life of urban civilizations with outlined pros and cons of vertical living. The idea of view, fresh air, isolation (plus or minus?) from a higher building with a considerable distance from the ground, is sublime. But at the same time, the number of studies and research on the ‘adverse effects’ of vertical living is growing since the high-density urbanization in the vertical format is fancied by the people as pumped by the politicians and planners of the cities. The understanding of ‘man-environment’ studies which deal with the psychobiological, psychosocial, and environmental issues of vertical living are aplenty.

For example, an old interdisciplinary article by Daniel Cappon on, ‘Mental Health in the High-Rise’ in 1971 bringing psychology and architecture of vertical dwellings highlighted these imperative intangible aspects (https://www.jstor.org/stable/41986998?). The relationship of peoples’ psychology and architecture is complex, as several aspects are interlinked and bidirectional in nature. The effects may not seem obvious as they are on a gradual leap. Children staying above a particular height from the ground face kinetic deprivation, a surge increase is experienced in lethargy/ restlessness. Adolescents in vertical living suffer the ‘block’ from creativity than the ones with easy accessibility to the ground. Mothers suffer anxiety when they’re unable to see outside from a window particularly their kids playing outside. Adults and old people have shortened life span with reduced physical activity. The inhuman scale and volume have altered peoples’ self-perception and self-esteem besides, the confidence being vulnerable to impulsive offences, thus increasing the rates of indoor suicides and crimes! Apart from these psychological effects, the structural hazards of vertical living are prone to frightening. For example, several people in Gujarat have developed phobia from vertical living after the devastating impacts of the 2001 Gujarat earthquake.

Although, slums are projected and proven to be the primordial showcase for the inadequate sense of well-being (Stokes, 1962. “A Theory of Slums. Land Economics”), which led skyscrapers, high-rise and low-rise apartments to have had a prerogative nature of a healthy lifestyle to the middle-upper class people. However, the ‘quality’ of the vertical buildings is on a ski slope marching downwards towards a point where it would be no different than that of the slums on the ground! For example, old apartments and high-rise towers in all the big cities are in distress of city’s visual impression, in other words a visual pollution with damp walls, building color peeling off, cracks, dirty glass windows, various overhangs of clothes, pots, compressors, etc.; which heavily influences the psychobiological and psychosocial aspects of living. They look very much like the slums we look down upon. Then every year, there are buildings that collapse resulting in human casualty and losses. What is ironic is that people living in those buildings may be well off as can be made from the interiors of the houses, however people are unwilling to come together for the overall upkeep of the building.

Interestingly, one of the densest slums of the world, the Dharavi of Mumbai, that is spread on 2.5 square kilometers of land (ground/soil) and in abundance with 6.5 lakh immigrant population, stood out in the covid-lockdown times amongst the realm of skyscrapers, high-rise and low-rise struggling to contain and cure. Despite poor infrastructure system like the sanitation, drainage, education and health, Dharavi has luckily stayed grounded with all its worries by keeping distance from the dozens of redevelopment projects with high-rise and low-rise buildings promised with a kind of ‘pseudo-betterment’ aka alleviated class or quality of life. Whether the people of Dharavi and other slums do not sense betterment in vertical living, or they sense remaining on ground offers as a better living as that relates with the lifestyle and occupation will be certainly be a worth study. Undoubtedly, the people of Dharavi and alike know that they can neither have shops and small businesses in the vertical nor their children can spend most of their day outside under the sun to remain connected with the nature, and their women can enjoy social-cultural living, besides they all building resilience for all kind of events and disturbances. The way covid and lockdown are managed in Dharavi, has a lot to learn about community led governance. One of the biggest critiques of vertical living is that the sense of community living is diminishing and, in many cases, especially high-end sky-scrappers it is non-existent, and the buildings are like Ghost Towers or towers were Aliens dwell. People barely know each other and come together for good or bad times, and even there are cases that people don’t even know their common wall neighbour and floor mates.

So, wonder whether people living on the ground including those in Dharavi are smarter than those living in the verticals? Or more Human than Machine? Also, wonder if those living in high-rise and low-rise buildings are offered living on the ground with good infrastructure, there will be only few wanting to live vertical for the sake of view and breeze. Definitely, Dharavi like living is not the option, but at the same time billions of people hanging in the air and peeping out of the skyscrapers, high-rise and low-rise flats is also not the desired option for human wellbeing. The reality of our cities is 355+ sky-scrappers in Hong-Kong, 290+ in New York, 40+ in Abu Dhabi, and 80+ in Mumbai. The aspiration of making Mumbai (and other cities in India) like Hongkong (and like Singapore, Shanghai, Manhattan) with contemporary looking buildings with expensive materials inside-out, needs a reality check. The concept of such vertical living isn’t disconcerting, but the very thought behind building them is certainly a concern! For example, buildings like 432 Park Avenue, Princess Tower, Central Park, or even mediocre apartments in Mumbai, have residents living a high lifestyle, but is the aim being diverged towards catastrophe, since the focus is more on the buildings than on the people who are living or will live in those buildings? Seems, the issue plausibly will not indulge one’s psyche subjectively but on a macro scale it is affecting, and we are witnessing the impacts in various ways that peoples’ physicality and morality are declining. Actually, we are living in air and digging our graves for a premature death of our civilization!

What is realized in the lockdown-unlockdown period is that apart from the tangible aspects of urbanization, the urbanites need a fraternity of community living where people can associate. With association, people may be willing to come together to engage in resolving built environment issues with respect to open spaces, water conservation, waste management, garbage, safety, health, education and many more. In other words, human interaction is crucial for the humanity to exist and humans living closer to the ground are more likely to remain happier and connected to nature including other humans.

How far have we gone in this race of high-rise high density living? Are there more to come? In the economy driven development, there’s practically no end to this. Ironically, the new redevelopment approaches are going to further the vertical living by piling up more vertical floors and density in the already densely lived place in the disguise of increase in the floor area ratio or the floor space index of a land parcel. The problem is that this is supported by the politicians, builders, and architects-planners with the economic narrative and without taking into consideration the physical and psychological impacts of vertical living on the human wellbeing.

So, we are living our life and contributing to the economy while striving to better our lives by being reluctant to the fact that we’re deteriorating the living in the first place! We must rethink this very notion of vertical living again by keeping ‘wellbeing’ as our concern as well as our goal. Let us not fail our intellectual potentials by limiting them with the structural grids and economic needs. This may sound utopia and a faraway heavenly destination, but the corona-lockdown times are making us realize a lot of things including the life hanging in the air. As a society we need to start somewhere to unlearn and relearn the idea of development with more empathy and ecology around to engage and make better cities. We owe this to our future generations!